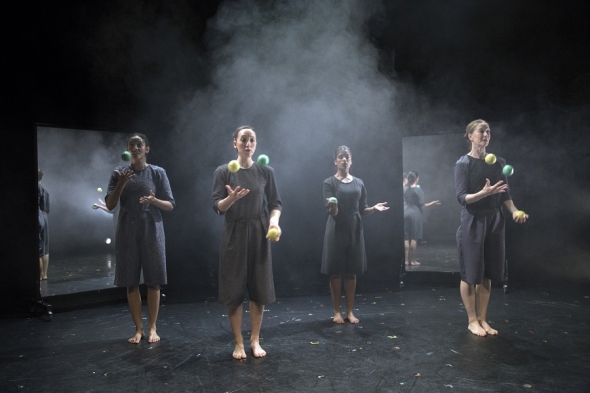 Original, different and unusual, this dance show has already attracted a lot of plaudits…

BHARATANATYAM and juggling might seem strange bedfellows but that probably isn’t quite the conclusion watchers of ‘Sigma’ would draw.

The hour-long performance comprising two jugglers and two Bharatanatyam dancers wowed audiences at the Edinburgh fringe last year and it was laden with several awards as a result.

Now ‘Sigma’ comes back for the first time and to the capital as part of the London International Mime Festival on Monday (January 15) and Tuesday (January 16) at Sadler’s Wells studio space.

It features the established British bharatanatyam figure Seeta Patel, who has worked closely with Sean Gandini, the man behind the London-based Gandini Juggling, which has performed all over the world and has a reputation for creative invention and innovation.

Gandini told www.asianculturevulture.com: “There are actually many affinities between bharatanatyam and juggling but the most obvious is the subdivision of time, which is very similar in bharatanatyam.”

The mathematical connections are very strong and ‘Sigma’ refers to that.

It is also about geometry and patterns and establishing a flow between two seemingly very different types of movement but which share more features than might be immediately apparent.

Patel wasn’t sure at first herself but Gandini’s exposure and fondness for Indian classical music proved a strong connection and a firm starting point.

Patel explained: “I can’t juggle or catch to save my life, so it wasn’t in the forefront of my mind, but over the years I have used counting methods (in bharatanatyam) – it’s unusual way to experience numbers and I started to understand.”

Patel said: “The rhythmic structures are the foundations of both dance and all Carnatic music (the style which accompanies bharatanatyam dance and also emanates from the south of India) and the rhythmic cycles get more complex.

“It all came together in Sean’s extremely magical mind…”

From accounts – www.asianculturevulture.com did see Sigma in Edinburgh and included it in its pick of the fringe – it is a fun and visually arresting piece and has its humorous moments too.

“There is some speech,” explained Patel. “We have a sequence of syllables (anyone who has listened to Carnatic music will be familiar with this – the taka-da, taka-da reptition) is replaced with the names of London stations.

“Every time we made a step forward (as a two different styles collaborating) Sean would add another layer of intricacy to it.”

Gandini does not perform in ‘Sigma’ and is the director. He has been juggling for almost 30 years and has been involved in other creative collaborations.

“The kind of juggling we do has always been filtered through the lens of dance and we have always been looking at juggling as a choreographable language.

“And I think this is like juggling going on a romantic date with bharatanatyam or a Tinder date with ballet,” he joked. “It’s creating a dialogue between these sophisticated dance forms. I am very intrigued about the refinement of these dance forms and the dialogue with us. I think it shines a nice light on juggling and that the process goes both ways.”

Patel explained that there isn’t a really a story as such (or traditionally as there is in bharatanatyam).

“It’s very episodic, it’s more like a circus-style piece. I was brought in as the choreographer and I have a lot of experience working with different dance forms over the last 15 years, so it wasn’t too much of a leap – for bharatanatyam to work in hand with other dance forms (such as contemporary) is not out of the ordinary.”

The piece was first performed in public outside in Watford in July and while it might have been an arresting sight for shoppers, it made more sense to move it indoors.

Gandini clarified: “There was a little bit of technology involved and playing with some lights, so we moved it inside.”

Off they went to Edinburgh and duly won awards and accolades – among them one of the top 10 Edinburgh Fringe feminist shows.

“That wasn’t intentional,” commented Gandini. “But some people read it like that.”

The pair hope to take ‘Sigma’ on the road in the summer in the UK and then further afield over the next two years.

“We’d love to take it to India,” said Patel who choose dance over medicine when it came to choosing her career and now performs mainly solos all over the world. She is off to Australia after ‘Sigma’.

She accepts bharatanatyam purists would not be comfortable with the idea of mixing a celebrated and respected art form with something (in India) you might still see on the street or at a circus.

Gandini added: “It’s my little fantasy in the longer term to have four bharatanatyam dancers and four jugglers and set it to live Indian classical music.

“It’s a festival of visual theatre and pieces which can’t fit easily elswhere.

“I think it’s good to provoke the (bharatanatyam) purists.”

Pictures: Courtesy of Gandini Juggling (except Seeta Patel portrait) and by ASH