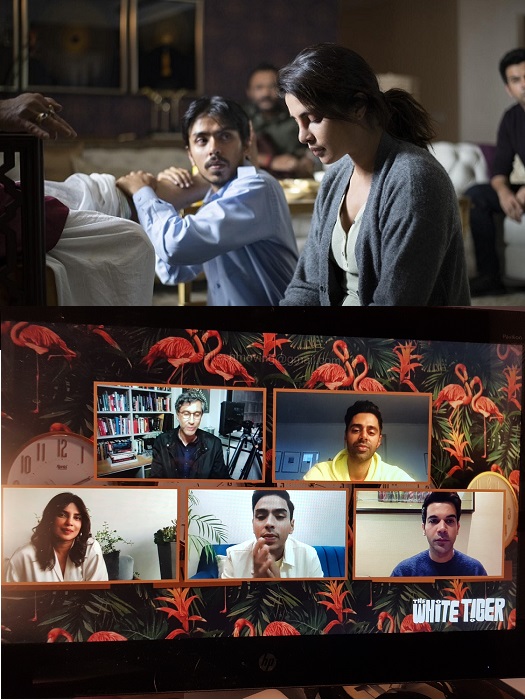 Screened to media last night and followed by a Q&A, ‘the brown and yellow man’ Hollywood film has arrived…

IN WHAT is likely to be a considerable media blitz, the talent behind the film, ‘The White Tiger’ sat down remotely with American comic and TV star Hasan Minhaj to talk about the film last night (November 14).

This screening was organised by the American Film Institute with many believing that it is a part of a push to get the film to be considered for the Oscars and other important high-profile awards ceremonies in 2021.

It is Gourav who steals the movie and makes its very much his own. He narrates throughout and is almost omnipresent.

Adapted from the 2008 Booker Prize winning novel, of the same name, by Indian Arvind Adiga, the film charts the rise of Balram Halwai, played by Adarsh with suitable panache and poise by the end.

He pretty much perfectly encapsulates this man’s rise from the poverty and obscurity of cutting coal as a young man in an impoverished village in Northern India, to being a wealthy entrepreneur in India’s own Silicon Valley of Bangalore or Bengaluru – as it is now. He gets a job as a driver to the wealthy couple, played by Chopra Jonas and Rao.

It is a meteoric and violent rise (towards the end), but Bahrani injects humour and a cynical – but ultimately seductive and winning – tone to Balram’s incredible journey from a shed and a shack to a plush apartment and wealth and power.

Reviews are officially embargoed until a release date is confirmed by Netflix – many expect it to drop on the streaming platform next month and it is likely to be in some cinemas, in some countries too.

The early reaction has mostly been very positive but some – this writer included – think the movie is a bit too long.

That aside, the first 80 minutes or so – or at least until the pivotal accident scene are terrific – Gourav on this evidence is one to definitely watch. He is mostly likeable and as a character understands his own faults, which really helps as his trajectory becomes darker.

Chopra Jonas for the first time in her film career plays an overtly Indian American character – ‘Pinky’ and she plays Rajkummar’s wife in the film.

Her performance is solid and assured, but some perhaps optimistically predicting Oscar nominations may have to wait for a more substantial part. Though her character is pivotal to the plot, she is not in it a whole lot. Last night, she said he had read the book and told her agent she wanted to be part of any film. She is also executive producer and passionately wants to tell this story.

Rajkummar (as ‘Ashok’) too is very convincing , but it is Gourav’s movie from start to end.

He is a classically trained Hindustani music vocalist and has fronted bands, appeared in ads and web series (according to his IMDB profile) and has had smaller parts in big Bollywood films, such as ‘My Name is Khan’ but to go from all that to this and fronting a Hollywood film is a huge leap and he excels.

Last night, he spoke about working in a tea shop for real to get an idea of what it was like to be someone like Balram – very low on the social ladder in India and indeed, the film is partly about ambition, desire and how to make it happen in a system almost criminally set against those without much in life to start anyway.

In conclusion, when Minhaj asked Bahrani and the others to say what they wanted viewers to take away from watching the film, almost unanimously, they said they wanted people like Balram to be treated better and to stop being “invisible”.

As we all know, it is one thing to show and make a film that articulates such a sentiment, but whether the world (and it is a global film) has that conversation is much more open to conjecture…

Much of the early focus already is on whether this film will be recognised at the Oscars and just how deserving Chopra Jonas is of a nomination – say her most fervent fans.

It isn’t Bong Joon Ho’s Oscar-winning ‘Parasite’ (2019) or Danny Boyle’s similarly successful ‘Slumdog Millionaire’ (2008) – there are definite similarities but it’s probably too knowing, and sardonic to probably generate that kind of era-defining ownership.

In an age when a young man or young woman can watch ‘The White Tiger’ in the remotest parts of the world on a little silver screen or a tablet/laptop, it could well be a timely and powerful ‘underdog’ film. Press that play button…