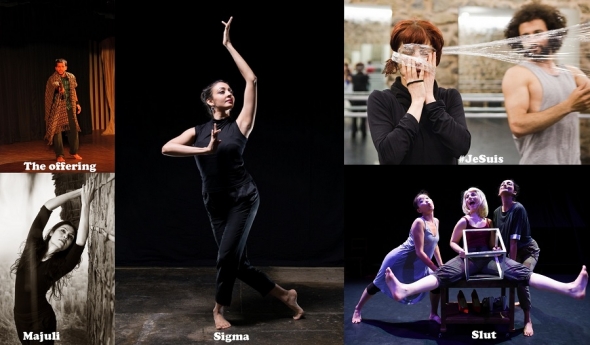 Shows that mix classical and contemporary and have something to say…

The Fringe Festival is under way (August 4-28) and we’ve selected a few shows dance shows which are well worth your attention, so take your seats…

#JeSuis (I am) _ Aakash Odedra Company
DANCER and choreographer, Aakash Odedra arrives at the Fringe to preview his first group work, ‘#JeSuis’, described as a “work in progress about living life in the midst of conflict”. He worked with seven dancers from Turkey whom he first met when he taught a workshop at Mimar Sinan University, Istanbul. The show is their collective response to the misinterpretations of their country, the rise in xenophobic attitudes and the displacement of people through conflict – all of which have inspired Odedra to create ‘#JeSuis’.
Dates: August 16-26
Venue: Zoo Southside, 117 Nicolson Street, EH8 9ER (Main House) 8.30pm (2 hours)
Box office tel: 0131 662 6892
Ticket/Info: http://www.edfringe.com/event/2017JESUIS_O5

Sigma by Gandini Juggling, featuring Seeta Patel
GANDINI JUGGLING is a company that is reinvigorating and reinventing juggling for the 21st century. Their artistic vision is to create “pieces which are never still, never sedentary and which demand the viewers’ engagement – with an aim to explore new artistic possibilities, allow insights, stimulate imaginations”.
‘Sigma’ is their new show that celebrates the dialogue between juggling, percussion and dance. The piece showcases exuberant rhythms, patterns and colours, at the heart of which is a unique interpretation of the classical south Indian dance form, Bharatanatyam. Performed by a virtuosic cast including the award-winning choreographer, Seeta Patel, with the trademark humour Gandini Juggling bring to all their work.
Dates: August 10-28 (no performances on Monday)
Venue: Assembly Hall, Mound Place, EH1 2LU (Rainy Hall) 1.30pm (1 hour)
Box office Tel: 0131 623 3030
Ticket/Info: https://tickets.edfringe.com/whats-on/sigma

Slut by Amina Khayyam Dance Company
THIS is a new dance piece created by dancer and choreographer, Amina Khayyam. It explores the impact of ‘labelling’ on women.
“As a teenager, I was labelled when I started to be independent and assertive. I was called ‘slut’ because I expressed my womanhood as I was growing up,” she said. ‘Slut’ is drawn from personal experience and inspired by the recent death of a close friend. The show uses the non-textual form of Kathak (a classical Indian dance form) – and is an ongoing personal exploration by Amina Khayyam of a technique called Ang abhinaya (body and expression), which she uses to create characters and weave a narrative.
Dates: 8 – 27 August (no performances on Mondays)
Venue: Summerhall, 1 Summerhall, EH9 1PL (Old Lab) 11.45am (55 mins)
Tel/Box office: 0131 560 1581
Ticket/Info: https://festival17.summerhall.co.uk/event/slut/

Majuli by Shilpika Bordoloi
A DANCE performance presented as part of the India-UK Year of Culture 2017
‘Majuli’ is a picturesque island in Assam’s mighty Brahmaputra River, and is also the world’s biggest river island.
A solo performance tells the story of the river and its people set to music with instruments indigenous to the region. The dancer, Shilpika Bordoloi meanders in the rhythm of a river expressing pleasure, pain, love, and spiritualism.
Bordoloi, who studied Bharatanatyam under Padmashree Leela Samson and later worked in her company, Spandan said: “The island has fascinated me from my early childhood days through frequent boat rides that I shared with my father.”
Dates: August 11-20 (No performance on August 14)
Venue: Dance Base, 14-16 Grassmarket, EH1 2JU (Studio 3) 6pm (50 mins)
Box office tel: 0131 225 5525
http://www.edfringe.com/event/2017MAJULJ_RZ

The Offering by Aditya Roy
A DANCE storytelling-cum-martial arts performance, looking at the relationship between the Guru and the Shishya, or Master and Student. (Yes, we know its martial arts, but the movement can be a lot like dance in some styles).
Aditya Roy said: “‘The Offering’ was written by me and my mother, who inspired me to go into Martial Arts by telling me stories of warriors from the past. Warriors who stood for more than their ability to just take lives!”. His mother, Puneeta Roy has also directed the piece and she is known for using theatre as a tool of empowerment with young people for over a decade
Aditya spent three years as assistant director of the musical production ‘Zangoora – The Gypsy Prince at the Kingdom of Dreams’ during which time he started looking for ways to integrate martial arts with theatre through movement workshops.
‘The Offering’ is part of a season of work produced by Teamwork Arts as part of The UK-India Year of Culture
Dates: Aug 12-13 and August 15-28 (no August 14)
Venue: C royale, Royal Society of Edinburgh, 22 George Street, EH2 2PQ (studio 2) 3.45pm (45 mins)
Box office tel: 0845 260 1234
Info/Tickets: http://www.edfringe.com/event/2017OFFERIN_BCY

Privacy & Cookies: This site uses cookies. By continuing to use this website, you agree to their use.
To find out more, including how to control cookies, see here: Cookie Policy
← #JeSuis’ (review) – Aakash Odedra’s first dance collective piece is stunning and unforgettable…. (European premiere)
Waris Hussein breaking through BFI Season – Emmy and BAFTA winning director talks about ‘Doctor Who’, Richard Burton and ‘A Passage to India’ and ‘Edward & Mrs Simpson’ →