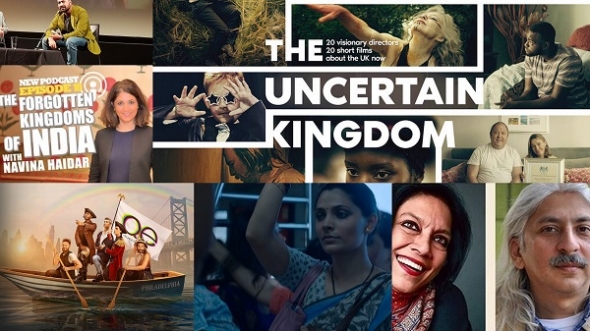 This is the time to delve far and wide, and explore new worlds…

It was one of the highlights of last summer and is coming to a device near you for the Autumn now…The Jaipur Literature Festival, better known colloquially as, JLF, is coming back to the British Library and it starts with a curtain raiser tomorrow (June 6)! The full festival is going digital – between September 11-13. However, this weekend – there will be a sneak preview with four special sessions. The festival made the announcement on its Twitter feed earlier this week.

The first curtain raiser sees Sanjoy Roy, managing director of Teamworks, which organises the festival and film director Mira Nair in conversation on Saturday (June 6). Nair made a film about intra-cultural relations between black and Asian communities in her 1991 film, ‘Mississippi Masala’ and no doubt the pair will touch on George Floyd and Black Lives Matter as current topics. More generally, ‘From Salaam Bombay to A Suitable Boy’ will be the theme of this discussion. Among the other authors participating are Professor Peter Frankopan, the historian behind the best-selling ‘Silk Road’ – he will be discussing the relevance of trade and international relations in the midst of today’s global Pandemic with another of JLF’s leading lights, William Dalrymple, co-founder of the original JLF and co-director. Also announced on Twitter and one of the other curtain-raisers is best-selling author and now diplomat Amish Tripathi who heads up the Nehru Centre in London.

Nobel Laureate and President of The Royal Society Sir Venki Ramakrishnan will be part of the concluding session on Sunday (June 7). The eminent scientist will discuss the Coronavirus Crisis and what medical research and other tools can helps us to combat the spread of this disease and others in the future.

The festival has been broadcasting a series of talks under the subject, ‘Brave New World’ – you can find these on the festival’s Youtube channel.
You can catch these coming curtain raisers on the festivals Facebook, Twitter and Youtube channels (see links below). The first sessions starts at 3pm (British Summer Time – BST); 10am (New York, Eastern Standard Time – EST) and 7.30pm (Indian Standard Time – IST) on Saturday (June 6); and the final session begins at 4.30pm (BST); 11.30am (EST) and 9pm (IST) on Sunday (June 7).

Anurag Kashyap is one of India best known independent film directors and for thee first time a feature film of his has just dropped on Netflix.
‘Choked – Paisa Bolta Hai’ which is about India’s Demonetisation – when overnight in November 2016, Indian rupee notes of ₹500 and ₹1,000 became illegal and had to be handed into banks and replaced with new notes (and questions being asked, of course) – has got people talking.
There have been rave reviews for lead Saiyami Kher (pictured) and some believe it’s among Kashyap’s (pictured top left of main picture) best work to date.
Often labelled India’s Tarantino, Kashyap is one a band of directors who work outside Bollywood but still make popular films that also find global audiences. He also directed ‘Sacred Games’, a Netflix series that enjoyed much international success.
See ‘Choked’ here – https://www.netflix.com/

Out now on Curzon Home Cinema is ‘The Uncertain Kingdom’, a unique collaborative project encompassing 20 short films by a variety of filmmakers and features a number of directors and actors from diverse backgrounds – looks like all of the 20 have something to say about modern Britain.
Among these is Bafta Breakthrough Brit Ray Panthaki (‘Official Secrets’ and ‘Collette’). He directs ‘Ernie’ – a story about a lonely school caretaker who begins to fall under the influence of dangerous right-wing propaganda amidst a difficult family background.
Ellen Evans is behind ‘Motherland’ which tells the story of “Jamaican-born Brits who have been forcibly returned to their ‘home country’ by the UK and describe their experiences”, says the blurb about the film.
Lanre Malaolu directs ‘The Conversation’ which explores “the conversation black people face when communicating their racial experience to white partners through a dynamic fusion of dance and dialogue.”
Described as “fiction – original stories inspired by our uncertain reality”, it is split into two volumes.
To view and more, click here –
https://theuncertainkingdom.co.uk/watch-at-home

TAN FRANCE is back with his fashion buddies doling out the advice to people who need to spruce up and look just fabulous!
France (Tanveer Wasim Safdar), probably the best known face of the ‘Queer Eye’ series on Netflix, grew up in Britain, and is a fashion designer by background.
The programme now in its fifth season first started out as ‘Queer Eye for the Straight Guy’ but now offers fashion makeovers regardless of gender and/or sexual orientation.
Effervescent France (pictured centre) released his memoir, ‘Naturally Tan’, last year.
You can find out more/view here – https://www.netflix.com/gb/title/80160037

Ever wanted to know what South Asian treasures The Metropolitan Museum of New York has without having to travel there…
Asia House, the business and cultural institute in central London has just dropped ‘The Forgotten Kingdoms of India’ podcast with Navina Haidar, curator in charge of the Department of Islamic Art at the museum. Asia House says: “This was a land of great natural wealth that produced striking art and a culture of tolerance – a land where at least one sultan saw himself as both the ‘son of Ganesh’ and a follower of the Prophet”. This podcast is number 10 in Asia House’s ongoing ‘Converging Paths’ series, showcasing arts and cultures of the Islamic world.
You will find the episode here – https://asiahousearts.org/arts-in-isolation-podcasts-2/

These listings are a little later than usual but please do email listings to editor@asianculturevulture.com by 5pm Tuesday, June 9 for online offerings that start from Thursday June 11 at the earliest…thanks!

Privacy & Cookies: This site uses cookies. By continuing to use this website, you agree to their use.
To find out more, including how to control cookies, see here: Cookie Policy
← ‘Women Make Film’ – Why director Mark Cousins wanted Sharmila Tagore as a narrator and several Asian directors’ work featured…
‘The Uncertain Kingdom’ – heartrending and diverse portrait of nation from 20 distinctive talents →