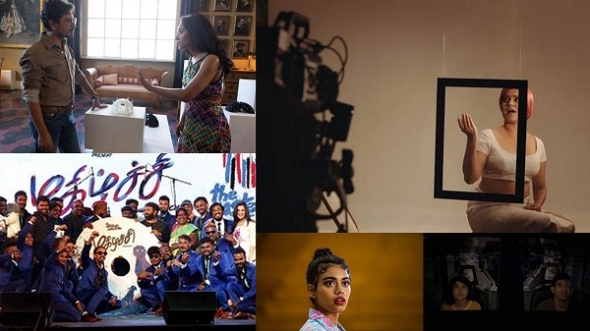 Earlier this year, the Bagri Foundation London Indian Film Festival (LIFF) went digital but with the opening of cinemas, it’s a 100 per women directed films that are now screening…

FANS of independent South Asian cinema, both from the West and the subcontinent – rejoice, you can enjoy the big screen experience as the London Indian Film Festival (LIFF) hosts physical screenings, from today (September 17) till the weekend. And it’s an intriguing line-up…

‘Shut Up Sona!’ is a fascinating look at the Indian music scene and one of its most outspoken voices. Sona Mohapatra talked to us about the making of the film – and also, importantly about the situation of music artists in India.
She came to prominence during the MeToo explosion in India in 2017 and wasn’t afraid of calling out some big names and there was a serious backlash. All this is covered in the film made by Deepti Gupta, a talented cinematographer who steps up to helm this unique 85-minute documentary – which Sona describes as a love letter to India and more…

ACTOR Tannishtha Chatterjee (above right) is best known in the West for playing the lead character in the film version of Monica Ali’s best-selling and 2004 shortlisted Booker Prize winning novel ‘Brick Lane’ (2007).
The well-established indie actor who has also appeared in ‘Lion’ (2018) and ‘Parched’ (which opened LIFF in 2016) has made her first feature now as a director.
She spoke to us in Cannes last year, as she continued to work on ‘Roam Rome Mein’. It’s a deeply personal story and with another indie acting icon Nawazuddin Siddiqui ( pictured above and in‘Manto’) in a lead role and the gorgeous city of Rome – another character in itself, in this tale you should not miss.

It screens today (September 17) at 8pm Cine Lumiere and is preceded by a short film, ‘Natkhat’ (‘Brat’) about trying to teach a young boy about women with Bollywood star Vidya Balan in the lead role.

INDIAN sci-fi comes in the form of ‘Cargo’. Executively produced by Anurag Kashyap, India’s best-known indie director, this film sees a spaceship that stores the dead and preps them for rebirth. Directed by Aarti Kadav, it’s a fantasy spectacle to be enjoyed on the big screen – and with a (covid-complaint) crowd!
It comes to the BFI Southbank for Friday (September 18) 8.30pm
Tickets – here

HOT on the heels of ‘Never have I ever’ comes ‘The Miseducation of Bindu’, an American high school teen angst drama comedy, told from the perspective of a female friendly protagonist.
Prarthana Mohan directs Megan Suri in the main role and well-known actor Priyanka Bose supports. Executively produced by David Arquette and the Duplass brothers.
Saturday (September 19), 7.30pm. Cine Lumiere (see address above)
https://www.institut-francais.org.uk/cine-lumiere/whats-on/festivals-series/the-miseducation-of-bindu/

LAST but certainly not least in any way, is ‘Breaking Barriers’ – a documentary about a band that is fighting injustice and caste discrimination in India.
Based in the north of Chennai, Tamil Nadu, the group – The Casteless Collective and led by controversial and famous ilm director PA Rajith, the documentary explores what the band is trying to do as it welcomes and often sings folks most marginalised by mainstream Indian society – LGBTQ+, and other minorities.
It’s on Sunday (September 20), 5pm, Cine Lumiere https://www.institut-francais.org.uk/cine-lumiere/whats-on/festivals-series/breaking-barriers-the-casteless-collective/

On Tuesday (September 14) Cary Rajinder Sawhney, the founder of the London Indian Film Festival and its director and Naman Ramachandran, the festival programmer, came together to discuss their respective careers and how they came to work together on LIFF (click on picture to watch). Part of arts organisation Manch UK’s continuing series.