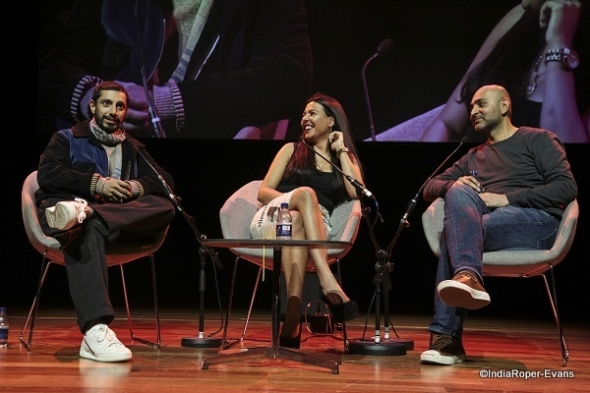 A manifesto for change…??

STRETCHING culture, creating gaps and altering some mainstream and loaded narratives is all part of an alternative vision Riz Ahmed put forward at his recent London Literature Festival talk.

In a wide-ranging discussion mostly on culture, Ahmed powerfully distilled some of the most pressing cultural issues of the day – saying that even from his shortened name – Riz, from Rizwan/Rizwaan – much could be read – and misread.

The actor, writer, musician (and activist), made a rare UK appearance at the festival’s end on Sunday (October 28), alongside novelist Mohsin Hamid and moderator Kieran Yates to discuss Migration and Magic.

Yates is a journalist and cultural commentator and also a co-contributor to Nikesh Shukla’s hugely successful ground-breaking and award-winning collection of essays, ‘The Good Immigrant’ (edited by Shukla and a crowd-funded initiative).

Ahmed is another contributor and is the showrunner for the forthcoming (2019) ‘Englistan’, a nine-part BBC2 drama series which will chart the history of a British family and its three generations, who are of Muslim heritage.

Expanding on previous thoughts (“a citizen of nowhere but with a visa to go everywhere”) in his BBC The Big Asian Summer interview with Nikki Bedi, Ahmed suggested that the most interesting parts of culture are at the margins, with people trying to create a space and narratives that include them.

Smith’s novel ‘White Teeth’ (2000) is often celebrated as the voice of a minority culture writing itself into the fabric of British (and English) narratives – making the nation’s minority groups visible and relevant.

Ahmed suggested this is the space he likes to work in himself, inserting, interjecting (even) and stretching culture and opinion and thought, to the point where minority communities are – no longer marginalised or made invisible or as is often the case within a larger narrative – disrespected and abused.

He told the audience that his parents had given him the name Rizwa(a)n but he had shortened it to ‘Riz’.

“We are a nation of one-syllable names – Dave, John, and now Raj, Dev…” he said, half tongue-in-cheek.

He felt totally at home with the idea of being Riz, but every time he stepped into the cab of an Arabic-speaking (or influenced) driver, he became ‘Rizwaan’ – he joked.

This was his idea of changing a narrative, slipping yourself into it and stretching the idea of Britishness or Englishness to be more inclusive than it might be at present.

There is now a Riz and Dev to add all the Daves and Johns, all of whom might be English and British.

“I don’t like the term political,” Ahmed said, which some use to describe his general stance (and activism).

The point being, that it is often, though not always, a label used to categorise and neutralise what he is saying.

Two of his current films illustrate how far he has come and how some have listened and responded positively to his arguments for Representation – not Diversity (which he likens to a burger topping, not unappealing in itself, but slight and superficial).

In both ‘The Sisters Brothers’ and ‘Venom’ he plays non-ethnic characters and brings his own admirable sensibility to them.

“We want representation,” he mused at the talk. At the Toronto International Film Festival, acv was able to ask him about his role in ‘The Sisters Brothers’ – which also featured in last month’s London Film Festival.

Colour-blind and open casting are important, he argued in letting people see talent and letting the character do the work.

Humorously, he posited that it does not work the other way around – you do not need a white actor to play Othello.

Hamid, whose last novel, ‘Exit West’ – was declared by President Barack Obama as one of the best he had read in 2017 – sees a couple migrate from one global city to another in search of a settled life, told the audience about his decision to move back to Lahore, Pakistan.

Show of hands – who are the brown people in the audience?

He had first left the country of his birth to study in the US and has worked in both in the US and London. His two later novels ‘How to get filthy rich rich in rising Asia’ (2013) and ‘Exit West’ take place in mostly unnamed cities – unlike his first novel, ‘Moth Smoke’ (200), which is very much centred around Lahore.

His decision to return was made because of family – his parents have an active role in his children’s lives and while it was not perfect, it offered him the best sense of ‘home’, he had experienced, he said.

The talk started humorously with a ‘bet’ (between Ahmed and Hamid, as to what the ethnic make-up of the audience would be). Ahmed claimed he had won and casually estimated that the audience was about 75 per cent non-white, through a show of hands. To acv, it looked more like 60-65 per cent.

Towards the end in an open Q&A session with the audience, there was aslo a short discussion about ethnic minorities and mental health prompted by a question.

Ahmed said he was proud of his psychiatrist brother who has done work in the area. He affirmed his support for talking more openly about mental health issues as a community and looking at how much racism might play a part in contributing to people’s breakdowns and mental health issues.

Prior to Sunday, Sir Salman Rushdie and hip-hop poet Akala were among those that could be heard at the London Literature Festival (October 18-28 2018).

Some talks are already available as podcasts https://soundcloud.com/southbankcentre_book_podcast

And a video of this talk is set to be published.

*There are more Literature talks at the Southbank Centre, including Michelle Obama, launching her memoir, ‘Becoming’ exclusively in the UK on December 3. For tickets & details, please see here http://asianculturevulture.com/portfolios/riz-ahmed-and-mohsin-hamid-at-london-literature-festival/