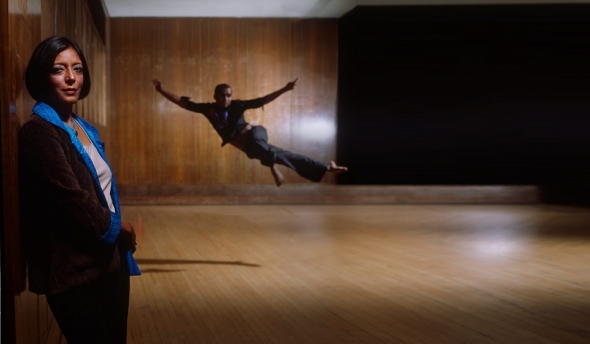 YOU WOULD think marking 25 years as a choreographer and being commissioned to produce a new show to commemorate that achievement at the South Bank would be a special thing.

But it isn’t quite all that, for Shobana Jeyasingh and the dance company she founded all those years back.

Shobana Jeyasingh Dance has performed internationally, is critically acclaimed for its 55 productions, and Shobana herself, born in Chennai in 1957, has an MBE (1995) for her services to dance, and yet there is something more basic and simple that gives her an overriding sense of satisfaction.

“I feel that every year if I’ve survived one more year, I have achieved quite a lot,” she told www.asianculturevulture.com very modestly.

Of course, for anyone involved in the arts professionally, life is a tricky business and earning a living can be precarious; dance perhaps more so, where productions can easily eat £100,000 quite quickly.

Trained in Bharatanatyam, an Indian classical dance form, she has gone onto become one of the most original and exciting contemporary dance choreographers of her generation.

A work from last year, “Too Mortal”, created to be performed in churches, was premiered at the Venice Biennale, an arts exhibition of global repute.

Jeyasingh represents what seems like a significant moment in the art form – mixing the ancient with the contemporary to create new work which speaks of both east and west, old and new, hope and despair.

Her latest composition, “Strange Blooms”, premiered earlier this month at the South Bank as part of a special double bill that included her first work as a choreographer, “Configurations”.

The 80-minute show reflected her myriad cultural influences and has something deep and profound to say to all of us.

The two pieces on the surface are very different – the first, “Configurations”, is obviously Indian and informed directly by Jeyasingh’s training and experience in Bharatanatyam.

The second part, “Strange Blooms”, looks nothing like it and is a clear departure from her Indian roots, but it isn’t, if you care to look deeper, as she explained. Blooms looks modern, futuristic, and is slightly unsettling.

“What I am drawing inspiration from is Indians themselves and what I am seeing Indians (Asians) doing in Britain,” she reasoned.

“They are being incredibly smart – in a wardrobe, they will have jeans, a sari, a shalwar kameez, a designer dress.

“They have given themselves a brilliant choice and they can culturally improvise.

“It is the triumph of Indian ingenuity and that is what inspires me and makes me feel like an Indian.”

Adaptability, flexibility, a position open to change and growth look like the vital elements that lie at the heart of her latest work and that process of adjustment or transformation, in some readings, is both telling and revealing about Jeyasingh herself and her art.

Almost as an aside she added: “It is something about being an expat – we are the last to see the changes we ourselves are making.”

She is not only seeing it – but articulating and giving expression to it in dance.

On one level, it is very subtle and almost unnoticeable – after all dance is a stimulation of our more basic senses, not a prod to our intellect.

Yet in “Strange Blooms”, which is both beautiful and slightly unnerving, there is an essential statement about both what it means to be alive and how people from different backgrounds have had to live to get on.

“People like us who live in big cities and migrants have had to be inventive, work very hard to survive and be active. In that sense, plants are a bit like people.

“Plants do everything they need to survive and they do it quite brilliantly. They’re not kind of emotional things, but they’re very efficient and very ordered and that’s certainly a quality people seem to have these days.”

Involving nine dancers in all, with the women outnumbering the men, it has a haunting, brooding, uncomfortable feel to parts of it.

The metallic and slightly militaristic nature of the music by contemporary composer, Gabriel Prokofiev, adds only further tension and dread.

And yet there is beauty and hope when the dancers are in some form of union and collaboration.

Some of the thinking behind “Strange Blooms” came from Jeyasingh’s association with academics at King’s College University, where she is a knowledge producer.

A dialogue with a neuroscientist prompted her to think of the differences in how people observe life today.

In the past, it could only be done by looking at dead things under a microscope, today there is live imaging and looking at things as they grow and adapt and it shows in “Strange Blooms”.

“I was making a mental change from being a dancer to a choreographer and I first made it for myself and then other people.

“It was a pleasant change. I’ve always enjoyed choreography more than dancing.”

This debut work seems inspired by the kind of work that goes on in rural India: tending to the fields, looking after animals, and dealing with the natural elements. It also suggests an innocent joy about being in the outdoors and enjoying the company of others in a collective enterprise.

It is full of energy, grace and simple delights and backed by the Benyounes Quartet, made up of two violin players, and a viola and cello player each, playing Michael Nyman’s specially commissioned music live, “Configurations” possesses both power and beauty and is easily recognisable and understandable to an audience with an appreciation of Indian classical dance.

What slightly rankles Jeyasingh is that she wants her audiences to appreciate more than simply the culturally specific.

“It’s a comment I hear all the time – any Indian who comes to see anything I do will always look for something Indian and I don’t know why that is so. I feel there is a big Indian element there because I made it.”

She seemed to want to add: “Isn’t that enough?”

“We should be a little bit more sophisticated about how we define Indianness,” she argued.

That was all the more apparent in India itself when Jeyasingh was able to take “Faultline” (which is now on the GSCE dance syllabus), and was composed after the 2005 London bombings and “Bruise Blood”, which featured the beatbox artist, Shlomo, to India.

Funded by Indian multinational firm, Tata (which owns JaguarLandRover, among other UK concerns), her troupe performed in Bangalore, Delhi and Mumbai in 2010.

“It would be lovely if the Indian business in community (in Britain) would give us a little bit more support in terms of finance.

“Tata wanted to project an image of contemporary Indianness, which is just as important as heritage India,” declared Jeyasingh.

“When we were there, the young waiters in Bangalore watched us rehearsing and they never said: ‘This doesn’t look Indian dance’.”

In “Strange Blooms”, she had nine dancers of differing nationalities, in “Configurations”, only one was Indian and he lives in Australia, two were Malay Muslims, and the other dancer, a woman, was part Chinese, part Indian.

All her work is informed by more basic considerations about what it means to be Indian or of Indian origin and living in the UK.

“I see it a bit like swimming upstream, with a speed and kind of attention and particular dynamic quality that comes from being an Indian in Britain – that is the way we experience life. It is not easy, we hold onto one or more things, have multiple identities, and nothing is taken for granted.”

Next year, she hopes to take “Strange Blooms” on tour, but for the moment she is busy making a short film commissioned by Central St Martins College of Art & Design.

It will form part of an exhibition called “Lens on Life”.

“It’s really about getting the average person to think more about cell division, in the future one of the big decisions will be about stem cell research,” she explained.

Again, she pointed out, there is a similarity to plants and the dynamism of human cell division will be represented in the film.

Looking even further ahead to 2015, Jeyasingh will be involved in a project commissioned by the Royal Opera House, looking at the impact of eastern dance styles on western classical forms, to create a new work.

It will perhaps take off where “La Bayadere”, a Russian ballet with an eastern theme, written by 19th century French choreographer, Marius Petipa, left off and a work she is looking at closely.

Jeyasingh, slightly tongue-in-cheek, reassured www.asianculturevulture.com that this will have a discernible Indian element but there is no need. We understand.

“The world is changing. Indians lead remarkable lives but they don’t always tend to notice it.

“If you are going to do contemporary dance then Bharatanatyam is not going to die, it has survived 4,000 years and one is not a threat to the other, it’s like chappati and rice…you can like and have both.”