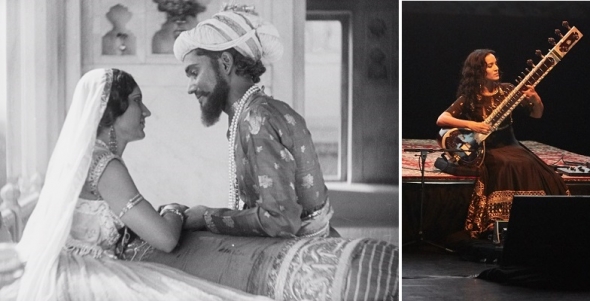 It was billed as one of the highlights of the recently concluded London Film Festival (October 4-15) and those at the Barbican witnessed something that will stay with them for a very long time, writes our guest critic…

AT THE GALA for the British Film Institute (BFI) restored ‘Shiraz’ with a live musical score by Anoushka Shankar, there was of an air of expectation amongst the many guests who attended the pre-screening reception held earlier that evening.

Much excited chatter and talk circulated around the room as to the final score and restored film itself.

At the end, no one was left disappointed – the audience appreciated the screening as well as the music score with thunderous applause and it will be fascinating to see how Indian audiences react – as the next destination for this extravaganza is a four-city tour of India.

Although, the film was made in 1928, the music was both traditional Indian and Western construct and all credit must go to its composer, Anoushka Shankar, who very much combined the sounds which gave her a large canvass to build her score on.

It would be correct to say that only Anoushka could have brought about this aspect with her vast experience at a relatively young age.

Anoushka has been exposed to the incredible music experiences from around the world.

The music in this film was commissioned to Anoushka Shankar, daughter and disciple of the great sitar maestro Pandit Ravi Shankar, who in the late 1950s composed the iconic music score of ‘Pather Panchali’ – part of the Satyajit Ray’s Apu Trilogy. The score he composed was done overnight with some of the finest Indian musicians of the time.

This film score brings out a variety of orchestration to suit the visuals and the scenes with much depth, so as to give it a rich texture with subtleness and finesse.

Anoushka’s sensitive approach to music is commendable, as she had to balance carefully the demands of the variety of scenes, without losing the narrative or musical consistency.

At the screening, the music was played live, the ensemble was seated in front of screen facing the audience with small monitors for each section of musicians to follow scene sequences for the score.

Anoushka sat centrally playing the sitar on a raised platform and around the left, seated Indian style crossed legged were percussionists Sanju Sahai and Pirashanna Thevarajah along with Ravichandra Kulur on bansuri flute, and on the right of her, on chairs were the western musicians Idris Rahman, clarinet, Preetha Narayanan, violin, Danny Keane cello and piano and Christopher Kemsley on harmonium and moog.

‘Shiraz’ was one of the few surviving silent films entirely shot in India with the collaboration of Indian, British and German production team.

Both Himansu Rai, the star of the film and Niranjan Pal who wrote the original screenplay, are considered to be the early pioneers of Indian cinema and initiated the making of the film as a part of East West partnership.

Germany’s Franz Osten directed the film with the help of British technical crewmembers. Together, they produced two other silent films – ‘Light of Asia’ (1926) and ‘Throw of Dice’ (1929).

‘Shiraz’ is set in the 17th century at the zenith of Mughal rule and it is about a fictional account of two love stories centred on the princess and the events, which led to the construction of Taj Mahal, the ultimate symbol of love.

The second one between Crown Prince Khurram (played here by Charu Roy) who later went on to become the Emperor Shah Jahan and Selima who after marriage came to be known as Mumtaz Mahal. It was in her memory that Taj Mahal was built as an expression of his love.

The story begins with Shiraz a son of a village potter, who rescues a baby girl from an ambush.

As the two grow up, Shiraz falls in love with Selima, all – unaware of her royal birth.

The young Selima is kidnapped and ends being sold to the Crown Prince Khurram.

Shiraz, unafraid of his fate, follows to protect her at all cost which eventually allows him to enter the royal palace, only to be betrayed by the deadly courtesan Dalia (played here by Seeta Devi, born Renee Smith).

However, Shiraz had some respite after his winning design of the Taj Mahal was accepted by the prince who liked it following a competition.

Anoushka’s score on the evening was a world premiere and a one-off for the country of her present residence, and commissioned by the BFI itself.

The restoration of this rare film was based on the only surviving British version of the film, as the both the German and the Indian versions were presumed lost.

The BFI and its team should be lauded for their valiant effort to bring this project to its fruition and together with the British Council’s support, it contributed to the UK-India Year of Culture – a Celebration of India’s 70th year of Independence.

*Jay Visvadeva is an artistic director of SAMA (www.sama.co.uk)
He has been at the forefront of artistic activities in the UK for more than 40 years.

Listing
‘Shiraz: A Romance with India’ with Anoushka Shankar’s score plays Hyderabad, Kolkata, Delhi, Mumbai, from November 1-5, in association with the British Council. The tour to parts of India has been made possible with the kind support of Qadir Ali Baig Theatre Foundation in Hyderabad as part of the Qadir Ali Baig Theatre Festival 2017 and Sangit Kala Mandir in Kolkata.

Shiraz as a live event returns to the UK in early 2018 and will be released on Blu-ray by the BFI.