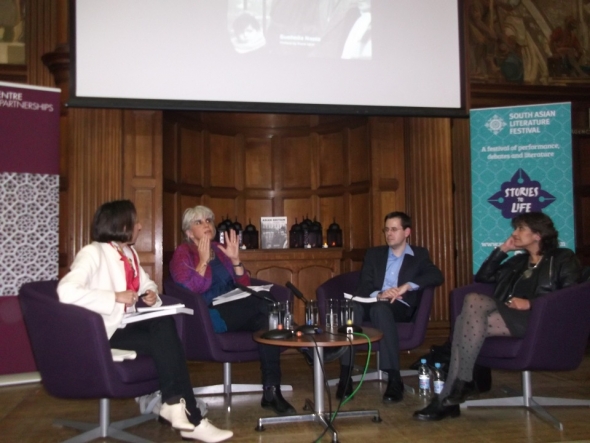 IT MAY have got more compact and modest this year compared to its previous three, but the South Asian Literature Festival still managed to pull some punches and land some cool blows.

Despite this and the best of intentions, there were also some misses at this year’s festival from October 23-November1.

The other was the marvellously loquacious and gracious Amish Tripathi, who on his first visit to London (official or otherwise) mesmirised his audience with a mixture of philosophy, humour and humility in ‘Epic Stories – From Mythology to Imagination’ last Tuesday (October 29) as festival co-director and compere for that session Bhavit Mehta, let Tripathi tell very much his own story.

His trilogy of books, headed by his debut novel, ‘The Immortals of Meluha’, has been a million-plus, ker-ching-type best-seller in India, and has revived interest in Hindu stories, which he regards really as ancient histories, replete with philosophy that should not be necessarily seen through the prism of a particular religion, (more of that later in another story).

While those two talks were of particular note, there were four other sessions we covered – ‘Distant Traveller, The Life and Work of Attia Hosain’; ‘Speaking Out! Queer Desi Literature’; ‘Reporting Across Borders, India & Pakistan’; and the opening event, Asian Britain, A photographic History’. ‘Reporting Across Borders’ is covered here http://asianculturevulture.com/portfolios/conflict-without-end-india-and-pakistan/

If we had to pick a favourite – the last event, ‘Addictive Cities’, was remarkable for the Thayil’s contribution, which was almost as hypnotic and powerful as the drugs consumed by his characters in ‘Narcopolis’.

Elsewhere, the others all had something to recommend them, but in overall terms, the quality of debate varied quite markedly, and this was often down to the moderators and how they wanted to frame the debate among the panellists.

‘Speaking out! Queer Desi Literature’ was a well-attended event and there was a real opportunity to delve a little deeper into issues surrounding supressed or marginalised voices.

While it was great to see and listen to open and frank discussions about homosexuality, sexuality, gender roles and identities within the UK South Asian community, too much of the time the debate was general and superficial, and did not get underneath the subjects to an audience that was already sympathetic and probably aware to a degree.

Director and scriptwriter Aleem Khan’s short film clip about a transgender Indian man trapped in the UK in more ways than one – perhaps better crystallised the issues; and both his and Bobby Tiwana’s own personal testimonies powerfully addressed the need for more education and understanding and gave genuine insights into family issues faced by many whom do not conform to often enforced stereotypes.

Iman Qureshi and Sharmila Chauhan through their writing showed they are battling against those very boxes and labels and are giving voice to a richer level of representation, but the debate moderated by non-professional Fiez Mughal (and not through any particular fault of his) failed to get above and beyond the issues to address parts of the community that remain in denial or are hostile – and reject such forms of existence, living and loving.

The opening talk last Wednesday (October 23), ‘Asian Britain, a photographic history’, was let down by not having enough pictures from the book, ‘Asian Britain’, to project onto the big screen (hampered by copyright issues apparently).

While many of the pictures give a unique and hitherto unseen portrait of the community, the debate failed to capture the path-breaking nature of this work.

BBC TV arts reporter Razia Iqbal (far right) spoke with clarity and depth, using the pictures as a springboard to talk about her own experience as a child migrant, already displaced from Kenya with her family and arriving in South London amid racism and hostility in the 1960s. She has written the preface to the book.

Authors Susheila Nasta (second left) and Florian Stadtler (second right) probably had much more to say, but the lack of pictures and the slightly abstract conversations their absence engendered led to muted contributions, too much between the panel themselves really.

The usually very reliable broadcaster and presenter Bidisha (far left), whom we understand was a stand-in-moderator, wasn’t able to shape the debate – bar Iqbal’s – into coherent forms. It all seemed a bit disjointed and bity.

These criticisms may seem harsh written in this way, but they are not meant personally at any one person or contributor. Sometimes the form of the debate failed them as much as us – as an audience.

Festival directors Bhavit Mehta and Jon Slack deserve praise for keeping the festival going with reduced funds and little to no private backing and putting on a programme with real appeal.

The debates can only be as good as the contributors and moderators they are able to attract – and perhaps in this, more contrary voices need to be pitted against each other; moderators must be more attuned to what the audience is looking for; and must be ready to open the floor to questions, sooner rather than later, with an emphasis put on speakers addressing the audience and not themselves. Questions and contributions from the floor were sometimes more enlightening and sharper than from those on the podium.

All these points are made in the hope that next edition will be yet stronger and more popular for addressing them and if only to emphasise, the South Asian Literature Festival remains a much valued and wonderful opportunity to give a much deserved and necessary platform to Asian writers and the issues that exercise them.
Sailesh Ram, editor www.asianculturevulture.com