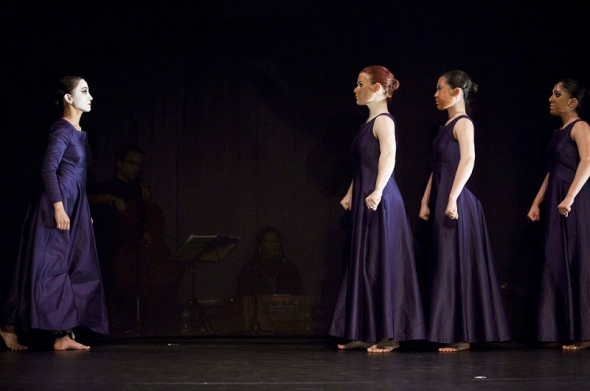 IN THE years before global dance sensation Akram Khan brought Kathak into the mainstream, it was virtually impossible to find any sort of female counterpart.

But that could all be changing if the example of Amina Khayyam, who is currently touring the country with a production of ‘Yerma’ is anything to go by.

The British-trained Kathak dancer said Khan, who appeared in a dance sequence at the glittering opening ceremony of the Olympic Games last year and holds an MBE for his services to dance, has released people’s imaginations.

“He’s really brought it into the mainstream and has opened up a lot of opportunities for Kathak dance.

“They now study his work at GCSE and A level,” Khayyam told www.asianculturevulture.com, just as her own company’s tour of Yerma got underway last month.

Like Khan, Khayyam comes from a British Bangladeshi background, but her family were not terribly keen on her learning to dance.

“I was always interested in dance as a child, but I come from a very orthodox Islamic family where my parents were not going to hold my hand and take me to a local dance school – that was never going to happen.”

As a 16-year-old with a little more freedom, she attended local dance classes under the direction of Kathak specialist Sushmita Ghosh in Croydon – not far from her own home in Oxted, Surrey, where there were hardly any people of colour at the time.

Khayyam did so discreetly at first under the guise of shopping, without her family really knowing.

“I always wanted to do classical dance – and Kathak was on my doorstep, and it was an instant love affair and going to Croydon was my way out into the community – it was nice to see Asian and black people.

“In Oxted, it was a bit horrible because of the racism.”

Her family lived in the village because her late father had a business there.

She studied dance and trained in it, becoming professional in 2001 and setting up her own company, Amina Khayyam Dance in 2007.

Yerma is adapated from the iconic Spanish playwright Federico Garcia Lorca’s 1934 work of the same name.

Lorca, also a poet, is one of the giants of Spanish literature, and ‘Yerma’ was part of a rural trilogy of plays that broke new ground alongside ‘Blood Wedding’ and ‘The House of Bernada Alba’.  He was shot dead in 1936 by the right-wing militia as the Spanish Civil War began.

The plays attacked conventional conservative thinking and were especially modern in the way they championed the rights of women.

Yerma deals with the trials and tribulations of a married woman who does not have any children.

“There is a stigma about that. I didn’t realise the extent of it in the Asian community, until I went to work with groups and women from sheltered homes where they are fleeing domestic violence, rape and other horrible issues.”

She takes productions to them and also encourages women to see the work being performed.

“This allows them to feel they are not alone and do not have to  suffer in silence,” said Khayyam, who has done a lot of outreach work with her dance company and worked extensively with a dramaturg in adapting the work for a dance show.

Younger girls sometimes in these homes show the talent to dance.

“They’ve never had the opportunities because of the background they are coming from and are often supressed – dancing has a big effect.”

“The play has a lot of characters and I have the same dancers playing multiple characters but Yerma is the same.”

Khayyam, who gave birth in 2001, no longer has to hide her vocation from her own mother.

“When I started (learning) – she’s a gentle person – and said in that typical Asian way ‘you do what you want but don’t ask me to talk about it, it’s on your head’.”

But having seen her daughter excel and make a name for herself, her mother has changed?

“She told me: ‘Okay, you have been dancing for a long time, when are you going to get a real job’?” Khayyam recounted, laughing.

Privacy & Cookies: This site uses cookies. By continuing to use this website, you agree to their use.
To find out more, including how to control cookies, see here: Cookie Policy
← ‘Pahuna’ – writer-director Paakhi Tyrewala talks about World Premiere at TIFF and support of Bollywood star Priyanka Chopra
‘Victoria & Abdul’ – On the Red Carpet at Leicester Square with Ali Fazal, Eddie Izzard and others… →