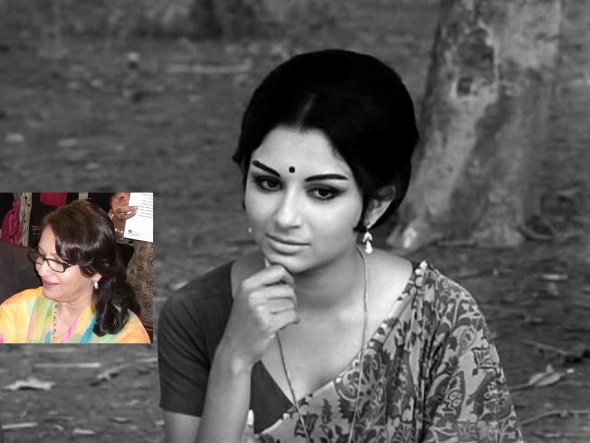 WRY, witty, and almost singularly engaging – that could be the verdict on iconic director Satyajit Ray’s more contemporary-looking body of work.

What sometimes gets a little overlooked are the marvellous actors who complimented and enhanced many of his subtle gifts as a director.

Perhaps, most famous of them all, to a non-Bengali audience, is Sharmila Tagore.

A Ray find at just 13, she became one of his most celebrated muses, appearing in several productions and on Monday (September 16) she spoke a little about her work with Ray and introduced two films in which she starred, ‘Days and Nights in the Forest’ and ‘Company Limited’ at the British Film Institute (BFI) on the South Bank, London.

Both films are entertaining, thoughtful, and masterful in their depiction of change and human foibles – with her character inciting powerful reflection and self-revelation.

It is clear that Tagore continues to hold Ray in the highest esteem and is only too glad to have made a personal contribution to the BFI’s first major retrospective of Ray in ten years.

She recounted how Ray had first brought to her film and what impact the films had made on her.

“I love the opportunity of talking about Ray,” she told the audience in discussion with a senior BFI programmer. “He was a bridge between Bengal and the rest of the world and I love standing on that bridge.”

Ray remains a colossus in world cinema, cited by countless directors, both past and present, as a genius and major influence on their work. Martin Scorsese and the late Akiro Kurosawa are just two such Ray acolytes.

Tagore, who had just returned from Los Angeles, where the Academy of Motion Pictures Arts and Sciences (to you and me, the Oscar people), has been restoring many Ray prints to their original glory, said she found the response to his work there, ‘overwhelming’.

The Academy actually awarded him an honorary Oscar in 1992, not long before his death and discovered many of his films were in a poor condition.

Currently 18 have been fully restored by the Academy and at a recent showing of the Apu Trilogy there, the first of Ray’s films (from the 1950s) to make a huge impact, Tagore said they continued to connect strongly with audiences.

“It was a large theatre, and full and it is over 60 years since the film was made – and it was being shown and admired in another country and another culture.

“It (the film) transcends cultures, it just shows the commonality between us and there is a timeless quality, you feel that it (the film) is speaking to me and is something which exists for me and that’s why even today’s generation are touched by something, filmmakers and viewers alike.”

Ray first cast her in the last film of The Apu Trilogy as the child bride of Apu, the character he had first introduced into our world as a little boy in ‘Pather Panchali’ (1955), his debut feature.

It was not an easy introduction to cinema by any means. Tagore, just 13, was at still at school.

She described how Ray spotted her at school (‘He followed me’???) and made contact with her father.

“We were not allowed to see his films,” revealed Tagore. “Film was still very new,” and thus treated with a certain amount of suspicion.

“A couple of Ray’s film had already been released, so my father said it was a great honour to work with Ray, but my school didn’t (see it that way). My school principal said it would be a very bad influence on me as a girl.  So, I was asked to leave/choose…well, I wasn’t asked…

“I had to change from a Bengali medium school to an English medium one, it was highly dramatic and changed my life.”

Certainly working with Ray on her first film at 13 on ‘The World of Apu’, has stuck with her and said she has come to notice some things only more recently.

Tagore outlined the scene where Apu brings his child bride back to his home and none of it was planned or much designed by Apu in the film.

“Soumitra (Chatterjee/Apu) and I were standing outside the closed door on the set and the camera was the other side.

“So, he opens the door, looks back at me and says, ‘come in’, I cross the threshold and enter the room and look around for a couple of minutes more and sigh and there are a couple of extra shots and I sometimes wonder whether he kept that particular scene on purpose because Aparna, the character  –  and I –  had no idea what lay across the other side, nor did Aparna, she had no idea when the door opened what was there.”

Tagore said as a 13 year old she was used to taking orders and never questioned Ray, so much so that he was jokingly referred to as God.

Tagore also spoke about the background to ‘Devi’(1960), perhaps the only film in which Ray tackled some of the darker aspects of Hinduism head on.

In the film, Tagore plays a young girl who comes to be worshipped as the goddess Kali, the deity of destruction and creation, and the film pits the first rise of ‘modern Indian nationalism and rationalism’ against ‘entrenched dogmatic patriarchy’ and not everyone was comfortable with the stark portraits in the film, set in the 1860s.

Ray was on more comfortable terrain with ‘Days and Nights in the Forest’, a deft study of young men from Kolkata, holidaying in the forest guest house.

Each character is a foil for the other and the quartet represent a model of both the failings and flailings of the male species, especially when confronted by the opposite sex.

Tagore described it as a ‘romantic comedy’. Whether she is familiar with the work of Richard Curtis (‘About Time’ 2013), we shall set aside.

Days and Night is closer to 19th century Anton Chekov’s dramas than Curtis – quiet comedy beneath the shallow displays of machismo.

The women, generally, come out of it better and the tension and suspense between the lonely widow and the smitten Sanjoy are just one of several scenes that wrestle with us as much as  the characters themselves.

Perhaps far less subtle and nuanced is ‘Company Limited’ – an almost full on satire of the corporate go getter who mixes charm and cunning to achieve his thrusting and selfish climb to the top.

It’s funny and a cross between ‘Mad Man’, circa 1970 Indian style and the David Mamet scripted ‘Glengarry Glen Ross’.

Tagore plays the much adoring sister-in-law who still holds a torch for the man her sister married (a situation not uncommon in traditional arrangements where the man will come to see one girl and leave with the intention of marrying a younger sibling).

Bright, curious, coquettish, and highly desirable, Tagore plays Tutul with a mischievous and intelligent air, that in another day could only lead to deceit and divorce, but this is India 1970 and there ain’t no stopping the smug Syamal.

The end, as Tagore intimated in her introduction, is not a happy one, but its emotional power comes from the proceeding procession of delight that befalls Syamal when he achieves his much vaunted ambition but the film, and Tagore’s character, ask more pointedly, at what price.

It’s a surprise no one has made modern versions of both films, but then there would be a lot to emulate and perhaps Ray’s strongest legacy is that he makes everything look so easy and effortless, with the camera no more than what seems like a neutral observer of human follies. It is anything but…

Pictured: Sharmila Tagore in Days and Nights in the Forest; inset as she is now.