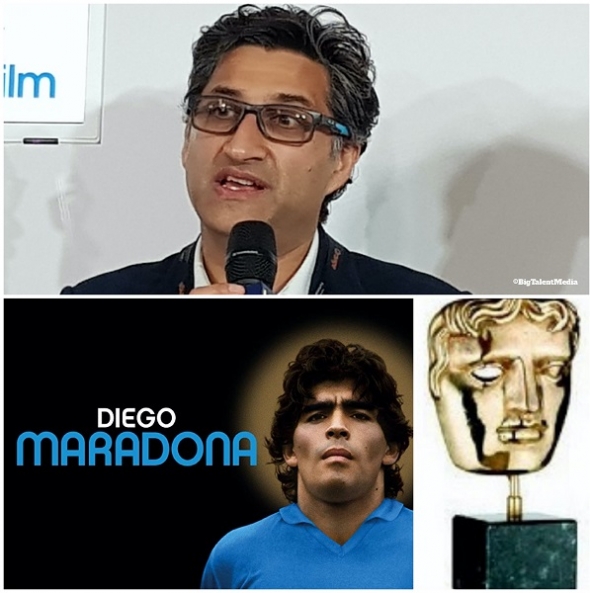 The full nomination list of BAFTAs was released this morning with multiple nominations for the ‘Joker’, ‘Once Upon a time in Hollywood’, ‘The Irishman’ and ‘1917’.

Among foreign language films, ‘Parasite’ has four nominations and is in the best film category alongside the above films. It also has nods in Film Not in the English Language, Director and Original Screenplay categories.

It premiered in Cannes last year and took the top prize – the Palme d’Or and has been rapturously received everywhere since. South Korean Bong Joon-ho’s film is a black comedy satire about the haves and have-nots and is the first Korean film to be garlanded with the top prize at the Cannes Film Festival.

On Twitter, Kapadia (pictured above) said he was honoured to have been nominated in such a strong category and thanked the people who worked with him on the film in both Italy and Argentina. The documentary is up against ‘American Factory’, ‘Apollo 11’, ‘For Sama’, and ‘The Great Hack’.

‘Diego Maradona’ tells the story of one of the most gifted footballers to have ever played the game and the documentary focuses on the star’s time in Naples playing for Napoli, winning two league titles in Italy and spearheading the Argentine national team. It was a tumultuous period in a life full of ups and downs for the globally recognised phenomena that he was – young and impressionable and from a rough part of Buenos Aires, he mixed with some dubious company, as Kapadia’s film explores.

Kapadia’s film also enjoyed its world premiere at the Cannes Film Festival and was the highlight of our week at Cannes. (See below for more).

Kapadia is one of the most decorated British filmmakers of recent times. Both his previous documentaries, ‘Amy’ (2015) and ‘Senna’ (2010) have won BAFTAs (and he also has an Oscar for ‘Amy’). In addition, he won a BAFTA for his first full length narrative feature, ‘The Warrior’ (2001). His short film, ‘The Sheep Thief’ also won a prize at Cannes in 1998.

In the category for casting, Sarah Crowe has been nominated for her part in ‘The Personal History of David Copperfield’. Dev Patel plays David Copperfield in Brit Armando Iannucci’s adaptation of Charles Dicken’s classic novel. The film releases on January 24 and contains a very diverse cast. It had its world premiere at the Toronto International Film Festival (TIFF) last year and www.asianculturevulture.com spoke to Patel there.

Michael Ward, who appears in ‘Blue Story’ is one of the five actors nominated in the EE Rising Star category. He faces competiton from Awkwafina (Nora Lum), the US rapper who starred in breakout indie hit, ‘The Farewell’ and other actors Kaitlyn Dever, Kelvin Harrison Jr, and Jack Lowden. The EE Rising Star Award is voted for by the public. EE are the sponsors and the awards are known as EE BAFTAs.

Amanda Berry, BAFTA head, conceded on the radio this morning that there was not a lot of diversity in the nominations – she, however, pointed towards the short film categories as a sign that change is coming.

In the short animation category, Maryam Mohajer has been nominated for ‘Grandad Was A Romantic’ and Naaman Azhari for ‘The Magic Boat’. Both have Iranian heritage.

On Twitter he reacted to the news, saying he was “speechless” and that it was barely believable that a project that started in his bedroom had now been nominated for a BAFTA.

In the short film category, Berry – talking to BBC Radio 4’s Today – pointed out that four of five nominations are for women directors – among them is Myriam Raja.

The BAFTA nominations follow a day and a half on on from The Golden Globes held in Hollywood and are effectively the starting gun for the awards season that will culminate with the Oscars on Sunday, February 9.

The BAFTAs will be held the week before.

Priyanka Chopra and husband Nick Jonas were in attendance at the Golden Globes and presented one of the awards. (See her Instagram post here).

British TV comedy ‘Fleabag’ and film ‘1917’ directed by Sam Mendes were among the high-profile British wins on the evening.