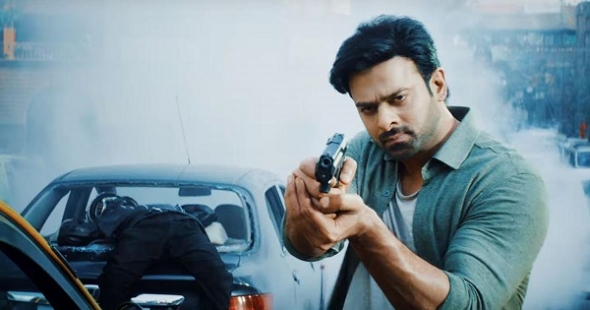 IT IS ONE OF THE MOST eagerly anticipated films of the year in India and beyond – as new idol Prabhas is the lead in the forthcoming mega-budget Indian film, ‘Saaho’.

The blockbuster had been earmarked for an August 15 – India’s Independence Day – release but has now been put back to August 30.

Prabhas himself indirectly thanked the producers of ‘Chhichore’ on his Facebook page for putting off their film’s release till September 6. Their film stars rising Bollywood star Sushant Singh Rajput and Shraddha Kapoor, who is also the female lead in ‘Saaho’.

The trailer for ‘Saaho’ has already clocked up an incredible 80 million views – far above the average of around 25 million for a Bollywood film.

‘Saaho’ been shot in four languages simultaneously – Telegu, Tamil, Malayalam and Hindi – which is not common except for the very biggest films from South India.

‘Darling Prabhas’ as he known by his legion of fans, and his for gentle and unassuming manner (when not in character) has made a very different film to ‘Baahubhali’, in which he made his name as an international hero.

The budget for ‘Saaho’ is around £35m – which is considerably above an average Bollywood studio budget of around £10m.

There are a host of well-known names from Bollywood who are lining up as Prabhas’ foes.

Directed by Sujeeth, a well-known screenplay and Telugu dialogue creator, and produced by UV Creations and T-Series, the trailer already hints at the story – a mysterious hero (we don’t know his name yet) holds his friend (Shraddha Kapoor) in his arms, then follow underwater scenes, unarmed combat, motorcycles, flying trucks, weapons, and desert scenes.

This tale will take us to many different locations, with film shots in Mumbai, Austria, Romania, Croatia, Abu Dhabi, and Hyderabad from the famous Ramoji Film city studios.

Months of training were undertaken by Prabhas to reach the international standards expected for such fight sequences and he worked with well-known Hollywood stunt director Kenny Bates for the motorcycle scenes.

www.asianculturevulture.com (ACV) : What was the inspiration to create ‘Saaho’?

Spokesman from UV Creations (UVC): The genesis of the of the movie started with an idea that was sown in the mind of the director when he read an Adolf Galland quote about, “If the hunter Becomes the hunted” – which then in the course of time took the shape of an idea and then transformed into a story which was the base of ‘Saaho’ and there were then inputs from Sujeeth.

ACV: How did it develop from there?

UVC: Vamsi and Pramod (two very well-known producers from UV Creations) took it on. Their priority was a strong script first and foremost. To tell a story like this on celluloid, we required the best talent in all departments involved. That is why we have renowned technicians like Madhie as the director of photography and Sabu Cyril who is ranked as one of the best production designers in India.

ACV: How did you come to cast Shraddha Kapoor in the role as the heroine?

UVC: Shraddha is both strong and demure at the same time. The director wanted to cast someone who could portray both the shades of the character with ease and elan, and Shraddha who is known for her stellar performances in her previous movies was considered the best choice to play this role.

ACV: What training did Prabhas undergo?

UVC: Prabhas studied martial arts for the action sequences which were choreographed by Pen Zheng and he was trained to ride the motorbike safely in scenes choreographed by well-known Hollywood stuntman Kenny Bates.

ACV: The scale of the production sounds immense, can you tells us a little bit more about that?

UVC: There was one particular scene shot in Abu Dhabi which took many days to shoot and required a lot of prep work. A crew of 400+ assisted. Bates’ scenes took 30 days alone to shoot.

ACV: Who are the bad guys ?

‘Baahubali: The Beginning’ was released in 2015 and no one quite expected it to do the business it did.

The mythological story, based loosely on a mixture of Hindu scripture and folk tales, propelled ‘Baahubali’ into a top ranking domestic and international hit.

When the makers, director SS Rajamouli and Arka Media Works (the production company) came round to ‘Baahubali: The Conclusion’ in 2017, it was well and truly a franchise on its own in Indian cinema.

A film originally made in Telegu and with regional stars had made it to the top table.

SS Rajamouli, Prabhas and Rana Daggubati and Anushka Shetty became household names in India. The final instalment crossed the £100m barrier and there have been many spin-offs.

The director and music director, SS Rajamouli and MM Keeravani will be at the Royal Albert Hall* on Saturday, October 19 for a live orchestra playing the music score of the first instalment of ‘ ‘ ‘ ‘Baahubali‘ – look out for our competition to win a pair of tickets to the spectacular concert – if you want to enter sign up to our newsletters.

And read what happened when SS Rajamouli, Anushka Shetty, producer Shobu Yarlagadda, and music director MM Keeravani came to London and talked to www.asianculturevulture.com about ‘Baahubali’ when it had a screening in 2017.

*We will be telling you more about ‘Baahubali: The Beginning Live ’ at the Royal Albert Hall very shortly, stay tuned on Twitter, Facebook and Instagram and do not miss!

Privacy & Cookies: This site uses cookies. By continuing to use this website, you agree to their use.
To find out more, including how to control cookies, see here: Cookie Policy
← Suriya and other South Indian film stars in London for puja and launch of new blockbuster film
Eastern Eye Arts, Culture and Theatre (ACTAs) awards 2018 – Wise words on an inspiring evening →