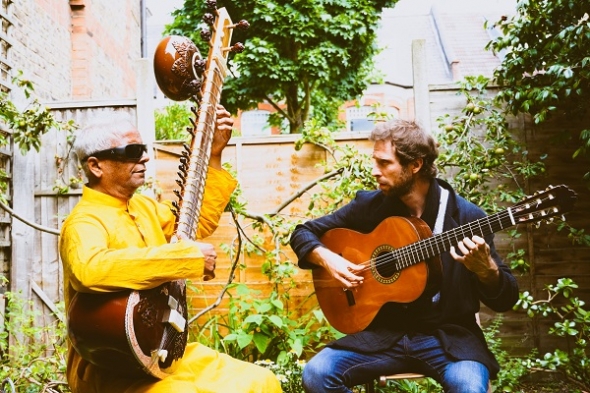 Two different string instruments but with a common ancestry…

FLAMENCO guitar and sitar don’t sound like an obvious natural pairing – but their roots lie in a similar source and their power is about to be unleashed in a contemporary way.

Both traditions developed out of India and flamenco came to Spain via travellers from Rajasthan in the 11th century.

Baluji, as he is better known, is a musician of great versatility and is at the start of a UK tour, playing with a number of different musicians, and exploring his Indian classical background with other artists from different traditions and genres.

Last year he played Dilruba (a string instrument with a bow to make the sound) on a track with a Spanish pop sensation, Malu.

He began his Interactions tour last month and Saturday’s concert is actually, on and off, the culmination of a three-year musical journey for the pair.

“The whole Interactions tour is very exciting for me,” Baluji told www.asianculturevulture.com in a face to face interview from his rehearsal space/home in north London. “I play light classical Indian music and it’s up to people how they take it and interact with it.”

The Interactions tour began with Baluji playing at the Manchester International Festival and rendering a traditional set with Sukvinder Singh Pinky on tabla, and Baluji on sitar.

The tour is a way of him saying that the classical sitar can be an instrument of collaboration outside of its Indian classical context.

“Flamenco links the whole world to me,” continued Baluji. “Flamenco strokes on a guitar are very similar to the sitar. “I’ve played with Flamenco dancers and much before this in the 1980s with Manitas de Plata (the stage name of one of the best known and globally renowned Flamenco guitarists of that time).”

Monteverde, who first met Baluji at a party for his OBE honour in 2016, started casually jamming with Baluji initially.

In the same interview at the Baluji resdence, he said: “It was difficult to match the sound.

“The sitar and the guitar share the same range, when we play together it sounds like a lot of information and it’s difficult to digest.”

At the concert at St John’s in Hoxton, both will play solo initially and then together.

Baluji said there is strong connection between them and they both respect and enjoy each other’s work.

Baluji stated: “It’s about the vibrations (as sounds), we like each other’s sound and there is certain chemistry and connection.”

Monteverde, who is a classiccal music producer by background, elaborated: “The important thing about the connection is to wait and listen to the other person and give space to the other musician – it’s about understanding and giving space, that’s why a lot of jams don’t work. There is the issue of who plays on top. We did a lot of rehearsals to get it right.”

Monteverde hails from Buenos Aires, and moved to London after a stint studying and perfecting his flamenco guitar in Spain. Conveniently, he lives close to Baluji in Highbury.

Baluji continues to tour through the UK, till December 3 where he ends it, playing at the British Museum in the South Asian Gallery on International Day of Disabled Persons and combining it with storytelling.

The tour is full of personal collaborations alongside musicians versed in other traditions, such as Gamelan (Indonesia), Opera with well-known Indian soprano Patricia Rozario in late August (see tour link below), and music from Brazil with Cantar Fusing.

ACV readers will know that Baluji has his own orchestra – made up of blind musicians and when we interviewed him in 2014, he expressed a desire to tour with them – that has now happened last year, Inner Vision became Antardrshti (Hindi for inner vision) and toured India, playing in Delhi, and at the Royal Opera House in Mumbai. The Inner Vision concerts also had a story telling element and that was taken from the Bhagavad Gita, a scared Hindu text.

Baluji also plans to record three albums this year. He will be playing sitar and traditional Indian Spring raags on one, celebrating the six seasons experienced in India (as opposed to our four) and then recording a new album with some of the recent collaborations.

He was given a prestigious award – the Hind Rattan – by an Indian organisation earlier this year that recognises the contributions of those of Indian origin living in Britain.

The pair also featured on Radio 3, this week and were also due to play for London Live as well ahead of the Saturday concert. Baluji also plays with his wife Linda’s group, Orient Jazz. She is a singer.

The tour is supported by Arts Council England.

For the rest of the tour: https://www.interactionsbaluji.uk/