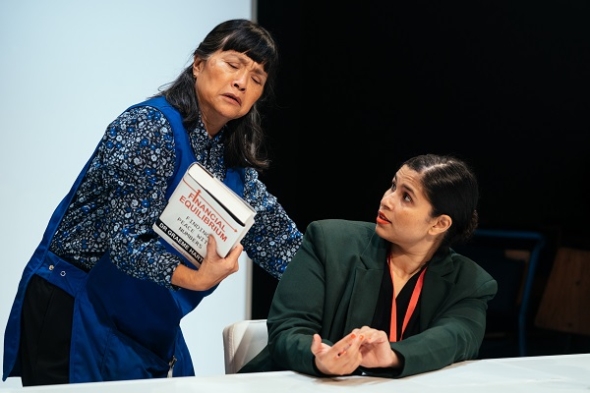 ROLES for female artists of colour are often few and far between and in most cases you have to create the work yourself – however once in a while a play comes along with a rich storyline that puts women centre stage.

One such play is ‘Rice’ by Australian Asian writer, Michele Lee, a two hander with performers Zainab Hasan and Sarah Lam, which the author describes as creating “cool roles for women of colour”.

‘Rice’ is a story of Nisha (played by Hasan) an executive officer working in a corporate sector, and Yvette (played by Lam), a cleaner at her office.

The two strike up an unlikely friendship. Nisha is trying to pull off a deal to get rice distribution in India, while Sarah is worried about her daughter, Sheree who gets involved in eco protests – a role also played by Zainab.

Set in Melbourne, they both have Australian accents and they also play a lot of other characters too.

www.asianculturevulture caught up with Zainab Hasan who explained it was one of the reasons why she decided to take up the role.

“I’ve never seen two woman who look like Sarah and I, who come from our background, on stage together taking up space for 90 minutes, it’s a brilliant challenge. It’s also about doing meaningful work.”

What is absorbing is the interplay between the two and the different perspectives the characters offer – both being of immigrant heritages.

“Nisha comes across as full of hubris, she can be quite mean but she is quite vulnerable underneath. She has a lot to prove, and both women are very driven by emotions.”

The bigger themes in ‘Rice’ deal with issues of globalisation, migrants, mothers and daughters, office politics, and the show is directed by Matthew Xia, and is a co-production between the Orange Tree Theatre and Actors Touring Company.

Hasan who was born in Southall and raised there comes from a South Asian background – her dad is mixed race from South Africa, while her mum is Asian. She is the eldest of three siblings, and attended school in Greenford and Harrow. Later she went to Queen Mary, University of London to study English and Drama – but she did the ‘bare minimum’ of drama, because she didn’t enjoy it.

“I found the English course a lot more interesting as I got to do all sorts of things like learn about the colonial novel in India, black writing in America, literature of Israel and Palestine, ”she revealed.

However, when she left university she got involved in many youth theatre companies including the National Youth Theatre which she considers to be her platform into performance.

Hasan is so distinctive and audiences will have seen her in ‘The Motherhood Project’ a film project exploring motherhood by Katherine Kotz with Battersea Arts Centre performed online in 2020 where Hasan appeared in the short film ‘Untold’ written by Jodi Gray.

Other credits include ‘Living Newspaper Edition 1’ (Royal Court) and ‘The Welkin’ at the National Theatre which was cut short due to lockdown. ACV also remembers her as Miriam in the Royal Shakespeare’s company production of ‘Tartuffe’ in 2018 directed by Iqbal Khan.

Hasan is very articulate and thoughtful on the subject of representation in the arts.

“Considering the Asian presence we have in the UK, it is really poorly reflected in the arts. I don’t know whether or not we’ve really explored the potential of Asian artists and Asian contribution to the arts in the way really that I think it should be. Maybe there is going to be a renaissance of some sorts.”

As an artist she is extremely self-aware and understands how she is seen and represented in her work.

It’s equally important to do roles not defined by your race it’s about getting the balance right.”

“Culturally specific stories are important but for far too long Asians have been stereotyped – particularly women are seen as meek, docile, subservient, we’ve got this clash of culture, we’re living under the thumb of a brute patriarch who is not allowing us to be ourselves – there is a real stereotype of Asians and our stories, but actually they are lot more layered complex and interesting!”