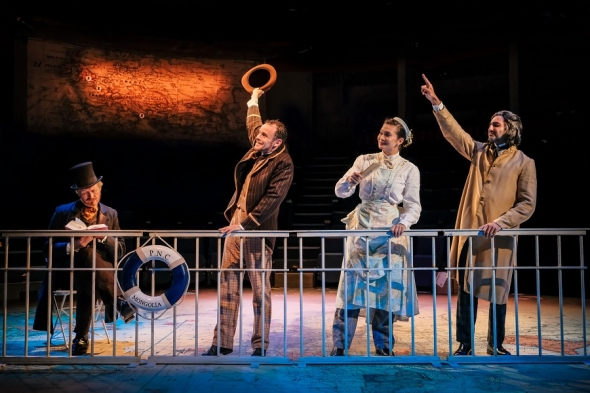 IT’S one of the best-known stories around and continues to enthral and entertain and a leading light of this production is Pushpinder Chani.

Chani plays ‘Mr Naidu’ and 18 other characters in this new stage production of ‘Around the World in 80 Days’, the Jules Verne classic novel. It will be touring the country after completing its stint at Cadogan Hall in London, next Saturday (September 2).

It’s billed as great holiday entertainment for all the family and it doesn’t disappoint.

The premise is simple, a single rich gentleman Phileas Fogg (Andrew Pollard), runs his life like clockwork. He does the same actions every day, goes to the Reform Club, plays whist and returns home. One day, he accepts a bet of £20,000 to circumnavigate the globe and go around the world in eighty days.

“I can’t pick out a moment when I am not enjoying it,” Chani told www.asianculturevulture.com coming on stage right at the beginning as ‘Valet number One’ ensuring that his master, Mr Phileas Fogg’s life runs with precision and one day he’s a bit late, so he’s immediately replaced by a new valet, Passepartout (Michael Hugo).

This immensely popular show has been doing the rounds since it initially premiered at the New Vic Theatre, Stoke in 2013 and Chani been associated with it since then.

Directed by Theresa Hoskins, this show gives us a world on the stage, featuring 125 characters, six trains, five boats, four fights and an elephant!

“It has a feel-good factor, people come on a journey around the world with us, and music and sound effects are just another character of the show enhancing the audiences’ enjoyment,” answered Chani.

It is replete with more visual artifices such as throwing money across to each other and catching it.

“It’s all an illusion and the movement of your body,” explained Chani. “Naidu wants to help Fogg as much as he can as he likes him and wants to see him succeed.”

The novel was originally published in 1873 when Britain was very much an Empire and the adaptation by Laura Eason has some brilliant one liners alluding to the stiff upper lip characteristics while poking gentle fun at prevailing pretensions at the time.

“A true Englishman never jokes when talking about a wager,” muses Fogg, who insists on taking his Bradshaw Guide with him as there were no Google Maps to help him on his journey.

They follow the route of going from the UK to the Suez to Bombay (Mumbai) by steamer; then Bombay to Calcutta (Kolkata) by rail – but not all the track is built so have to rely on an elephant; then more rail and steamer journeys, to Japan, USA and back to Blighty.

En route they experience world cultures, play whist, meet baddies, drink tea, while Fogg rescues an Indian woman, Mrs Aouda (Kirsten Foster) from committing sati (the ancient practice of a widow immolating herself on her husband’s funeral pyre), and is unknowingly being chased by hapless detective Inspector Fix who thinks Fogg is s a bank robber (in a case of mistaken identity).

Just like travellers today, Fogg wants his passport stamped at all the ports to prove his been there. Interestingly when he disembarks at Bombay Port he is told “No passport is required” as India is part of the British Empire! “One hundred and eight million souls all under British rule”, says Fogg while Mr Naidu reminds him “a portion is still free”, (alluding to the princely states).

The play is very prescient about Britain and its relationship to Empire whilst at the same time being very aware of the present. There is a map projected above the stage which gives us an idea of the journey travelled by Fogg and his companions and the ticking clock. It is really good fun, a bit silly and entertaining all at the same time.

Chani who was born and brought up in Birmingham really enjoyed drama at school and his drama teacher recognised that and asked him to audition for Central TV (Now Carlton, an arm of ITV), Youth Theatre.

He enjoyed it very much, but being a good Asian boy went on to study an IT degree at the University of Central England (Birmingham City University).

However the lure of treading the boards proved too much and he later went to drama school and began his professional career doing theatre in education (TIE) work.

Since then he has worked extensively in radio, television and theatre where his credits include the Bollywood musical, ‘Fourteen Songs, Two Weddings and a Funeral’ (on tour with Tamasha 2001), ‘Midnight’s Children’ with the Royal Shakespeare Company, and many others with Kali Theatre.

He is soon to be seen in ‘The Boy with the Top Knot’ and an independent horror action feature, ‘Polterheist’.

For dates and times of tour see http://www.80dayslive.com/tickets-and-tour/