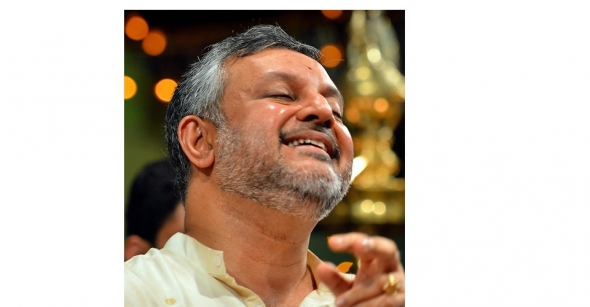 South Indian musical icon to talk about his art and playing…

HE is regarded as one of the finest exponents of Carnatic music, not just as a musician but as an educator and a repository of immense knowledge.

That he is descended from a royal family and one too that has a very rich artistic heritage only serves to bolster his very considerable reputation.

Prince Rama Varma, 45, is a member of the royal family of Travencore (now Kerala) and a descendant of painter Raja Ravi Varma, one of India’s finest, and can trace his lineage back to Maharajah Swathi Thirunal Rama Varma, one of the most enlightened and learned of Maharajahs to preside over a kingdom. The nineteenth century ruler composed music, wrote books, created the first schools for both boys and girls and patronised the arts, leaving a considerable legacy.

Prince Varma is both a noted vocalist and an outstanding musician on the Veena and has performed all over the world. For people in the UK, there’s a rare opportunity to hear him talk about Carnatic music and play at the Purcell Room at the South Bank Centre on April 25. It’s a concert organised by Dhruv Arts. For ticket information, please the bottom of the piece.

Srikanth Sharma spoke briefly to the Prince of Travencore, Rama Verma about his forthcoming concert in London for www.asianculturevulture.com

Srikanth Sharma (SS): You’re coming back to London after many a year – can you please share some prior memories for us…

Prince Rama Varma (PRV):Some of the most beautiful memories in my life are set in London. From wandering around in Kew Gardens, Holland Park and Isabella Plantation to wandering around Wimbledon hoping to run into Martina Navratilova or Mansour Bahrami (French/Iranian tennis star), to sampling various kinds of world cuisine, to discovering amazing talents such as Bill Bailey, Stephen Fry and Rowan Atkinson. The way London has enriched my life is immeasurable and multidimensional.

SS: You sold out the Purcell Room at the South Bank Centre back then…

PRV:Yes, my most special of these memories are set in the South Bank Centre, where I have attended numerous unforgettable concerts by sublime artists like Evelyn Glennie. My first CD was released at Queen Elizabeth Hall way back in 1998.

SS: How do you feel about being back in London, for this one off show on April 25th?

PRV: These days my teaching work keeps me mostly in India and I don’t get to travel abroad much. So it is with a great feeling of joy and nostalgia that I look forward to performing at the Purcell Room this April, after a gap of more than 15 years! Thanks for Dhruv Arts for inviting me to perform at this prestigious venue.

Jyotsna Srikanth
Jyotsna Srikanth (Carnatic Violin): Dr Jyotsna Srikanth is one of the most sought after South Indian violinists in Europe and is a composer known for her versatility and ability to collaborate with different genres. She is intensely rooted in south Indian classical music alongside exploring lush ground in the crossover between Indian music and a variety of contemporary flavours.
Her violin playing has a blend of ‘bhava’ [musical expression and emotion] & fingering technique, a result of three ‘decades of experimentation’ as described by one critic. Having played violin for more than 200 Indian films, she is now currently working on numerous large scale music experiments – in a way bringing communities together. She is the Artistic Director of the London International Arts Festival (www.liaf.co.uk) and Dhruv Arts (www.dhruvarts.org), UK and has been raising money for many charities through music. *Previously about Jyotsna Srikanth on www.asianculturevulture.com
More here www.indianviolin.eu

M Balachandar
M Balachandar(mridangam: two sided drum): A professional mridangist from the age of 15, he followed in his father’s footsteps, becoming a favoured accompanist for both musicians and dancers. He has trained students in India to professional level. He is the resident mridangam teacher at the Bharatiya Vidya Bhavan in London, UK. He is much admired and respected for his humility, professionalism, supportive nature, attention to detail and deep knowledge of dance and music and his ability to perform with other musicians.

RN Prakash
RN Prakash (Khanjira – one sided drum) and RR Prathap (ghatam – clay pot):Popularly known as the Ghatam Brothers, they are versatile artists from Bangalore, and specialise in South Indian percussion instruments. The brothers have regularly performed for many prestigious organisations and venues and for radio and television.

Jyotsna Srikanth told www.asianculturevulture.com about the reasons for setting up Dhruv Arts and why it is looking increasingly towards staging concerts in central London.

She said: “We are lucky to get an opening at the South Bank Centre and hence decided to showcase the Prince Rama Varma who is a very authentic Carnatic musician with excellent oratory skills. Hope this event marks Dhruv Art’s into the Central London territory.

“We started Dhruv Arts to showcase the very best of South Indian Carnatic music and we have now expanded our vision to cover a far richer tapestry of music and arts. Our annual London International Arts Festival (LIAF) is full of fantastic award-winning artists, musical legends and emerging talent from both the Carnatic Music and world music sectors.

“We base our selection on quality not popularity, and look forward to people of all ages and backgrounds to come and enjoy. We live in East London and have been showcasing talents in the East London. Now we want to expand our activities to central London and showcase the less known Carnatic music to the central London audiences.”