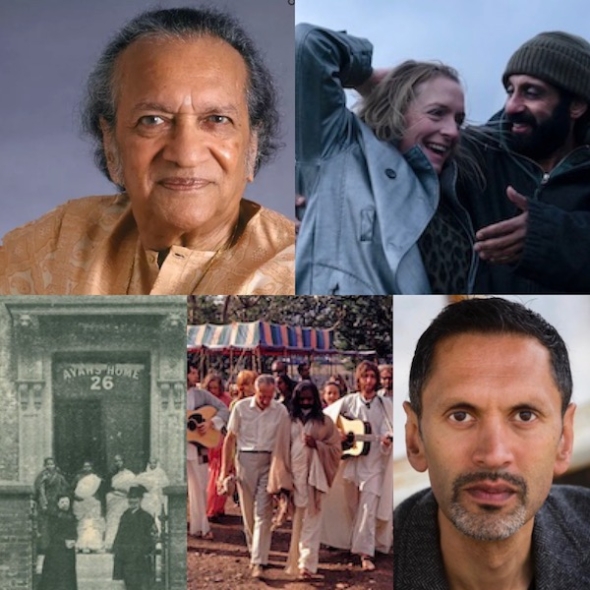 DEDICATED to the musician known as ‘the godfather of world music’, and after two years of delays, the ‘Ravi Shankar Centenary’ concert will take place on Saturday (March 5) at the Southbank centre to celebrate 100 years since the musician’s birth. A headline concert will be led by his daughters Anoushka Shankar and Norah Jones. Among the other performers are Nitin Sawhney and 100 dancers from the Sujata Banerjee Dance Company. As well as the concert, there will be multiple free public events exploring Shankar’s music, life and legacy, including an exhibition called ‘Indian Sun: Highlights from the Ravi Shankar Archive’, open from March 4 – May 15. The exhibition will feature rare archive pieces curated by Shankar’s biographer Oliver Craske, as well as film footage and a paper flower installation created during the Southbank’s ‘Imagine Children’s Festival’. Sujata Banerjee Dance Company will be running a dance workshop in memory of Shankar, ‘Dance to Celebrate’, on Saturday (March 5), to honour the beginning of his career as a dancer. The class will be based on Indian folk and Kathak dance movement led by Banerjee herself, and no dancing experience is necessary.

To officially end this section of Shankar 100, there will be four performances of Akram Khan’s celebrated production of ‘Kaash‘ between 20-23 April. Inspired by Hindu Gods, black holes in space, Indian time cycles and creation and destruction, Khan presents a dynamic and changing world. The name of the performance, ‘Kaash’, is Hindi for ‘if only’ and was Khan’s mantra for building bridges between contemporary dance and the Indian classical dance, Kathak.

Speaking of the concert and her husband, Sukanya Shankar said: “My husband’s music continues to bring magic to people around the globe. As the whole world faces these challenging times, it’s more important than ever to celebrate our common humanity with art that transcends boundaries.”

Shankar was the world’s best-known performer of Indian classical music, and his friendship with lead guitarist of The Beatles, George Harrison, helped introduce Indian music to the west. He influenced musicians such as jazz saxophonist John Coltrane, and composer Philip Glass. He toured Britain many times and has played at the Royal Festival Hall in the Southbank Centre – he also performed with Anoushka. He passed away in California, aged 92 in December 2012.

Set in Bradford, Akhtar plays easy going Ali, who strikes up a romance with widow and teaching assistant Ava (Rushbrook). Ellora Torchia plays master’s student Runa, Ali’s soon to be ex-wife with whom he still lives under the same roof.

Speaking to www.asianculturevulture.com at the film’s UK premiere at London Film Festival, Akhtar said: “There were parts of Ali’s character that were obvious and it’s only through interactions with other characters that you feel there was stuff under the surface, which was unexpected. There was more to him than you first thought”.

ONE OF THE most contentious parts of history will be the subject of a new play that is coming to the National Theatre, ‘The Father and the Assassin’ by Anupama Chandrasekhar explores the murder of Mahatma Gandhi by assassin Nathuram Godse in 1948.

Directed by Indu Rubasingham, it will feature Paul Bazely as Gandhi and Shubham Saraf as Godse, as well as Ayesha Darker and Irvine Iqbal, who will play Jinnah, the prime minister of Pakistan. The drama follows 30 years of Godse’s life during India’s fight for independence, from his worship of Gandhi, his then radicalisation and finally his assassination of one of the key figures of Indian Independence. In recent times, some Hindu nationalists have started to view Godse in a more sympathatic light.

MARKING the actual date of the visit of The Beatles to Rishikesh and the remote Himalayan ashram run by the Maharishi Yogi in 1968, the UK Asian Film Festival is hosting a screening of the film, ‘The Beatles and India’ at the BFI Southbank next week (on March 10).

The love affair between The Beatles and India will be shown in rare archived footage, photographs and eye witness accounts, with an introduction by co-director Pete Compton and producer Reynold D’Silva. Ultimately, their experiences inspired creative songwriting and helped India to build bridges with western culture, the film posits.

There are a few upcoming call outs for this year’s 24th festival which will be in May. UAFF is looking for volunteers, whilst the festival is also looking for two British digital artists to come up with creations that reflect a British-Pakistani identity. Commissioned by the British Council, the upcoming exhibition is a chance for two artists to showcase their work, based around the theme Re-Imagining Freedom.

Filmmakers are also being invited to submit their films for this year’s official festival, with the theme Dare to Dream and sub themes of: 75 years of India and Pakistan’s Independence, human resilience before, during, and after COVID-19 pandemic and climate change and its impact.

English Heritage to honour building known as ‘The Ayah’s Home’…

A BLUE plaque on a grand building in Hackney, east London will recognise the pain and destitution of Indian Ayahs in the late 19th and early 20th century.

These were maids and other personal assistants who accompanied British families from the Raj back to Britain and were either abandoned or treated very badly. Some were promised passage back to India but then left to fend for themselves. The building became a refuge for these Ayahs after a campaign initiated by Liberal Party MP Dadabhai Naoroji, MP for Finsbury Central, between 1892-95.

Named ‘The Ayah’s Home’, the building dates to between 1900-1921, and was a safe space for these Indian women who could live with dignity and not beg or end up in workhouses.

The Blue Plaque scheme is run by the English Heritage and honours significant historical buildings around London. English Heritage aims to celebrate women’s experiences in London in the 2022 cohort, with British Indian spy Noor Inayat Khan’s home another to be recently honoured.

In the 1900s Ayahs – or nannies – were hired by wealthy British families living in India to look after their children. Many of these women were older or widowed, so had experience raising young ones, and sometimes children would spend so much time with their ayahs they could speak their language.

Call out for artists and models…

SOUTH ASIAN women have been asked to take part in a festival by Coventry City of Culture called ‘Unapologetic’, which will take place from April 23 to May 13, and will be split into two parts: ‘Joy’ and ‘Nungi’.

‘Joy’ will showcase the work of eight female visual artists, and the themes of the exhibition are: Power, Beauty and Joy. Those artists who are eligible (they must live within a CV postcode), are asked to submit information on one of their existing pieces, or a proposal for a new piece based on those themes.

Part two- ‘Nungi’- will show one female photographer’s work, with 12 sitters and with the same themes. The call out is for women over 18, with a willingness to model part naked or baring flesh.

The call outs will be open until Sunday (March 4), and more information and eligibility can be found here: https://coventry2021.co.uk/get-involved/jobs-tenders-and-call-outs/