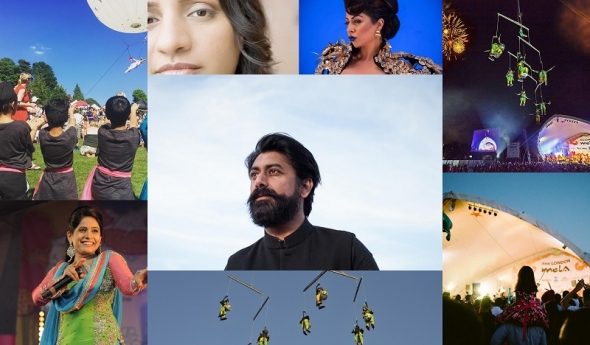 Regarded as Europe’s biggest South Asian themed gathering, the fests head back to its first home…

ONE OF THE CULTURAL highlights of London is the London Mela – which marks its 15th year of showcasing South Asian culture on Sunday (September 3).

The mela returns to its original home of Gunnersbury Park, in Ealing and is free (in 2015 it there was a charge, while in 2016 it was free but at Wembley Park).

Among the headline acts due to perform are musician, tabla player, Mercury Prize winner, artist, Talvin Singh, who will be curating the Anokha stage, creating the iconic club he used to run 20 years after his Anokha Soundz of the Asian Underground album.

DJ Rekha and Asian Dub Foundation will also be on the Anokha stage and along with ADF seeing out the festival on the main stage, will nine clowns dangling from cranes as part of the French Mobille Home Transe Express act and the Dhol Academy.

This year’s theme is ‘Love, love will conquer hate’.

There will also be huge array of food stalls with ‘The Taste of Asia’ and there will be shopping too.

He said Remarkable had also created two new events, Croydon International Mela on September 30 and and also Festival of Fire and Light at Wembley Park which will be October 28, and all these will be free to the public.

One of the key sponsors of the event is Zee TV, the lndian media company and the Mela is officially called, Zee London Mela.

Neeraj Dhingra, CEO Europe, explained that food, music and entertainment were really a great way of bringing communities together.

“We are really honoured to be partnering for the third year in a row and it’s an opportunity to connect thousands of our viewers to London.”

Sadiq Khan, Mayor of London, was not able to attend the launch but he was represented by his deputy, Gemma McCarthy.

He later posted a message highlighting the importance of this “wonderful family event”, that “showcases the fantastic diversity of Asian arts and culture in the capital, and invites Londoners from all backgrounds to come together and get involved”.

The London Mela is a great way of showcasing “London at its diverse, lively and open best, he remarked.
Ajay Chhabra the artistic director of the Mela explained that arts and culture was the glue of the city, and at difficult times it was even more important to be united.

“Mela means to meet, to come together, it means to welcome, it means to mingle, and we really need that in the moment that our city is living in.”

He went on to thank everyone who had joined Rudd and himself on a 15- year journey and stressed the important of creativity and culture.

The other events scheduled to take place are the Zee Main Stage in association with Sunrise Radio; the Outdoor Arts stage, BBC Asian Network stage and the Love to Dance stage headed by the indomitable, choreographer, teacher, Jay Kumar.

There is also a pre-mela symposium marking twenty years of Asian Underground Music. See link below