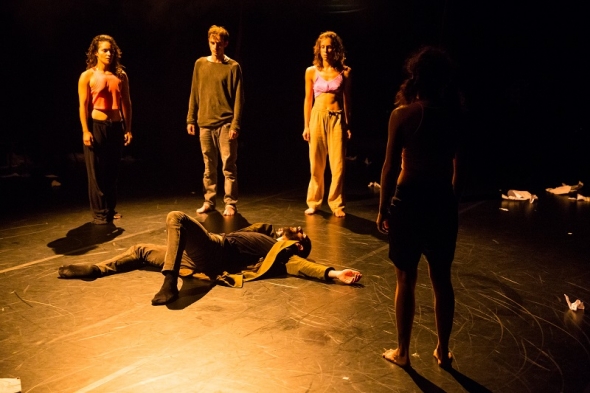 Aakash Odedra’s reputation has been steadily rising and he is already a much-feted figure on the continent – and this piece still a work in progress wowed the Edinburgh Fringe just last week, winning a prize…

IT IS HARD to let this dance piece just go from your mind.

The audience was quite diverse and there appeared to be an intensity about the studio space which was not quite what I was prepared for, and it became even more apparent why I felt like this when I saw the stage setting.

The stark, simplistic low lights and dark clothing worn by the dancers created an eerie atmosphere and the tableaux provided images of a bygone era.

I felt as if we were transported to the 1930s or the time of the Second World War. The reasoning for this became more apparent as the dance moved on.

The dancers, from the Aakash Odedra Company (AOC), depicted individuals who were isolated, frustrated, agitated and lost in themselves, constantly being watched, monitored and addressed by someone known as ‘The Oppressor’.

Using the hashtag # in its title to demonstrate how priorities are forever changing on a global scale, and how we are affected by these nuances to the point societal changes are made, either in a positive or negative way, the parallels of the individual stories set against the backdrop of US President Donald Trump’s voice on an old transistor style radio highlighted the rise of fascism and dictatorship in an otherwise modern world.

There is a scene in which the female dancers are wrapped in cling film from head to toe by the male counterparts as they try to make a stand or themselves, fighting for their voices to be heard as “It’s our right and nobody can take it away from us”.

With a tall, male dancer dressed in militia uniform who was known as ‘The Oppressor’ watching their every move and coercing them to conform, the project explored universal themes of oppression within our society today.

Having watched this production, I can see why they were awarded the Amnesty International Award for Freedom of Expression in Edinburgh.

The intensity and emotion of the dancers was clear to see and the empathy built up through the choreography for each character was immense.

For those who work with asylum seekers and refugees, it touched a nerve and the passion of the piece was highlighted when the four women disrobed, to reveal colourful outfits and danced together as a quartet to demonstrate their strength of character and the desire to be who they want to be and what they wanted.

The programme stated the production is “inspired by personal stories of conflict, media manipulation, displacement and identity” and “it is the first ensemble project of AOC to pay tribute to the notion that life matters in every corner of the world”.

And in doing so, it certainly provided a shockingly brutal yet honest portrayal of lives of people lost, fighting for survival on all accounts on a regular basis and those who are otherwise forgotten.

But after watching this project, I know I won’t forget it for a long time.

Aakash Odedra presented ‘#JeSuis’, a dance production in progress at The Curve Theatre in Leicester. Supported by Journeys Festival International Visual Arts for The Integration of Refugees.

The piece, still a work in progress, can be next seen…

Privacy & Cookies: This site uses cookies. By continuing to use this website, you agree to their use.
To find out more, including how to control cookies, see here: Cookie Policy
← Humble The Poet – from down and out to social media global spoken word star… (Bagri Foundation Asia House Festival of Literature closing event)
Sanya Malhotra (video) – on ‘Dangal’, ‘Photograph’ and breaking through into Bollywood (update) →