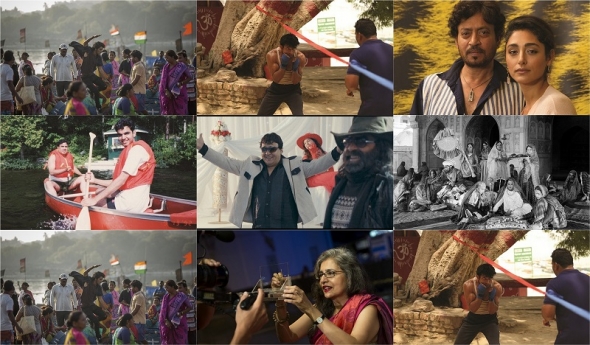 THERE are nine features with a strong South Asian angle to them in this year’s London Film Festival selection.

The selection of nearly 300 films – with some 29 world premieres was unveiled at special launch event in Leicester Square, this morning.

Amanda Nevill, chief executive of the British Film Institute (BFI) which organises the festival and Clare Stewart, BFI festival director, welcomed the press and other invited guests to the launch event.

While the opening and closing films and many special presentation films have already been disclosed, the full programme was released today and Stewart revealed what films were appearing in what sections.

The festival is split into themed categories such as – Love, Debate, Dare, Laugh, Thrill, and several other categories. Films appearing in competition were also revealed and one is from India.

Stewart also drew attention to ‘Shiraz: A Romance of India’ – this is a digitally restored silent film from 1920 and it is LFF’s Archive Gala. The audience saw the trailer but crucially there was no sound. Renowned sitar player Anoushka Shankar is writing a score and a live orchestra at The Barbican will perform it on October 14. Stewart said Shankar is still working on her composition and this commission was first revealed as part of the UK India Year of Culture initiatives back in February.

The Indian film in the Competition section is ‘Beyond the Clouds’. Set in Mumbai, it is up against ‘120 BPM’ which caused a the stir in Cannes earlier this year and was among ACV’s picks.

‘Beyond the Clouds’ is directed by Iranian Majid Majidi who has been nominated for an Oscar (for ‘Children of Heaven’) and features newcomer Ishaan Khattar in the lead role.

AR Rahman provides the score for a movie which some are claiming surpasses breakout indie stunner ‘Slumdog Millionaire’ for its gritty depictions of life on the margins of India’s most vibrant metropolis.

Also believed to be making a first of sorts is Anurag Kashyap. Widely regarded as India’s answer to Quentin Tarantino, his features routinely premiere in Cannes but for the first time, his latest film comes to LFF first.

‘The Brawler’ (‘Mukkabaaz’) is a study of masculinity and charts the progress of boxer ‘Sharavan’ (Vineet Kumar). Talented but headstrong, his problems multiply as he romances the boxing chief’s daughter ‘Sunaina’ (Zoya Hussain). Kashyap’s films are not for the feint-hearted. ‘The Brawler’ features in LFF’s Thrill section.

Anup Singh’s last film ‘Qissa’ was a powerful meditation on gender and family expectations, and he makes his LFF debut now with ‘The Song of the Scorpions’ – teaming up again with lead and globally recognised star – Irffan Khan.
Set in the wild dessert reaches of Rajasthan – Khan’s character falls for a woman of mystery and intrigue ‘Nooran’ – played by famous Iranian actress Golshifteh Farahani). The iconic Waheeda Rahman has an eye-catching cameo in this film which appears in the Debate section of the fest.

Another film in this section is ‘Azmaish: A Journey Through the Subcontinent’. Filmmaker Sabiha Sumar, enlists rising acting star Kalki Koechlin, for a two-hander documentary film, which looks at what it means to be Pakistani or Indian, respectively, and asks can the people in both countries if they can ever overcome the political divide in an increasingly fractured world. Readers of acv will recognise this title as it was the subject of the Closing Gala of the London Asian Film Festival (LAFF) in March. Sumar spoke to acv before a special Q&A at BAFTA and there was a video link up with Koechlin as she could travel due to illness.

For those looking for stories perhaps a bit closer to home, not just in geography, but sense and sensibility, then ‘Abu’ should be your ticket. Another documentary – but set in Canada and Pakistan, it features in the Journey section of the fest and chronicles the relationship of a father and son. Arshad Khan and his family moved from Islamabad to Toronto in the 1980s; Arshad pulls the feel of the West culturally, while his father – Abu – goes almost the opposite way. Their relationship starts to fissure at the edges and becomes yet more profound as Arshad begins to grapple with his sexual identity.

‘The Hungry’ featuring Naseeruddin Shah is something avid ACV readers will have already come across. A UK-India collaboration, its producer Deborah Sathe and UK lead Antonio Aakeel featured in a guru industry panel talk at this summer’s London Indian Film Festival. An adaptation of Shakespeare’s ‘Titus Andronicus’ but set in contemporary Delhi, it’s not a film for those of a delicate disposition and unsurprisingly such is its raw and visceral feel, it appears in the Dare category.

Appearing in the documentary competition section is ‘The Prince of Nothingwood’ which looks at the life of ‘Shaheen’ – an unlikely film star in Afghanistan. Radio journalist Sonia Kronlund has been covering the country for 20 years but had never come across a story like this before. Shaheen is a larger than life character and has a devoted following, despite few theatres to show his films and the ever constant threat of the Taliban.

Nitin Sawnhey appears at an LFF connects – this is where artists working in media connected to film talk about their craft. Polymath Sawhney has composed the score for this year’s LFF Opening Night Gala film, ‘Breathe’ and is currently working with that film’s director Andy Serkis on the forthcoming ‘Jungle Book’. Serkis is making his directorial debut with ‘Breathe’ starring Andrew Garfield. Serkis is best known for playing ‘Gollum’ in ‘Lord of The Rings’. The Closing Night Gala Film is ‘Three Billboards outside Ebbing, Missouri’ starring Frances McDormand.

Described as an underground cult hit and now fully restored is ‘Om Dar-B-Dar’ (1988). Appearing in the Treasures sub-section of Experimenta, programmer Shai Heradia says: ‘Om Dar-B-Dar’ mashes philosophy, popular culture, politics and mythology into a maddening cinematic work that has been referred to as the great Indian LSD trip.” Directed by Kamal Swaroop, and it is produced by the National Film Development Corporation of India.