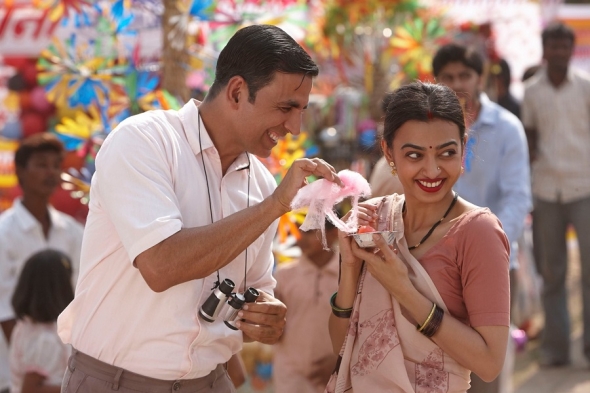 Is it the most feminist film Bollywood has ever made? We review the unlikely ‘chick flick’ that will strike a chord with every woman (and a few men too ) on the planet…

DON’T BE fooled by the title of this review. Pad Man (Directed by R Balki) though a film about women’s empowerment, isn’t just one a female audience will enjoy: this is a movie that will inspire men and the masses in India, and beyond.

With releases taking place across the world in countries including Iraq, Ivory Coast and Russia, it could be the biggest crossover movie the industry has ever witnessed. Its universal message deserves that accolade.

While it’s very much a female-centric film, the star of it is a man, referred to in the trailer as an Indian Superhero: Padman. But we’re not talking the lycra-clad variety, this is one step ahead; a man who is so devoted to his wife, he will do anything for her, even if that means being the subject of ridicule and being booted out of his home.

The biopic of Arunachalam Muruganantham, – ‘Padman’ is the tale of a villager from Tamil Nadu, South India who after discovering his wife uses dirty rags when she is menstruating, sets out on a mission to make her homemade sanitary towels.

The concept has a joyful humour to it and the script is brimming with light-hearted comical moments, yet while watching it, the movie at times becomes overwhelming to think that these scenarios actually happened and are still happening today.

‘Lakshmi’ (Akshay Kumar) is as much a symbol of how to be the world’s greatest husband as he is a figure raising awareness of social issues. DIY is in his blood and like the Indian version of Wallace, the popular British animated character, only without his dog Gromit, we see him craft impressive inventions to deal with every day predicaments like making an onion slicer to prevent his wife from crying while she’s cooking, to building a bicycle seat for her so she doesn’t feel uncomfortable sitting side saddle.

When he attempts to make her a pad using cotton wool and muslin on the other hand, it becomes one fail after another and the process ‘shames’ his wife so much that she leaves him; and thus begins his journey to help not just her, but every women across the globe, ensuring they all have access to adequate low cost sanitary products.

Watching Lakshmi trying to figure out how to make pads with such openness is one of the movie’s most impressive aspects.

When he first picks up a shop bought towel and pulls it apart to examine its construction, one realises this is possibly the first time a sanitary towel has ever been shown in such detail, not just on the big screen, but in television advertising, where you may catch a glimpse of a towel but you’ll never see what’s inside it.

Every attempt we witness is fascinating and there’s a real sense of satisfaction in the pleasure of watching him make it with his hands.

But the creativity doesn’t stop with the production of just one pad, Lakshmi goes the whole hog, inventing a machine that manufactures low-cost sanitary towels resulting in a social enterprise for women all over India, where they are at the heart of production, selling and marketing, taking ownership of their ‘women’s business.’

Heartwarming and earnest, ‘Pad Man’ though has a social conscience at its core, but maintains all the key elements of an archetypal Bollywood family melodrama.

It scores highly on the entertainment factor with a good dose of tension and romance.

Akshay plays the role of Lakshmi with sincerity and sensitivity and in the scene where he attempts to test out his product himself, his dedication to the cause is so admirable that it will go down as one of the most memorable moments of his 20+ year acting career. The scenes with his wife Gayatri (Radhika Apte) too make for compelling viewing.

Where the film lets itself down is when it tries to be conventional; add in an attractive Bollywood actress to give it some sex appeal.

Yet Sonam Kapoor’s character, a Delhi rich kid who in this version of events becomes Laxshmi’s sidekick, playing a major role in his achievements, detracts from this being his story.

At times she is patronising and annoying, her story isn’t of interest and yet she accrues more screen time than Radhika who is far more likeable to watch. When there are suggestions of a potential romance between her and Lakshmi it weakens both the plot and Lakshmi’s devotion to his wife.

Yet put that aside, along with two slightly-over-the-top speeches and ‘Pad Man’ is a film that is undeniably feminist while being undeniably fun to watch.

A celebration of what can be achieved when you dedicate your life to a cause, it’s a reminder that one person can make a difference and is proof that you should never give up on fighting for what is right.

You will have no regrets in watching this film which makes for perfect Valentine’s viewing, whether you have a date or not.

Privacy & Cookies: This site uses cookies. By continuing to use this website, you agree to their use.
To find out more, including how to control cookies, see here: Cookie Policy
← ‘Indigo Soul’ – first songs from debut album to be unveiled at famous jazz venue for classically-trained vocalist Unnati Dasgutpa
‘Parey Love Hut’ – Two stars: Sheheryar Munawar and Maya Ali talk about dreams, making it and what they want in their next film… →