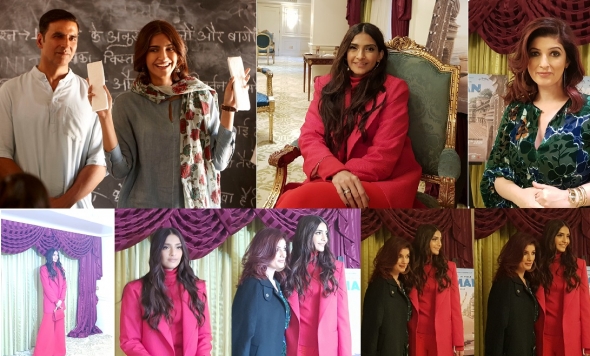 WILL the latest Bollywood film, ‘Pad Man’ out today (February 9) bring about the changes its makers so want?

The release of the film ‘Pad Man’ today (February 9) is eagerly anticipated, not just in India but in many other parts of the world where the film has been sold for distribution.

Despite being privileged and wealthy, producer Twinkle Khanna and star actor Sonam Kapoor want to strike a common cause with women everywhere, and those whose lives are very removed from their own.

Do they succeed and has the mass Indian film industry turned a significant corner with ‘Pad Man’ and is it showing a new respect for women?

It’s essentially the story of Arunachalam Muruganantham, who invented a low cost sanitary pad and became a national hero for doing so – but the odds were very much against him.

He himself is most certainly not part of the elite who usually wring the changes in India – a Tamilian, who lived outside a metro and studied at a non-English medium language teaching school, he has become a totemic figure among those who want to challenge the status quo and bring about change, informed by progressive values.

His story and persona are part of a wider narrative about the need for change and how India gets there.

You can watch this film simply on its own terms and appreciate it as a film and that perhaps is the only duty a filmmaker has to their audience – but for both Twinkle and Sonam, there is something more.

This isn’t just about famous writer and first time producer Twinkle Khanna (and one-time Bollywood starlet herself and daughter of Bollywood star the late Rajesh Khanna) or her Bollywood megastar husband Akshay Kumar, who reprises the Muruganantham role or the iconic (as a an example of a modern Indian woman) Sonam Kapoor in one of the supporting parts to ‘Pad Man’.

It’s deeper and more meaningful, all round. In some ways, this is more than just a Bollywood film and whether you want to think about it on those terms or not, is entirely up to you – but when we talked to Twinkle and Sonam, it’s clear this is a film they will remember making for reasons above the usual money or career considerations.

Twinkle told www.asianculturevulture.com in London: “I don’t think Hollywood has made a movie about menstruation.

“I haven’t even seen a film where there are even sanitary pads (mentioned or shown) – it’s almost like it doesn’t exist.”

Sonam didn’t quite agree it is a movement behind the film, but things are a stirring, she felt too.

“It should be,” she said to acv when the two came to London on the publicity trail for the film last month. “I think it should start a wave that should go and change the way society thinks and it is just the beginning.”

For both personalities, Bollywood is at the vanguard or at least a reflection and expression of something that is going on – women want to be heard and are not going to be ignored, pushed down or taken for granted, any more.

Khanna said that Bollywood has realised churning out the same ol’, same ol’ can only take you and the country so far.

“Now that Bollywood films are releasing at the same time as Hollywood ones, we’ve realised we can’t compete with their budgets or all the sex that they have, so we have to find compelling stories.”

It’s a hark back to a different era, she believes, when Bollywood had a more independent streak.

She said: “If you look back at the 1960s and 1970s, there were films that were really talking about social issues and sometimes it takes a wrong turn (to get back on track) and the minute I wanted to do this story, everybody was on board.”

A lot in is in perception and the way people are raised, she believes and for a while she admitted to being slightly insulated (or protected) from sexist thinking and values.

“I can only talk personally,” she said about women changing the narrative which has been destructive. “I grew up in a very progressive household with my single mom and she raised me in a way that I believed for the longest time that equality was not an issue.

“I didn’t realise it was a problem for other women till I was in my 30s because I say my mother and aunt all living life on their own terms and they had their own visions of what marriage meant and what gender equality was.”

Sonam’s character is someone who supports Muruganantham and is a progressive and modern Indian young woman.

“She has a premonition about the greatness of this man and supports him.

“It’s an intuition and I think most women have this and I don’t think without this intuition progress is possible.”
When talking about menstruation, she is unequivocal.

“A woman’s problem shouldn’t necessarily be behind closed doors and having a period is not anything you should be ashamed of; if you didn’t get your period, you wouldn’t exist – nobody in the world would.

“It’s something you should be proud of, and something your body can do, and your body is fascinating, and it’s amazing and it’s something a man can’t do, and that might mean we are a little bit superior to a man,” she said, perhaps slightly tongue-in-cheek.
“We still have a very patriarchal society – very chauvinistic.

“We have a conditioning that makes us believe that we are not as good as men, and that we belong in the house and the kitchen – and hopefully, slowly, the dialogue starts and we start thinking a bit differently,” she argued.

Twinkle believes an icon such as her husband being in a film like this dispels a lot of intrinsic negativity that comes with the subject.

“We definitely needed somebody India idolises (Akshay Kumar) and if they see their idol holding a sanitary pad in their hand, then half my taboos are immediately dismissed.”

While Twinkle is focused on ‘Pad Man’, she told acv she has given some thought to the future.

“Something that deals with ageism and relationships that are frowned upon because you are a certain age.”

As for Sonam, the all-female star cast of ‘Veere di wedding’ has a June 1 release date and might disrupt her annual appearance at the Cannes Film Festival (May 8-19) as a L’Oreal Paris ambassador.

“We’ll see, I haven’t made any firm decisions as yet (about attending Cannes),” Sonam told www.asianculturevulture.com

Now, what is the film like? Read Momtaz Begum-Hossain’s review here NOW

*NB: ‘Pad Man’ was originally scheduled to release on January 25 – on the same day as ‘Padmaavat’ (which remains efectively banned in some Indian states because of a row over representation) but was later set back to today…