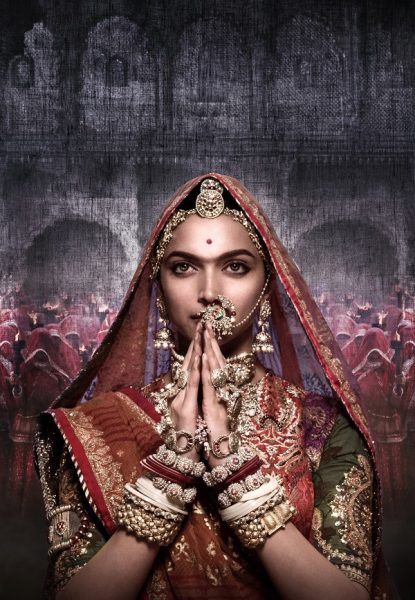 Film has aroused strong passions in India, sparking strife and vandalism in some parts – but has been something the director first unveiled in a different format in Paris some years ago…

LET’S get this over with – yes, we have seen Padmaavat and it is a typical Sanjay Leela Bhansali film; it looks spectacular, with beautiful set and costumes, fine performances from the cast, perhaps not enough music for some but the Rajputs are valorised, so it’s difficult to understand the recent drama surrounding its release. Some Rajput groups have protested at their depiction.

Briefly – set in the 13th century it’s the tale of Alauddin Khilji, an ambitious upstart from Afghanistan who wants to possess everything from the Khyber to Mewar, learns of the beauty of the Queen Padmavati, wife of the Maharawal Ratan Singh and begins to covet her before he has even cast his eyes on her. He’s a man used to getting his own way and won’t stop at nothing till he has got what he wants.

Alauddin, superbly played by Ranveer Singh, is sometimes an uncouth animal who crushes his enemies (literally with his bear like grip), occasionally he appears more like a Rasputin like type figure and sometimes even as a bad love-sick poet.

The beautiful Princess Padmavati (Deepika Padukone) first makes her entrance on screen chasing a deer (but no animals were harmed in the making of this film), in the forest but mistakenly she fires an arrow into the chest of the noble Rajput king, Ratan Singh, and as soon as their eyes lock it’s love at first sight (and there are lots of deep staring at each other). The couple wed and go off to live in his stone built fortress in the desert.

Add to this mix is an evil Hindu priest, Raghav Chetan – who has been a good guru to Ratan Singh so far, but now finds himself smitten by the beauty of Padmavati – she’s like the face that launched a thousand ships (in this case, a few thousand foot soldiers) and breach the solid walls of Mewar (with apologies to Christopher Marlowe). Chetan has behaved like a peeping Tom and is banished, so takes refuge in the court of Khilji and the inevitable happens. (Sorry we don’t know this actor’s name).

Bhansali takes a long time to get into this story and along the way, we need to enjoy the opulence and beauty of the camerawork, lighting and stunning visual sequences. Of course none of this is true, as the Disclaimer Note on the opening tells us that the story is based on a poem by Malik Muhammed Jayasi (died in 15th century) “which is considered a work of fiction, the film does not claim historical authenticity or accuracy”.

It is however, populated with real characters such as Alauddin Khilji (who ruled from 1296 to 1316), and saw himself as the second Alexander (Sikander Sani) and was the nephew of Sultan Jalaluddin Khilji (played here by Raza Murad), whom he did dispense with in order to take over the throne and expand his empire. He also married his daughter called Mehrunissa in the film played by Aditi Rao Hydari.

Jalaluddin gives Alauddin a Mamluk slave, Malik Kafur (we don’t know if this is real) in a fine performance by Jim Sarbh and the relationship between master and slave has suggestions of homoerotic love.

The 13th century Sufi musician and poet, Amir Khusrow also makes an appearance and there are a couple of funny scenes between him and Alauddin. It’s peppered with messages about Rajput valour and principle, comparisons to the Ramayana around good and evil and with a ‘bed of arrows’ death scene that is totally ‘The Mahabharata’. Sadly, Alauddin Khilji possesses no such virtues, he is just grasping, ambitious and acquisitive – he has a favourite line about wanting to possess anything he finds beautiful.

Then there is the matter about ‘Jauhar’ (self immolation – where Queen Padmavati asks her husband’s permission to do the deed, should he fall in battle and then leading a group of women towards the fire, all intercut with the desperation of Alauddin to reach his desire. (There is a Disclaimer at the beginning which says the film ‘does not intend to encourage or support Sati’).

www.asianculturevulture.com really enjoyed the attention to detail and meticulous planning and sumptuous look. Special mention must be made of how handsome Shahid Kapoor looked in chainmail and other regalia. (I wish there was a book on Bhansali’s cinema).

I cannot help but feel that he was inspired to explore this story as a result of his invitation by Théâtre du Châtelet to direct the Orientalist opera-ballet Padmâvatî in March 2008, which caused a bit of a sensation, and I took a Euro-Star to Paris for the weekend to go see it.

The opera had first been performed in 1923 and this was going to be the second time. The music written by the French composer Albert Roussel and the libretto by Louis Laloy is drawn from the Malik poem but the stage performance has a slightly different storyline, where the Queen Padmavati refuses to surrender to the Sultan, but kills her husband and then immolates herself (spoiler, sorry).

It was very opulent, a la Bollywood style with a real tiger and elephant on stage, and lots of lavish costumes, singing and a troupe of Indian dancers. It later went to 51st Festival of the Two Worlds, Spoleto, Italy. You can catch a short piece about it on the link below…

But back to the film itself, Bhansali presents us with an exploration of love, obsession and war that looks spectacular and some fine performances.
**** (four stars).

Padmaavat is on worldwide release from today…