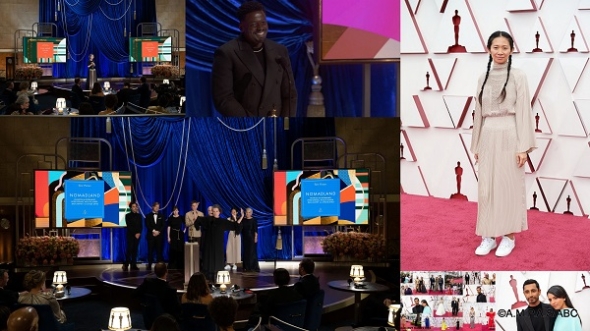 CHLOÉ ZHAO’S Oscar win for both Best Picture and Best Director could be a sign that Hollywood and the West is finally waking up to the huge reservoir of talent in different minority communities.

Zhao made history for becoming the first person of colour to win the coveted Directors’ Oscar and is only the second woman to win this accolade after Katheryn Bigelow’s win for ‘The Hurt Locker’ in 2010.

An offbeat low budget road movie (under £5million) with a 60-plus aged widow at the centre of it would have hardly have got many takers as traditional Oscars nomination fare – let alone winning the top prize.

Zhao’s character study of a woman living on the margins and in a camper van, and befriending others who have similarly called time on the American Dream or the conventional version of it, does suggest filmmakers and the professional community are moving closer to audiences, which have always responded to strong storytelling regardless of ethnicity or other less normally supposedly consumer-led considerations. ‘Black Panther‘ (2018) destroyed that argument garnering over a $1bn in ticket revenues and a recent report suggested that billions have been lost because some producers are blinkered in what they think will work commercially.

The Chinese-born, British-educated (fee-paying Brighton College as a teenager before studying in the US) filmmaker alluded to this in saying she always had an affinity with outsiders and that filmmakers should focus on stories to which they most keenly connect.

Zhao is next directing a $200m Marvel film, ‘Eternals’ featuring a slew of stars including Kumail Nanjiani (‘The Big Sick’) and that is expected to release in November and is also working on a modern, sci-fi version of the Dracula story for Universal Pictures. She has a British partner in Joshua James Richards who is also her cinematographer and was also nominated for his work on ‘Nomadland’. The couple worked together on Zhao’s previous film, The Riders’ (2017) about a rodeo who hits hard times – and like ‘Nomadland’ which is based on a non-fiction book, the older film is based on real people and has non professional actors in it too.

She also talked on the podium with her Oscar about the inherent goodness of people and encountering it wherever she went.

In the press room after the awards, she told www.asianculturevulture.com and others in response to the question about what the Oscar meant to her as a an Asian: “I think for all filmmakers we have to stay true to who we are, you know, and we have to tell the stories that we feel connected to.

“We shouldn’t feel like there is only certain type of story we have to tell.

“But it’s a way for us to connect with other people. That is why I love filmmaking.” (See our Twitter video below).

She praised Tyler Perry – who won an honorary Oscar – Jean Hersholt Humanitarian Award and made a powerful plea for people to listen to each other and not to hate.

Widely lauded, Perry who has made the phenomenally successful Medea Family series, called on people to reject hate and stand in the middle where people can meet and talk – eschewing the current trend to shout from one end of the spectrum to the other and not listen.

Equally powerful and memorable was Daniel Kaluuya for his acceptance speech.

The Camden-born actor embarrassed his mother who was in the audience at the BFI in London with Kaluuya’s sister, by referring to their parent’s rather obvious sex life – “My mum and Dad had sex, I’m here” he said, accepting his Oscar for his role as Black Panthers’ leader Fred Hampton in ‘Judas and the Black Messiah’. His mother’s reaction was caught on camera and she didn’t appear overly impressed.

Kaluuya reminded all from the stage that there was work to be done and that Hampton’s message remained potent, and relevant.

When asked about his mother’s reaction in the press room, he said he hadn’t checked his phone and that she “had a sense of humour”.

He said his historic win as the first British black winner in a Supporting Role meant Hampton’s story and ideals would travel far and wide.

“People will want to engage with the story and the film and the man”.

Also stealing hearts – again – after her memorable Baftas speech referring to British people as a bit snobby – was Korean grandma and undoubted rising star in Hollywood and beyond now, Yuh-Jung Youn – as referred to by the Academy of Motion Pictures, Arts & Sciences (AMPAS), but also referred by some media as Youn Yuh-jung.

Her role as the Korean matriarch of a family that comes to settle in the mid-west from Korea in the 1980s in ‘Minari’ has now been feted pretty much everywhere.

She was delighted to have received the Oscar from Brad Pitt, who is an executive producer on the film – and met for the first time on stage. There, she said that she could forgive all the people who had mispronounced her name.

In the press room, she was slightly bizarrely asked whether she had smelt Pitt – to which she said: “I am not a dog.”

She did have something more substantial to tell us when asked about introducing people to Asian stories and culture.

She said it’s, “just hearing different stories, I think it’s very nice to understand each other.

“And we should embrace each other… without being categorised ‑‑ these people are categorised like black, white, yellow, brown, something like that.

“That is not nice way to just divide like that, you know? I think if we put our colours together, (we can) make it more prettier, even rainbow has a seven colours.”

The much touted Chadwick Boseman lost out to Sir Anthony Hopkins for the Best Actor role.

The veteran actor, now 83, is the oldest to win such an Oscar and posted his reaction to Instagram only this morning.

He praised Boseman, saying the 43-year-old, who had come to prominence in ‘Black Panther’ and was nominated for his role in ‘Ma Rainey’s Black Bottom’, had gone far too early. (See below)

The ceremony this year was mostly from Grand Union railway station in Los Angeles with an improvised stage.

There was also British success with ‘Tenet’ for visual effects’ supervisor, Andrew Jackson who was part of a group of British nominees at the BFI Southbank, while fellow Brit Martin Desmond Roe who along with American Travon Free directed the Best Short Action Live film, ‘Two Distant Strangers’ which is about a black man’s unfortunate entanglement with a white police officer.

There were also further African American successes with Mia Neal and Jamika Wilson, getting the Oscar for Make-Up and Hairstyling alongside Sergio-Lopez Rivera for their part in Netflix’s ‘Ma Rainey’s Black Bottom’.

The team behind the song ‘Fight for you’ from ‘Judas and the Black Messiah’ took the award for Music – Original score. Pop star H.E.R (Gabriella Sarmiento Wilson), Dernst Emile II and Tiara Thomas collected this Oscar.

There was disappointment for Riz Ahmed on the evening but the film, Sound of Metal won in editing and sound categories. Ahmed told acv that while he is very proud of his achievement, real progress is measured by a community not individuals.

Another Brit of colour, who didn’t quite triumph on the night was Palestinian heritage writer-director Farah Nabulsi. Her short film, ‘The Present’ lost out to ‘Two Distant Strangers’. Earlier this month, she won a Bafta for 24-minute short set in Israel-Palestine.

The actual ceremony and live telecast shown on ABC in the US and Sky Cinema and Now TV and there is highlights show on Sky One this evening. It was co-produced by Oscar-winning director Steve Soderbergh (for ‘Traffic‘ in 2001) and the visuals were constructed to resemble a film and started with Regina King, actor and producing, introducing and credits rolling across the screen.

www.asianculturevulture.com Sailesh Ram talked about ACV coverage of this year’s Oscars with Sunny Grewal on the Sunny & Shay Show on BBC Radio London – listen from from 39 mins https://www.bbc.co.uk/sounds/play/p09d2r1b

For full list of winners of the Oscars 2021 – https://www.oscars.org/oscars/ceremonies/2021

In Sunday’s Oscars in the In Memoriam section, Bhanu Athaiya, India’s first ever Oscar winner in 1983, for her work as a costume designer on Sir Richard Attenborough’s epic, ‘Gandhi’ was recognised.
In November, ACV’S Suman Bhuchar spoke to actor Meeta Vasisht who worked with Athaiya. See here https://youtu.be/W-7EtYVTdrI
Also mentioned in this section of the 93rd Oscars were Irrfan Khan, Soumitra Chatterjee, Rishi Kapoor and Sushant Singh Rajput.
https://aframe.oscars.org/news/in-memoriam
Four others Indians also hold Oscars – Satyajit Ray has an Honorary one for Lifetime Achievement. Composer AR Rahman has two – one for the score of ‘Slumdog Millionaire’ and the other for the song, ‘Jai Ho’, co-written with Indian poet and lyricist Gulzar. Their colleague Resul Pookutty won for Best Sound Mixing, along with Ian Tappy and Richard Pyke, in 2009. The film also won the Best Sound Editing Oscar, which has been merged along with editing into just one Oscar now for Sound.