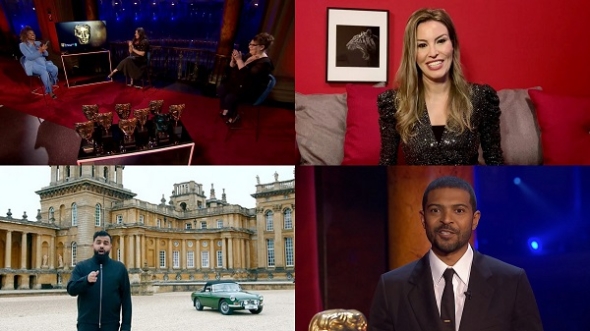 The main EE Bafta Film awards are being presented tonight, winners from last night and a review of the winning short film…

FILMMAKER and actor Noel Clarke accepted his outstanding British contribution to cinema Bafta award yesterday (April 10), saying he was collecting the accolade on behalf of all underrepresented groups and urged young black creatives to believe in themselves.

Eight awards were handed out last night as the Bafta Film awards were split into two sections, with the main awards ceremony taking place this evening (7pm BBC One) and technical and short film awards being presented yesterday. Both ceremonies are virtual and the presentations are filmed at the Royal Albert Hall. As part of the Bafta film awards programme last night, spoken word artist Hussain Manawar made a short film recognising the diversity of nominations in a pre-recorded section shot at Blenheim Palace. (See the video below)

A film about the daily misery of life in Palestine, ‘The Present’ won the Short Film Award and now heads to the Oscars with high hopes.

‘Sound of Metal‘ – the film in which Riz Ahmed is up for a Leading Actor Award tonight (see our nominations story), won for the Best Sound. About a heavy metal drummer, played by Ahmed whose character is losing his hearing, the film offers an immersive experience as it takes you inside Ruben’s head with an imaginative soundscaping.

The big winner last night was Netflix’s ‘Ma Rainey’s Black Bottom’ which won two awards for Costume Design and Make-up and Hair. (See the full list of winners below).

Clarke, an actor, writer and director who has his own successful recent and still evolving TV series, ‘Bulletproof’, has starred in BBC’s ‘Doctor Who’, and first came to prominence with the hard-hitting film, ‘Kidulthood’ (2006), and now has his own film & TV production company, said: “This is particularly for my young black boys and girls out there who never believed that this could happen to them.”

He also referred to the time when he won the Rising Star award in 2009 and went up the receive the award and undid his collar and bounced up off his seat.

He said he felt vindicated by the award and it was what motivated him to react in the way that he did – but many saw it as arrogance. Embarrassed by the criticism, he vowed to apologise when he got a similar platform.

Last night, he explained: “I’m not going to do that. Recently, I realised why I did it. I felt vindicated. I won something at the time that someone like me was never supposed to. Something that I had been told I couldn’t.”

While there is a lot of buzz around ‘Rocks’ which won big at the British Independent Film Awards earlier this year, there is growing global excitement about ‘The Present’.

Writer-director Farah Nabulsi won for her 24-minute film, ‘The Present’ which sees a father and daughter embark on a simple journey to get groceries and purchase a wedding anniversary gift – but are stifled and humiliated by Israeli soldiers manning a checkpoint.

Nabulsi dedicated her award to the Palestinian people – her film was shot on location and starts with shots from a real checkpoint and is shot in a documentary style at the start – but thereafter is a traditional creative narrative feature (see review below for more).

The British Palestinian thanked all the people who helped her to make the film and her family, reacting: “Wow. Wow.

“Amazing….For anyone who has seen ‘The Present’… you would know why I dedicate this award to the Palestinian people and for whom freedom and equality is long’ long overdue.”

In a discussion on Friday evening (April 9) with the Concordia Forum – an initiative which brings together prominent figures from a Muslim cultural background to discuss global issues – she told her fellow contributors that she and a crew created a checkpoint – and many Palestinians in the locality thought it was a real one. (See link below for the full discussion)

The film can be seen on Netflix and is up for an Oscar in the Short Film (Live Action) category on April 25/26.

‘Rocks’ is a captivating and absorbing drama about how a teenage girl has to fend for herself and her young brother when her mother suddenly disappears from their council estate London home. Centred around the character of ‘Rocks’ and played by Bukky Bakray (who is up for a Bafta tonight), it shows the girl leaning on a group of her schoolfriends for emotional and practical support. ACV saw the film at its world premiere at the Toronto International Film Festival (TIFF) in 2019. (See our review here)

Conrad Khan the star of feature ‘County Lines‘ is up for an EE Rising Star Award – which is voted for by the public and there is Indian interest this year in Adarsh Gourav who stars in ‘The White Tiger‘. (Watch our interview with Gourav here).

The Present (Review)
BEAUTIFULLY composed and acted ‘The Present’ is well worth your time. Don’t be put off by the politics – just come to this film as you would any other.
Yusef (Saleh Bakri) and his young daughter, Yasmine (Mariam Kanj) have a wedding anniversary gift to collect. This is before any covid lockdown but in a way, families living in Palestine, controlled by Israeli forces, have always been in a form of lockdown.
Nabulsi’s talent is to wrap the simple act of purchasing the gift and other groceries in a very relatable drama – for most people, this is not anything to make a film about – but put them in this context and suddenly the issues and the politics are unavoidable – at least until you finish watching. This is a film that says a lot in a short space of time and deserves to be widely seen. It would be no surprise if it won an Oscar and Nabulsi, who is now working on a feature, is a talent to cherish.

Concordia discussion about ‘The Present’

Privacy & Cookies: This site uses cookies. By continuing to use this website, you agree to their use.
To find out more, including how to control cookies, see here: Cookie Policy
← World Music concert to ‘mark’ Brexit and promote global friendship (Aprils Fool!)
UK Asian Film Festival 2019: Bollywood icon Zeenat Aman – “no age appropriate roles” and gala opening film ‘Hamid’ review… →