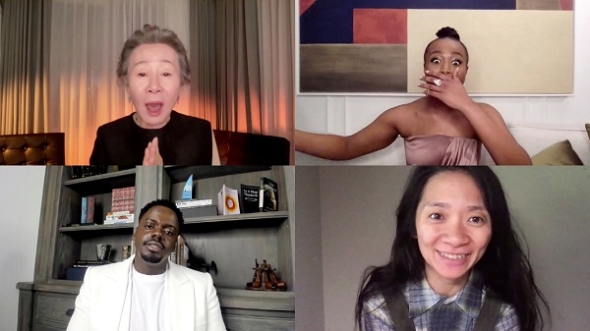 ASIAN American director Chloé Zhao was the big winner at the 2021 EE British Academy of Television and Film Arts (Bafta) Film awards yesterday, winning in four categories – but the night was stolen by another East Asian.

Presenters, including stars Priyanka Chopra Jonas and Asim Chaudhry (aka Chabuddy G), made the awards presentations either from the Royal Albert Hall or from Los Angeles. Hollywood star Renée Zellweger announced Best Leading Actor from LA – and the nominees all appeared on screen in Zoom style before the winner was announced.

The best reaction of the evening came from Korean Yuh-Jung Youn, when she won the Best Supporting Actress category – she said the British were seen as snobby people and then expressed her surprise and delight at winning.

She features in an indie film called ‘Minari’, about a Korean family relocating to the mid-west US. Hoon plays the matriarchal grandmother who often tells it like it is to her grandson – and so it was too with her acceptance speech.

Youn, 73, expressed her condolences about the recent death of HRH Duke of Edinburgh, Prince Philip and added: “Every award is meaningful but this one especially, recognised by the British people, known as very snobbish people. And they approve of me as a good actor, so I am very privileged and happy.”

She later told the press that she had been to Britain many times and her comments were based on her time about 10 years ago when she was in Cambridgeshire on an acting fellowship.

Playing down the idea that snobbery was entirely negative, she told the media: “You have a long history and you have your pride. Being an Asian woman I felt people are very snobbish, that is my honest opinion.”

She also played down Oscars talk. She appears in the Actress in a Supporting Role category along with Maria Bakalova (‘Borat Subsequent Moviefilm‘), Glenn CLose (Hillbilly Elegy), Olivia Colman (‘The Father‘), Amanda Seyfried (‘Mank‘). She said while she was well-known in Korea, she was not known outside the country.

One of her sons is Korean-American and when she gets English scripts she tends to ask them about it, she told journalists.

She said of ‘Minari’: “It just touches you.”

Her broadcast reaction to her win was posted on Twitter today by Bafta and has already garnered over a million views this lunchtime alone. (See below).

The film is partially based on director Lee Issac Chung’s own experiences of growing up in the US. (See details about where you can watch ‘Minari’ in the UK below).

There were also memorable reactions from other winners on the evening.

Teenage actor Bukky Bakray gasped and looked speechless on hearing her name being announced as the winner of the EE Rising Star Bafta – the only award which is voted on by members of the public.

She is the focal point of the film, ‘Rocks’ which is about how her school-attending teenage character has to look after her young brother following their mother’s very sudden and deliberate disappearance. She leans on her young friends for emotional and practical support.

Hugged by her mother and sister she said on getting the award: “Thank you to the Rocks family for showing what it means to live a life – I’ve never met women like you in my life.” (For the full reaction, see the video below).

She later told the media that ‘Rocks’ had an important story to tell. “It’s not flashy, it’s not crazy, there’s no guns, there are no stunts – even though I love those films.

“There is beauty in the mundane. It focuses on life and humanity,” she said at the Bafta winners press interview. ‘Rocks’ enjoyed its world premiere at the Toronto International Film Festival (TIFF) in 2019 and was in UK cinemas last year. (See below for current details). Acv reviewed the film at TIFF 2019. ‘Rocks‘ also won the casting award for Lucy Pardee. Many of the young cast make their professional debuts in the film.

Daniel Kaluuya who won a Bafta for his Best Supporting Actor role in ‘Judas And The Black Messiah’, reminded us what inspired him in playing the late 1960s Black Panther deputy chairman Fred Hampton.

He first recognised the award was for everyone who had worked on the film and praised actors Cathy Tyson, Roy Williams and Ashley Walters for inspiring him in his formative years.

He added: “I’d like to thank Chairman Fred Junior and Akua Njeri (Hampton’s fiancée) for partnering up with us and joining hands to bring this man to the position where he belongs – which is at the forefront of everything…and it’s an honour to be a vessel for him.”

He later told the media that he is learning the piano, is looking to work on a musical, and is writing and producing.

“There are a couple of things. It’s really exciting I just love collaborating and working with people. I am excited to learn and grow,” he said in response to a question about success beyond being an actor. ‘Judas and the Black Messiah’ is available to watch online (see rental details below).

Chinese-born Zhao, whose film ‘Nomadland’ is about a woman travelling the US in a campervan following a bereavement and unemployment, won a Bafta for Best Film, and Best Director award; her lead Frances McDormand won in the Leading Actress section and her cinematographer Joshua James Richards won in that category.

Zhao is only the second woman to win in directors’ category in its 53 years.

In her acceptance speech last night, she acknowledged her time in Britain, saying: “Wow. I think I just made my teacher at Brighton College really proud.”

She dedicated her award to the nomadic community and older people.

“We would like to dedicate this award to the nomadic community who so generously welcomed us into their lives. They shared shared with us their dreams, their struggles and their deep sense of dignity. Thank you for showing us that aging is a beautiful part of life, a journey that we should all cherish and celebrate. How we treat our elders says a lot about who we are as a society and we need to do better.” The only other woman director to have won before is Katheryn Bigelow for ‘The Hurt Locker’ in 2010.

Filmmaker Remi Weekes also won in the Outstanding Debut by a British Writer, Director, or Producer for his film, ‘His House‘, which he wrote and directed. In this, a refugee couple escaping conflict in South Sudan end up in British seaside town that has evil lurking beneath it.Original and something of a departure from the usual horror genre, it is available on Netflix. (See below).

Filmmaker Ang Lee who made ‘Life of Pi’ (2012) and the seminal ‘Brokeback Mountain’ (2005) among many other films, was presented with with his Bafta Fellowship last night.

For the full list of winners from last night

Nomadland – it is set to screen in cinemas in the UK from May 17 – when restrictions will be lifted on indoor venues; and it will be available online from Disney+ – from April 30 (four days after The Oscars in the UK).
https://www.disneyplus.com/

Rocks is available on Netflix
https://www.netflix.com/title/81040791

Judas and the Black Messiah is available from £15.99 on a number of platforms, please check the internet in your location

Rocks is available on Netflix
https://www.netflix.com/title/81040791