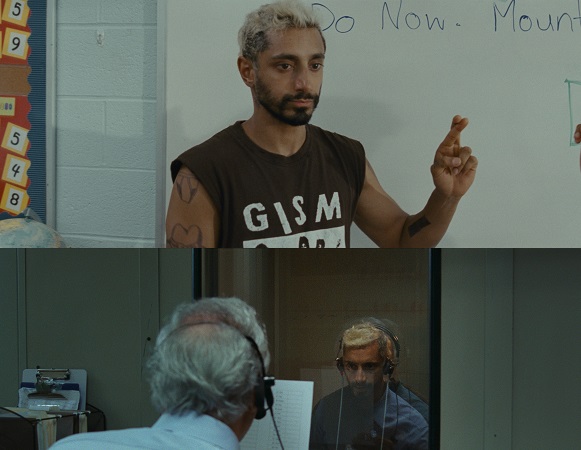 THE BOY FROM Wembley done good, innit? That might be how they put it in on the High Road there.

If Riz Ahmed wins an Oscar on Sunday (April 25) – it will be for a small indie production with a largely unknown director that has at its heart the subject of deafness.

Ahmed’s Oscar nomination for Leading Actor in ‘Sound of Metal’, directed and written by Darius Marder, was far from predictable in the way that perhaps the other Oscar nomination contenders always were – and that surely puts his achievement in some better context. (See the full list at the bottom).

Ahmed told www.asianculturevulture.com: “It means the world to me to get this level of recognition.

“It feels great to get this kind of encouragement from other actors and your peers.”

With the Oscars now just under a week away now and the film dropping for the first time on Amazon Prime in the UK last week, Ahmed, also spoke more widely to a handful of UK-based journalists about the profound effect the making of ‘Sound of Metal’ had on him and how it has influenced the way he sees himself as a storyteller and his craft as an actor.

He had a lot to say also about culture, art and identity and how they are in dialogue with each other and influence his own filmmaking choices.

His Oscar nomination for Actor in a Leading Role is the first for one of South Asian origin and one who is Muslim. There are many who will rightly seek inspiration from his nomination and none more so than the wider creative British Asian community at large.

So, this is a very big deal, even if the character Ahmed plays, Ruben, has no ethnic component.

This year’s Oscars on Sunday (April 25) and spilling over into the Monday here, will be a partially virtual ceremony, with sections from the Grand Union railway station in Los Angeles and the traditional Kodak Theatre in downtown LA.

Very powerfully and importantly, Ahmed put his feelings about his Oscar nomination in a wider context and while he said it is personally satisfying, he recognises individual success is not enough – we may be paraphrasing, but it doesn’t stretch the culture in the way that he truly wants. It has to be about more than one individual.

He feels Representation – an issue he has addressed in parliament (in 2017) is important – that storytellers from all sorts of backgrounds are given their chance to tell their stories – having a few more black and brown faces on screen is no bad thing, but this Diversity, he has said before, is like a burger topping, it doesn’t address the meat of the issue, which is Representation.

“Look at the Bafta nominations*,” he said speaking last week after the Baftas, “Adarsh Gourav, the debutant star of Netflix’s ‘The White Tiger’), and Tahar Rahim (‘The Mauritanian’) but there is further to go.

“Progress is not achieved by any individual… it is something that happens to a community.

“I am aware that the success of individuals doesn’t necessarily lead onto a whole system being changed.

“As well as celebrating individual successes, an actor should keep an eye on the bigger picture.”

That and stretching the culture go to the very beating of heart of what Ahmed does as an actor and as someone who is creating new work (‘Mogul Mowgli’) and Britain should celebrate him and his work far more than it does.

It may partially explain the sentiments behind his ‘The Long Goodbye’ – a musical album, short film and now musical stage show, in addition.

He described the album, released quite close to the first UK lockdown, as a break-up piece – one that he has experienced between himself and Britain.

It isn’t clear if his stay in the US will be more permanent – after all, he is married now, and his work is mostly there.

He told us in the 30-minute audio Zoom journalist roundtable that he chooses acting projects on the basis of whether they stretch both him as an actor and the culture itself.

Ahmed explained: “I take on projects that stretch me and stretch culture. If they don’t do both, then I shouldn’t do it.”

What is exciting about him is that he is always challenging himself – ‘Sound of Metal’ after all was a huge gamble – though it seems quite far from that now.

It was a small budget film made by a debutant narrative feature director. The film had its world premiere at the Toronto International Film Festival (TIFF) in September 2019 and acv saw it there and knew then that his performance was special. (Read our review here).

The subject of deafness has rarely been covered on such a large canvas; writer-director Marder had only directed a documentary before (‘Loot’ 2008) and Ahmed was entering two worlds he knew nothing of: heavy metal rock and being deaf. Ruben is a heavy metal drummer and part of a group that includes his girlfriend – his life begins to collapse around him as it is clear he can no longer hear. He joins a deaf community, learns to sign and all looks good from the outside. It isn’t.

Marder has said some actors were scared by the intensity he was seeking, but in Ahmed he found a willing ally.

Ahmed told us at TIFF that was blown away by the script and was pulled into a different culture – he told us even then deafness is not a disability in the way we choose to define it. (Watch our TIFF interview below).

“It’s a very emotional script and I had to go to some challenging places, whenever you have to do that, you learn a lot about yourself and a lot about your craft as an actor,” he said.

He learnt American Sign Language specifically for the role, and he also took drumming lessons, but it was his engagement with the deaf community that shifted his thinking in many ways.

“Something that really stayed with me is my time with the deaf community, understanding deafness isn’t a disability.

“There is a lot we can learn from the deaf community, I feel they taught me what listening really is – something you do with your heart, attention and energy – that was a very profound thing.
“It opened me in new ways as an actor.”

And not just as that – learning Sign Language made him grow, as a person, he said.

“It’s one of the amazing gifts of my life. It’s really a beautiful language. My sign instructor was telling me that hearing people are emotionally repressed compared to the deaf.

“I realised it’s true because we have to use words but when you communicate with Sign Language you feel a lot more emotional.

“I might be able to talk to you about my mum right now and have a normal chat but if I started doing it in sign language, I might find myself with tears in my eyes.

“There is something very deep about communicating with your body. I learnt a lot from the deaf community, I am so grateful to them – I learnt a lot as a human being and as an actor.”

Stretching the culture is key and so too is challenging not just himself – but audiences too.

His first film as a co-writer, ‘Mogul Mowgli’ premiered at the Berlin Film Festival to great acclaim, winning awards and screened in the UK at the London Film Festival in October and got a general release in between lockdowns in the UK late last year.

‘Mogul Mowgli’ tells the story of Zed, a British Asian rapper with Muslim heritage, who has to cut short a successful US tour and then has to abort a supporting role in another even bigger star tour as support – when he learns that he has to seek urgent medical treatment for an auto-immune condition.

Zed returns to the parental home in London and his relationship with his father, who has escaped the horrors of Partition, is central to the film.

It is lyrical and abstract in places and beautiful for it – but it is also challenging and asks questions of the audience.

“That’s always in my bones for me to continue to grow, and step out of my comfort zone as an artist and to take audiences with me and out of their comfort zones to places they may not have seen and to stories that have not been told. That’s really the combination for me.”

We might all look back and say that the ‘Sound of Metal’ and his Oscar nomination was what took him to his next level, just as his Emmy in 2016 for ‘The Night of’ really helped to establish him in the US.

“I think ‘Sound of Metal’ stretched me in terms of my preparation and learning skills and going places as an actor.

“I am really proud to see the way stretched culture in terms of Representation of the deaf community and being an open captioned film and for doing something innovative in terms of sound.”

Whatever happens next week – Ahmed has made a very significant mark – and it needs to be celebrated.

*Sir Anthony Hopkins won the Bafta for ‘The Father’