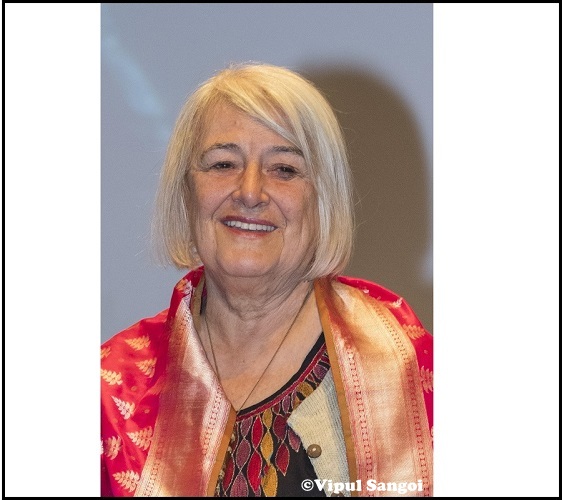 Naseem Khan, commentator, policy developer and a pioneer at the forefront of cultural change in the UK, has died aged 77.

SHE WAS THE PERSON whose report, ‘The Arts Britain Ignores’, published in 1976 drew attention to arts and cultural activity being undertaken by Britain’s Asian and African/Caribbean communities as being integral to British culture.

The report, jointly supported by the Community Relations Commission, Arts Council of Great Britain and Calouste Gulbenkian Foundation, was the first major study of this nature, mapping the extent of ‘ethnic minority’ arts being produced up and down Britain and together with other events, initiated a debate around cultural diversity.

The report raised the question of institutional support for artistic work from Britain’s Black and Asian communities, and argued that Britain was a much richer place culturally due to the contribution of such artists. It led to the formation of the agency, Minority Arts Advisory Service (MAAS), 1976 of which Khan was originally the director. (The agency ran from 1976-1995).

Khan, who was born in Birmingham on August 11 1939, came from Indian and German heritage. Her father, Abdul Wasi Khan, was a doctor who arrived in London to study and met her German mother, Gerda Kilbinger who was here to study English in London.

The couple couldn’t return to their respective homes due to the Second World War and the Indian Partition, so ended up settling in the UK, in West Midlands, together with her younger brother, Anwar.

The parents felt that the best way of getting their children to integrate was to send them to a a top boarding school, so Naseem was sent to Roedean School, where she never felt she fitted in. She was an original ‘Second-Generation’ Asian, although that phrase was not even coined at the time. Born a Muslim, she developed an interest in meditation and Buddhism.

Khan later went to Lady Margaret Hall, Oxford to read English. She then worked as a journalist and became theatre editor at Time Out. She left this to undertake the research into her seminal report.

She had a life-long interest in dance and took lessons from Pandit Ram Gopal (it is said she appeared in a few films as a dancer). He is the man largely credited as first bringing Indian dance to Britain.

She then went on to train in Bharatanatyam from Professor US Krishna Rao and UK Chandrabhaga Devi in their years in the UK. She founded The Academy of Indian Dance along with Tara Rajkumar in 1979 – now called Akademi.

In 1982, Khan organised an protest event, The Alternative Festival of India in Holland Park, London, showcasing and highlighting the talents of British Asian artists based in the UK, while the government led, Festival of India was going on and which promoted India’s past heritage and visiting artists from India.

Khan spent many years working as a journalist for the Guardian, and The Independent covering stories on Asian arts, writing a weekly column in the New Statesman and also working as a freelance arts consultant.

She worked on a large number of local authority arts and cultural plans – for Bedford, Gravesend, Redbridge, Newham, and for institutions like Blackburn Museum and Art Gallery and the Victoria and Albert Museum.

She set up her own consultancy for a while, called, Asian Leisure and Arts Planners (Alaap), for which I too did some work.

She was a senior associate with the consultancy Comedia for many years, and team leader for sections of their influential studies on Parks and Urban Open Space (1995), the Future of Public Libraries (1993), the Social Impact of the Arts (1997). She has head of diversity at the Arts Council of England from 1996 – 2003.

In between she co-edited (along with Ferdinand Denis), ‘Voices of the Crossing: The Impact of Britain on Writers from Asia, the Caribbean and Africa’ (Serpents Tail, 2000)

Khan married the journalist, John Torode (not to be confused with the Australian chef) and the couple had two children, Amelia and George, and lived in Hampstead.

Later they split up and she moved to the East End and began to carve out a new chapter in her working life. She championed local community development and got involved in regeneration projects aimed at creating creative spaces where people lived and worked.

An example of this can be seen when she was a patron of Friends of Arnold Circus – an organisation dedicated to the regeneration and upkeep of the Arnold Circus bandstand and surrounding Boundary Gardens located in Shoreditch, for use of the local community.

(She also wrote a monograph about Arthur Arnold, his brother, Edwin and his circus http://spitalfieldslife.com/2010/07/17/who-is-arnold-circus/ )
Naseem Khan was one of five Women of the Decade in the Arts in 1993 and was awarded the OBE for her work in 1999.

More recently, in 2016 – she undertook a project, What Difference Does Difference Make? This explored how cultural policy and practice responded to the changing ethnic diversity of Britain. Its aim was to understand the evolution of cultural practice from her 1976 report, ‘The Arts Britain Ignores’, and whether it was inclusive and multicultural, as well as set agendas for the future of arts policy and practice in the UK. More on this can be seen on the website – here.

Khan was diagnosed with cancer over a year ago and had been spending time with her family and grandchildren but remained indefatigable in her championing of South Asian arts.

She participated in the Navadisha International Dance Conference, focussing on South Asian Dance, held in Birmingham from May 20 – 22 2016 where she was honoured by her peers as, “We salute Naseem Khan as the game changer who shifted the debate around diversity and the arts in the UK”.

She passed away peacefully on June 8 this year, just after hearing the news that her memoirs had been accepted by a publisher. They are due out in November. Her funeral will take place on 20 June and there will be a memorial in September.

*Pictures: courtesy of Vipul Sangoi. Please do not reproduce the pictures without permission – thanks!

Privacy & Cookies: This site uses cookies. By continuing to use this website, you agree to their use.
To find out more, including how to control cookies, see here: Cookie Policy
← Mindy Kaling talks to acv (video) on the red carpet of world premiere of ‘Late Night’ at Sundance Film Festival
Sundance Film Festival 2019 (January 24-February 3) – our picks from here →