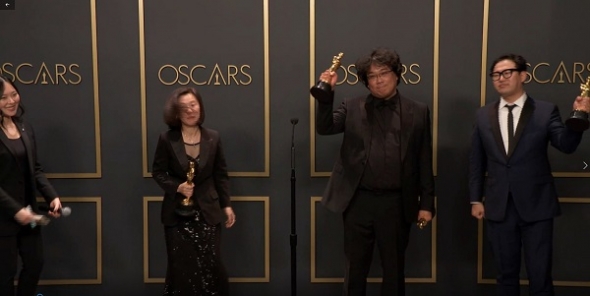 PARASITE has gone and done it!

South Korean director Bong Joon-Ho’s film won four prizes on the evening – including what many regard as the top award – the best picture award, beating off other fancied rivals, including the British Sam Mendes directed war drama, ‘1917’.

It was a night of glittering success for the South Korean and his team who made the film – with many of them at the Oscars to mark the moment of film history. Never has a foreign language film won on Oscar in its 92-year history. As well as Oscars for best picture, director and original screenplay, it won in the foreign language film category as well.

The film (out in the UK now – see our review below) began its journey in Cannes a little less than a year ago – sadly www.asianculturevulture.com was not able to see it there, but we were at the festival to mark its triumph in Cannes and it was the first Korean film to win the top prize and one of few to have broken through from Asia in general.

It’s a proud for moment for Asian cinema and South Korea has a veritable film culture and its presence and power at international festivals such as Cannes, has been growing in recent years – ‘Parasite’ winning the Palme d’Or was the culmination of a particular journey – but few could ever predicted it would scoop not just one Oscar (predictably, perhaps, in the foreign language category) but three others – including the biggies, of best picture and best director.

Bong is rightly being feted and he got a chance to reflect on his win shortly after backstage. He talked about the “beauty of cinema” and how it can cross barriers and divisions…

On a lighter note talking about his next project he embarrassed (in a good way) his translator Sharon Choi. Note the way he says “filim” as many Indians say it too – are we going to get a ‘filim’ revolution… Let’s hope so.

Taika Waititi’s ‘Jojo Rabbit’ took the Oscar for best adapted screenplay. The New Zealand director-writer is of Maori and Jewish descent. His film which acv found uncomfortable, though being a comedy and satire, focuses on a young German boy who has an imaginary friend (Hitler played by Waititi himself) during the Second World War. Waititi nevertheless backstage, dedicated his award, “to all the indigenous kids who live in the world who want to do art and dance and write stories. We are the original storytellers and we can make it here as well. Thank you. (Kia Mihi- Maori)”.

Brit Cynthia Erivo did not get an Oscar in the actress in a leading role category.

Her portrayal of 19th century abolitionist and anti-slavery freedom fighter Harriet Tubman lost out to Renée Zellweger’s performance as another real person, Judy Garland, in the film, ‘Judy’.

‘For Sama’, the British-Syrian documentary lost out to Barack and Michelle Obama’s film production house’s ‘American Factory’ and it could not repeat its Bafta success.

Elton John and fellow songwriter Bernie Taupin won the Oscar for best music – original song category with ‘(I’m gonna) Love Me Again’. Amazingly, Erivo had a second nomination in this category and she helped to put the song ‘Stand Up’ in ‘Harriet’ together with Joshuhah Brian Campbell.

In the end, ‘1917’ did win in two other categories: sound mixing with Oscar for Mark Taylor and Stuart Wilson; and Guillaume Rocheron, Greg Butler and Dominic Tuohy collecting an Oscar for visual effects.

US writer, actor and showrunner Mindy Kaling drew plaudits for her style – she was among the presenters.

US actor-singer Utkarsh Ambudkar did a little rap number and won a legion of new fans from the looks of it.

Another celebrity of South Asian heritage also drew favourable comments for her dress sense and style was US presenter Lilly Singh.

For more on Oscars (to come): https://www.oscars.org/oscars

HIGHLY original and funny, ‘Parasite’ is fully deserving of its Oscars – comic, insightful and poignant in equal measure.
The story is a simple one: a poor family living on the edge in Seoul, South Korea – inveigle their way into a rich one and slowly began to take over that household at one level, as domestic staff.
Of course, not everything goes to such an easy plan – the comedy element is writ large, but beneath all that, something deeper and more substantial lurks in Bong Joon Ho’s wonderfully dark and comic satire.
For this critic, it is about the nature of inequality – illustrating vividly and forcefully, the wide gulf that exists between the way the very rich and the very poor live their lives. There are no bad characters in this film, in a sense.
There is a rich humanity in Bong’s work – as there was in ‘Okja’ – but unlike in that film, Bong does not need an overgrown pig or a sentimental child to make the point about humans being alienated from each other.
This is, arguably, what lies at the heart of Bong’s message as much as there is a clear one – it is a film with a lot to say about our particular here and now, and its historic Oscar win represents a moment hopefully, when we renew a way of looking at each other with respect and empathy, whatever our background, material status in life, or racial and ethnic origins.
‘Parasite’ is on release in the UK now…