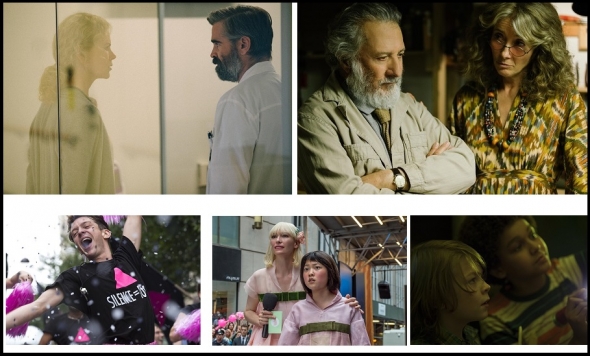 Reviews of the films www.asianculturevulture.com saw during the Cannes Film Festival 2017 ♦️️ All in competition (filed before awards)

♦️️The Killing of a Sacred Deer

GREEK director Yorgos Lanthimos caused quite a stir with ‘The Lobster’ in Cannes in 2015, and this year he was back with Colin Farrell in another leading role in this film.
Set in contemporary America, on the outer edges of a big city there, Farrell plays Steven, a prominent cardiologist, whose family life, along with ophthalmologist wife Anna (Nicole Kidman) and children, Kim (played by Brit Raffey Cassidy), 14, and Bob (Sunny Suljic), 12, on the surface of things, looks quite idyllic. They are a rich, comfortable, loving family.
Into this mix comes Martin (Barry Keoghan), a 16-year-old who right from the start exudes a certain menace and threat (without any of us Steven included, aware of what that might be).
It transpires the Steven was unable to save Martin’s father on the operating table and there is a strong suggestion that negligence played a part.
Martin extends his malign influence towards Kim and Bob, who both become transfixed and eventually pay a difficult price for their intense association.
Martin and Kim are involved and Bob has a certain teenage but non-sexual infatuation.
The family bonds are tested and dissolve at critical junctures. There are sexual undertones everywhere but Lanthimos prefers to leave them hanging, except when the comely Anna has to provide relief to a colleague of Steven’s to extract some information.
It’s hard to know exactly what Lanthimos is doing with all this – by turns, it is funny, dark, bleak, absorbing. And weird.
At least with ‘The Lobster’ set in the future as it was, there was some indication that our future relations – governed as they might be by intrusive technology – might encourage a quite troubling order than the one we experience today.
This is set in the here and now and makes no such allowances but it is very watchable all the same, provided you don’t ask too many questions along the way.
ACV rating: ** ½ (out of five)

THERE are many who believe that director Noah Baumbach is the truest son of Woody Allen in a cinematic sense, in the modern era.
In many ways, this is a delight: intelligent, smart, funny, poignant.
Harold Meyerowitz (Dustin Hoffman) is an artist whose fame and stature have long since diminished and he is living out his years, eccentrically and bitterly.
His family are rather tolerant, son Danny (Adam Sandler) especially, and the rather less besotted half-brother Matthew (Ben Stiller) form the central core in this film.
There’s a lot of cute dialogue and the above three, Sandler included, are good value but personally speaking Baumbach has never been one to set the pulse racing on the big screen.
His talent (considerable and growing) would be better served in TV or even in the theatre; this is a wonderful cast – Emma Thompson too, as one of Meyerowitz’s wives and Judd Hirsch as rival and friend LJ Shapiro, but in the end…it doesn’t really seem to offer anything other than some amusement and diversion.
That’s fine but the popcorn crowd lured by Sandler and to some extent, Stiller, will be vexed and left cold because it’s really quite cerebral.
ACV rating: ** ½

THIS MAY WELL turn out to be one of the big finds of the festival.
Political, passionate, driven and hugely moving in its last quarter, French director/writer Robin Campillo has made an important film.
About ACT UP, an HIV and AIDS pressure group, highly visible and more active in the US and France (than it was here) in the late 1980s and 1990s, this pulls you in, perhaps more slowly than it might with a slightly different emphasis but ends with great dignity, pathos and power.
Diverse in its casting and ostensibly about a despised (mostly by mainstream society) minority community, it has a lot to say about the fight for equality, justice and the sanctity of human life.
It takes a bit of time to get going and the one too many group meeting discussions threaten to bog the drama down in the politics and strategy of the 1990s.
When it gets away from that and focuses on the emerging relationship between Sean (Nahuel Perez Biscayart) and Nathan (Arnaud Valois), it is beautiful.
The last 20 or so are unforgettable and just so because Campillo makes you care about this couple and their terrible predicament.
Biscayart’s acting has to be one of the standouts of this festival and don’t be surprised if he gets the acting award.
It got the loudest applause of any film www.asianculturevulture.com saw from the morning press screenings. If it had been a little tighter, with less ragged political discussions, it would reach the type of audience it needs to affect change. It might still. Accept it on its own terms and have hankies.
ACV rating: *** ½

THE SUBJECT of much advance publicity because it was the first Netflix film to appear in competition, it’s to all intents and purposes, a very watchable adult fairy story.
Its premiere screening to the press started ignominiously, when a quarter of the screen was cut off, prompting booing and loud hisses.
Slightly delayed by the enhanced security at the door and darkness on entering, it was difficult to make out what was going on – were the press making a point about the big cinema viewing experience? Surely watching it with a bunch of strangers is part of the charm… No, it was because no one could see the film properly.
Okja is a big pig and is created to save mankind – Korean director Bong Joon Ho cooks up a goofy tale and lets rip. Tilda Swinton is a corporate head – Lucy Mirando, who believes she alone can save the planet. Jake Gyllenhall, as Dr Jonny Wilcox, is her mad media sidekick and off his animal-loving rocker.
It’s a little predictable and the lines between the baddies and goodies are drawn and re-drawn at the very end (keep watching after the credits).
It’s quite fun, the CGI of Okja is sweet and it does have a few things to say, albeit slightly tongue-in-cheek.
ACV rating:***

DIRECTOR Todd Haynes brings his trademark style and attention to detail in this story which spans 50 years and links one deaf girl with a boy who believes his hearing is failing him.
It is, as you might expect, beautifully shot and the story is well-formed and there is a clear arc that is easy to follow.
There isn’t much dialogue and it’s a very visual experience (and being partially deaf) quite delicate and seductive in its process.
Based on the novel by Brian Selznick, it has a level of detail which makes you want to believe it is a true story.
What makes this film a triumph is that its period depictions, 1927 and 1977 are both equally good and have the requisite energy and to appear connected and relevant.
Imbued with a childhood curiosity, it’s very much a film that all the family can enjoy and while it is realism, it does have nods to the supernatural and fantastical.
Perhaps, if Haynes had let his imagination go a little, it might have been something that stays with you a bit longer than it does.
ACV rating: ***