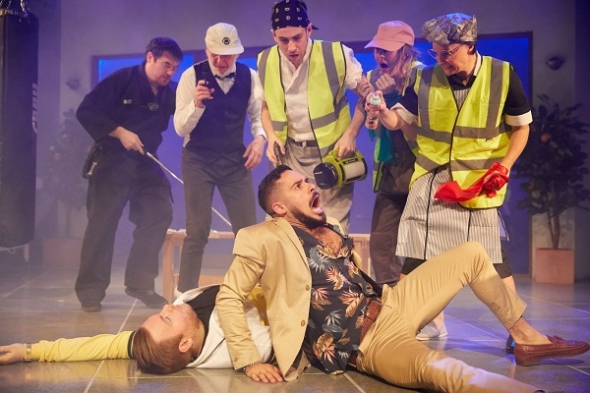 CURRENTLY playing the dastardly ‘Borachio’ alongside TV ‘Bake-off’ star Mel Giedroyc in a contemporary production of Shakesepeare’s ‘Much Ado About Nothing’ is Nicholas Prasad.

It makes quite the contrast for him – he was last in the star spotlight with ‘Miss Meena and the Masala Queens’ last summer. Prasad played one of the lovable drag artists who are being brought back to the life for the British Asian Festival (you can read about that here).

Prasad told www.asianculturevulture.com about his new Shakespeare role: “I am really enjoying it, sometimes on paper it’s a very two dimensional role and he’s just seen as playing games – but here we see him being given a three-dimensional role and it’s good playing someone who undergoes a transformation.”

This version of Much Ado is set in modern day Sicily and plays on the mafia element. It’s easier to accept loose talk can have very dangerous consequences in this environment.

“This is in the heartland of the Cosa Nostra and a world still governed by strict codes of honour, family, loyalty and fidelity.

“Some Much Ados can feel summery and whimsical, and about love games and triviality. Here we have gone into a very dangerous world – we are all familiar of the mafia world through commercial cinema – and in this world talking too much and hearsay can land you in hot water.”

The play is part of the Kingston (in Surrey) Rose Theatre celebrating 10 years and this production closes next Sunday evening (May 6) having opened on April 13.

As well as being discernibly set in modern day Sicily, all the action takes places in a luxury spa, and for those most drawn to the play’s comedy and language play, Prasad is reassuring.

“We don’t want to sap the joy of our the play, we are looking to retain its good humour, banter and comedy and give people what they have come to see in a Much ado about nothing play, but when you get into the second act, you’re dealing with these mixture of emotions and family disloyalty and there is slander and mudslinging where there’s a lot of bad blood, feuding and how reputation is at the forefront of everything.”

In the play, there are two distinct sides – there is Beatrice (Mel Giedroyc) and Hero (Kate Lamb) and Benedick (John Hopkins) and Claudio (Calam Lynch). Initially, Hero and Claudio enjoy a traditional courtship and look set to get married, while Benedick and Beatrice, both older and somewhat opposed to the institution of marriage and each other, skirmish and verbally duel, until a vicious rumour threatens to upset everything.

There isn’t any ethnic component to Borachio in this play.

“It’s colour blind casting, and it’s easy to suspend belief in a contemporary production of Shakespeare,” he explained.

There’s a bit of modern music too – with Prasad taking up the saxophone.

“I learnt it at school and it’s good to be able to use it, there’s a bit of folk and jazz in keeping with the style of the production.”

A professional actor for around six years, he’s had stints with the Royal Shakespeare Company (RSC) and the bulk of his work has been in the theatre – in ‘Ross’ at the Chichester Festival Theatre and ‘A Mad World My Masters’ at the Barbican in London and staged by the RSC. He trained at the London academy of music and dramatic art (LAMDA).

He said he likes the variety and if he feels he is doing a lot of one thing, he tries to do something else, but likes to keep things balanced.

His family – father, of Indian origin and mother, English, are both involved in film and the arts, and never dissuaded him from life as a thespian.

“I count myself very fortunate, my parents gave me undying support but I know plenty of actors who had to prove themselves at law or medicine to placate their parents and then to justify what they wanted to do; it’s an alien world.”

A bit like a Mafia stakeout with a TV ‘Bake-off’ star caught in the very middle of it.

Listing
‘Much Ado About Nothing’ at the Rose Theatre, Kingston, 24-26 High Street, Kingston KT1 1HL.
Until May 5 7.30pm. Check times Tuesday-Friday.
Tickets/Info: http://www.rosetheatrekingston.org/whats-on/much-ado-about-nothing
There are special deals for under 26s.