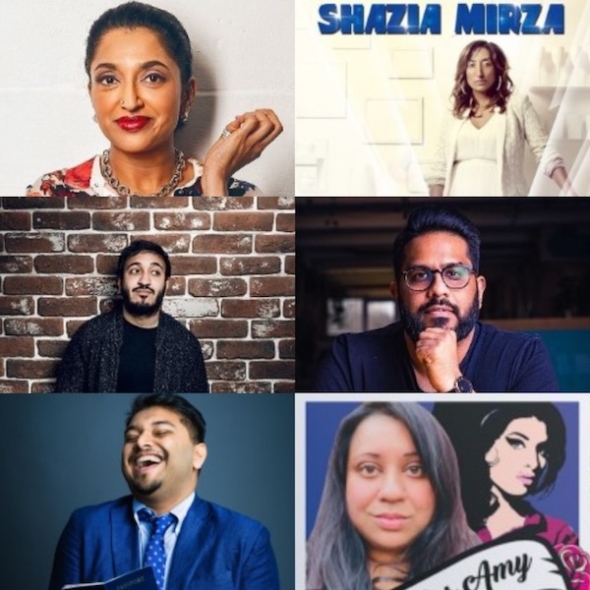 COMEDIAN Sindhu Vee is not one to miss at Edinburgh Fringe Festival this year, and there are shows until the end of this month (August 29).
Vee brings not one, but two shows to the Fringe; she was nominated for Best Newcomer in the festivals 2018 cohort of comedians for her debut show ‘Sandhog’ and has appeared on ‘Live at the Apollo’, ‘QI’ and ‘Sex Education’. Acv spoke to her in Edinburgh after seeing the show that year – but before the accolades. That interview is here.
Her stand-up show ‘Alphabet’ covers the hair we want, the friends we have and living the vast difference between virus and viral, whilst the second show ‘Work in Progress’ sees Vee perform a new one hour long set.

‘Bilal Zafar: Care’- As seen on the BBC

WINNER of Edinburgh Fringe’s Best New Act of the Year and Best Newcomer of the Year nominee in 2016, Bilal Zafar returns to the festival with his new show, ‘Care’, about his year working in a care home for the wealthy.
As a 21-year-old who spent three years watching films for his media degree, it was far too much responsibility for him, he says reliably.
Seen on BBC One, Two, Channel 4 and Radio 4.

‘Sid Singh: Illegally Funny’- How to hack the US Supreme Court and more

HUMAN RIGHTS lawyer and comedian Sid Singh’s new show ‘Illegally Funny’ explores what being clever actually means, by making you, the audience, laugh at the crazy things he has done as well as making you realise what ‘great’ things you have done. Don’t be shocked. He also gives you tips on how to hack into the US Supreme Court… you never just how useful that might be. Be there.

AWARD-WINNING stand-up comic Shazia Mirza’s show ‘Coconut’ explores her time during lockdown, sitting in her pyjamas and pulling out in-growing hairs, whilst watching documentaries about Ted Bundy and worrying she’d chosen the wrong career.
‘Coconut’ was nominated for Best Stand Up Tour in Channel 4’s National Comedy awards, whilst Mirza has appeared on shows including ‘QI’, ‘The Jonathan Ross Show’ and ‘Celebrity Island with Bear Grylls’. But the real question is how much of this is about being brown on the outside and ‘white inside’? Or is it…you might have to attend to find out…

AMY WINEHOUSE’s biggest fan, Suchandrika Chakrabarti’s new comedy show ‘I Miss Amy Winehouse’, takes you back to Suchandrika’s own partying days in the 2000s and includes trivia around the musical star who died 11 years ago. Quizzes are promised, don’t say you haven’t been warned.

ESHAAN AKBAR’S new show of the same name is a work in progress and will feature jokes he’s experimenting with for his tour in Spring 2023. There will be some best bits, as well as some new work he might well use in his tour depending on audience reactions.