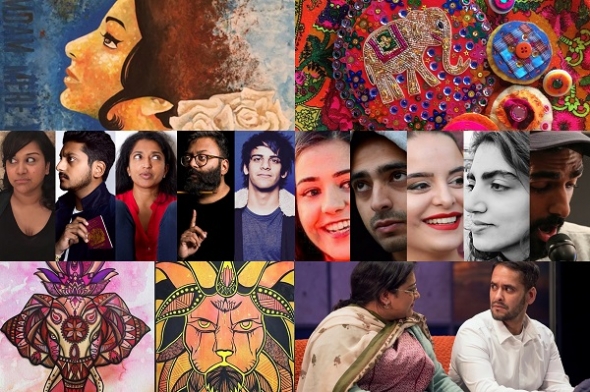 Three-day melting pot of talent, different art forms and quite possibly, some chai and samosa…

IF YOU WANT TO SEE THE POSSIBLE stars of the future and revel in many things Asian, you should head down to the British Asian Festival (May 4-6).

Curated by theatre company, Rifco, and hosted at its home of Watford Palace Theatre, there’s a real variety of acts and artists looking to make you laugh, sing and maybe even, cry.

There is also a tribute to Bollywood icon Sridevi, who died earlier this year – with a screening of one of her hit films of more recent times – ‘English Vinglish’.

Held bi-annually, and now in its third edition, Rifco artistic director Pravesh Kumar explained to www.asianculturevulture.com: “It’s about celebrating British Asian culture and wanting to give an opportunity to emerging British Asian talent.”

Rifco has been at Watford Palace Theatre since 2011, having first formed 1999, and is well known for its varied and diverse theatre programming – but the festival allows for a greater breadth of performers and artwork.

There are also displays of visual art by Mr A Singh and Dotty Art.

Kumar said: “As a theatremaker, I meet a lot of different artists and from varied art forms and because we work with new writing and make plays – sometimes we can’t work with stand-up comedians or poets.

“This is an opportunity to work across all the art forms and celebrate all the different work and the artists behind them.

“It’s really taking the ideas behind Rifco Associates Scheme (a talent development initiative) a little bit further – and opening the doors and giving platforms to artists that are already good at what they do and shining a spotlight on them.”

Among the highlights of the first evening is a comedy night devoted to Asian stand-ups. Hosted by two characters from the popular Rifco play ‘Masala Queens’ – ‘Pinky’ (Vedi Roy) and ‘Preetho’ (Harvey Dhadda), there’s a chance to see both the better-known and the still up-and-coming.

“It’s very exciting,” Kumar added. “It’s being hosted by our resident drag queens. These characters were so loved we’ve brought them back to host this really exciting stand-up night which is all about emerging talent.”

Kumar also highlighted the spoken word event on Saturday evening (May 5) – a mixture of performance poetry and artists who communicate through the power of language. Titled With Apples and Snakes, and hosted by Shagufta Iqbal, and Sophia Thakur, you will be able to hear Nafessa Ahmed, Zia Ahmed, Ronak Patani, BananaSharma and Zahrah Sheikh.

On the same day, and just before and just after are two performances of Rifco’s ‘Pyar, actually’, which returns after a successful sold-out run last year.

Written by actor, performer and stand-up Sukh Ojla – you can see her on the first evening as part of Pinky & Preetho’s Comedy Night – it’s a tale of missed opportunities as Polly and Bali meet after many years – or is it?

Among the highlights on Sunday is Short Stories with The Asian Writer, bringing together both the latest crop of talent from among its ranks and past winners of its popular short story competition. There’s also a chance to participate in a creative writing workshop. Among those you can hear are Meera Bateb, Mona Dash, Farhana Khalique, Shibani Lal and Jocelyn Watson and it’s hosted by Farhana Shaikh, editor of The Asian Writer.

Closing the festival is the Sridevi film – which became something of a sleeper hit in 2012; more of an independent production than a big Bollywood production, it tells the story of Shashi, who knows little English but is keen to learn.

“We really wanted to mark Sridevi with one of her last films. Her character is living abroad (in the US) and is learning English and about life in a new country. It seems a fitting film to screen and we really wanted to celebrate her life,” Kumar stated.

“Oh, yes, personally, very much,” he revealed. “It’s a cream tea with a British Indian twist and mixture of sweet and savouries.”

There are also events and activities for children, check out the link to the full programme.