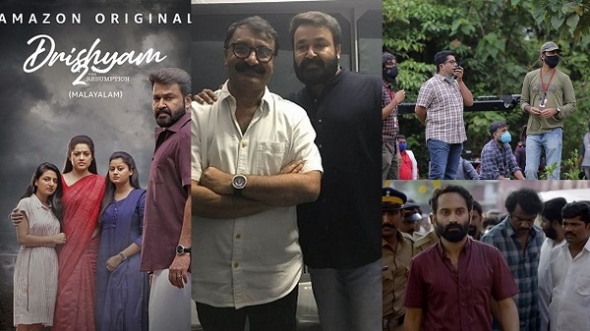 FOR A while now, Malayalam language cinema (from the state of Kerala in southern India) has been attracting critical acclaim and accumulating numbers on streaming platforms, where there is often a ready-made global audience.

Starring one of the big names of Malayalam language cinema at present, much of the excitement centres around Fahadh Faasil (known popularly as just Fahadh), whose ability to play a range of characters has won him a considerable fan following and many awards.

In ‘Mālik’, Fahadh goes from a young man in 1960 to a senior citizen in 2018, as the film explores developments and challenges to a coastal community in Kerala over that period.

The son of well-established filmmaker Fazil, his debut was ignominious. ‘Kaiyethum Doorath’ in 2002 was a flop and he retreated to the US and his studies there.

Today, he is one of Malayalam language cinemas biggest stars and his pairing with former film editor, now turned writer-director Mahesh Narayan has got the whole of India talking.

Narayan himself is a relatively new entrant, a graduate of the MGR Government Film and Television Training Institute in Chennai.

His early work was as a commercial editor, graduating to becoming a filmmaker with ‘Take off’ in 2014.

It was his first film with Fahadh in one of the lead roles. It’s about a group of nurses from Kerala who get stuck as the Iraq War breaks out and are desperate to escape.

He followed this up with ‘CU Soon’ which dropped on Amazon Prime last year and proved hugely popular. It was shot entirely on an I-phone during the limitations of a local covid lockdown and much of the action takes place on a screen.

It got rave reviews and many praised its invention and its freshness in approach to a story which was hardly original at the outset – it starts with two people looking for companionship online – but ends up as a tale about sex trafficking.

Another story that recently wowed India is ‘Drishyam 2’ – essentially a crime drama that features another of Kerala cinema’s biggest names, Mohanlal, a veteran star of many years.

Originally shot for the big screen, it dropped on Amazon Prime earlier this year and again attracted a lot of India-wide media attention for its content and high-grade production.

The first Drishyam (2013) set box office records at the time and many believe it still shows a way for forward for mainstream Hindi cinema which even before the pandemic was faltering.

Director Jeethu Joseph was in little doubt as to how Mollywood – as it is sometimes referred – is getting attention on a par with the much better-known Bollywood.

He told www.asianculturevulture.com: “Quality content, technicians and artists results in high quality films. And that’s what has taken Malayalam cinema to its heights.”

He said the Drishyam story also “had universal appeal beyond the boundaries of language, family relationships, and is a fight between the strong and the powerful against the powerless.”

Malayalam film critic CS Venkiteswaran cites its strength as its flexibility and ability to deliver with relatively modest budgets.

Talking to acv, he said: “Malayalam cinema can work with a small crew. Even mainstream actors such as Fahadh Faazil or Tovino Thomas were ready to work on small crew films.

“Social distancing and the ban on congregations worked in our favour. We could easily adapt and innovate in crisis situations. Along with thematic diversity, it (pandemic times) gave a new fillip to Malayalam cinema.”

He also sees a different starting point for much of Malayalam language cinema.

“It’s always had a different trajectory and history. It focused on social themes and class conflict. This thematic diversity as well as its milieu has been its strength,” said CS Venkiteswaran.

“Our cinema has always been unique with great subjects. We came up with high intensity new subjects and experimented in every era.

Many say there has also been much innovation over the last 10 years, when some other regional cinemas were less willing to take risks and stuck to reliable formulas – stars and traditional stories to get audiences.

‘Peruchazhi’ (2014), which hit 500 screens worldwide, became the biggest Malayalam release ever and showed an appetite for unconventional fare – it’s a political satire about a politician and his advisor and stars Mohanlal.

More recently the pandemic and losses estimated to be about ₹900 Crores (£90m) forced the industry to look outside the box and to the streaming or OTT space, as it is known in India.

Another tranche of films quickly dubbed ‘newgen’ started to impact not just India but the wider world as many looked for different content online.

The New Yorker was led to comment on ‘Joji’ (2021) – another Fahadh hit, and based loosely on Shakespeare’s ‘Macbeth’, that it “offers a sardonic vision of patriarchal tyranny”.

Narayan was also behind ‘Aarkkariyam’ (‘Who knows?’) which also dropped on Amazon Prime in late January this year.

With much of the industry still in a state of considerable firmament because of covid restrictions – both in terms of shooting and cinemas being open – Bollywood director and producer KC Bokadia, who directed ‘Lal Badshaah’ (1999) with Amitabh Bachchan, sounded a note of caution.

“Yes, Malayalam cinema is making good films. But they will have to sustain this trajectory to maintain the position they have achieved. The path ahead can always be shaky even with big budgets at their disposal,” he said.

‘Mālik’ is available from Amazon Prime from today (July 15).

THERE is also a new generation of independent feature filmmakers from Kerala who have been attracting a lot of critical and foreign attention.
In 2019, www.asianculturevulture.com covered ‘Jallikatu’ which premiered at the Toronto International Film Festival and at the same time, ‘Moothon’ (‘The Elder one) also premiered there. Both are raw and visceral and contain overlapping themes of violence, retribution. There is often deep and intense social commentary if you go looking for it.
Perhaps best known to UK audiences is the work of Sanal Kumar Sasidharan who spoke to acv about his 2019 Venice film, ‘Chola’ (‘Shadow of Water’) and introduced himself with ‘Sexy Durga/SDurga‘ in 2017 here.
Just as in the films of Lijo Jose Pellissery (‘Jallikattu’) and Geetu Mohandas (‘Moothon’), it is not for the faint hearted. All these films have a social edge and address very live debates within India itself and outside.
Sasidharan most noticeably addresses gender relations (and violence) and did so again with the more gentle ‘A’hr’ (‘Kayattam’) which screened at the BFI Southbank during the London Indian Film Festival last month.
There were also rave reviews for ‘The Great Indian Kitchen’ which featured at the UK Asian Film Festival a month before.
Director Jeo Baby’s seeming gentle social drama about a newly wed settling into her husband’s family contains deeper themes and asks important questions about men and women and their roles in contemporary society. It is available on Amazon Prime.
There has been a long and venerable tradition of filmmaking in Kerala.
The first Malayalam film, ‘Vigathakumaran’ (1930) was produced and directed by a dentist, JC Daniel. It was followed by ‘Marthanda Varma’ (1933), which wasn’t released in theatres due to legal issues.
‘Balan’ (1938) became the first sound film of the industry. ‘Jeevitha Nouka‘ (1951), ‘Neelakuyil‘ (1954), ‘Newspaper Boy‘ (1955) were some of the successful ventures over the next two decades.
The 1960s, when colour films were introduced, saw many films based on novels and short stories of Thakazhi, P Kesavadev, Parappurath, MT Vasudevan Nair and Thoppil Bhasi.
The 1970s, the Golden Era, saw the so-called New Wave Malayalam Cinema and Middle Stream Cinema. Adoor Gopalakrishnan’s ‘Swayamvaram’ (1972), where lead Sharada won the National Film Award for the Best Actress and Nair’s ‘Nirmalyam’ (1973), which won the National Film Awards for the Best Film and Best Actor for PJ Antony, were some of the best films of the decade.
The 1980s brought international fame. ‘Elippathayam’ (1981) won the British Film Institute award for Most Original and Imaginative film.
‘Piravi’ (1989) won the Caméra d’Or at Cannes, the Sir Charles Chaplin Award at Edinburgh International Film Festival and Prize of the Ecumenical Jury at the Locarno International Film Festival.
National Awards winners during the decade included ‘Chidambaram’ (1985) for Best Feature Film. ‘Manjil Virinja Pookkal’ (1980) and ‘Rajavinte Makan’ (1986) made Mohanlal a superstar, while ‘Yavanika’ (1982) made Mammootty a household name.
The 1990s saw commercial Malayalam cinema gaining ground and the rise of Suresh Gopi, Jayaram, Dileep and Kunchako Boban. Mohanlal’s ‘Guru’ (1997) became the first Malayalam movie to be sent to the Oscars. ‘Swaham’ (1994) won the Bronze Rosa Camuna Award at the Bergamo Film Meeting, while ‘Marana Simhasanam’ (1999) won the Camera d’Or at Cannes.
Parallel cinema gained a foothold in the 2000s. ‘Mazha’ (2000) was about the love story of a music teacher and his student, ‘Nizhalkuthu’ (2002) explored the unjust nature of punishments and ‘Oridam’ (2005) dealt with the struggle of a sex worker to find her place in society.