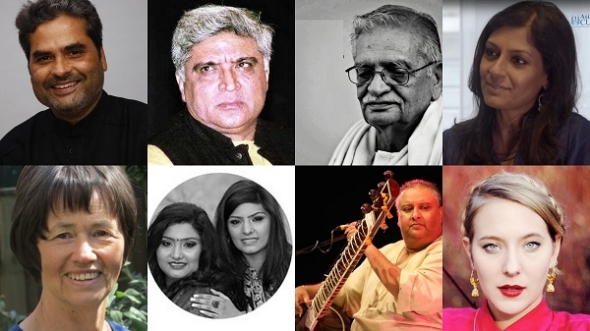 Urdu and Hindi are phonetically the same and gave rise to a rich literary tradition that itself gave birth to particular forms of music and poetry, storytelling, and other art forms…

IT IS DESCRIBED as the largest poetry festival of its kind online – but it also brings together a host of stars from the world of cinema and music.

For the first time Jashn-e-Rekhta (Festival of Urdu language) comes to London – but only virtually because of the global pandemic.

Among the musicians who also can be heard performing at Jashn-e-Rekhta is Shujaat Khan who performed on the sitar in the recent BBC TV series, ‘A Suitable Boy‘ as a court musician.

There will be three virtual stages and a festival pass will not only give you access to these but enable you to catch up on any session for 15 days after the festival is over.

The sessions of poetry – mushaira, literature, storytelling (dastongoi), ghazals, sufi music and qawwali have been brought together by the Rekhta Foundation, first created by Sanjiv Saraf.

The India-based industrialist and art and music lover created the festival six years ago and the foundation which from the festival sprung has been in existence since 2012.

Saraf was planning to bring the festival physically to London but because of Covid, the festival has moved online and will now be a mixture of pre-recorded items and zoom debates with participants speaking from their home locations.

“The language is so rich, magical, elegant, there’s so much poetry, romance and there’s a whole depth of literature and culture behind the language and Sanjiv was very keen to share it and to bring it to London,” explained Ritu Kumar Robbins, of the trustees of the UK branch of the Rekhta Foundation and a London spokesperson for the festival, Jashn-e-Rekta (Jer UK).

Set up six years ago in India, it has established itself as something of a cultural driver.

“It’s a very popular festival among Hindi and Urdu speaking people because of the cultural space – people attend because it’s just not about the language.”

London was chosen because organisers estimate that Urdu is among the most widely spoken in the capital and it was another reason why the festival is being hosted here for the first time.

“It isn’t just about South Asian communities, we want to share the language and its benefit with others.

The recent BBC TV series, ‘A Suitable Boy’ sparked an interest in Hindustani (and Urdu) and illustrated the wider cultural milieu from which these written scripts originally sprung.

“The emphasis is really about bringing people together culturally,” continued Robbins. “Cinema is a great and unifying medium, contemporary Bollywood is almost everywhere, and Pakistani dramas are very popular in India and here.”

She said the festival was keen to reach out to young people, not just because they are important in carrying the language to future generations, but that culturally people often connected through popular media and that then drew them to the language and culture.

“There’s a regeneration of interest in Urdu among a young generation.

“The music is attractive – my own daughter who is half-English, half-Indian has developed an interest in it and some of her English friends have also acquired an interest in the language through the music,” said Robbins.

She told acv that the festival is likely to have a physical edition in London within the next two years.

Among the strands the festival will cover is Dastangoi – a 13th century form of Urdu oral storytelling, often associated with well-known tales such as ‘Layla Majnun’, ‘Alif Layla wa Layla’ (‘The Arabian Nights’) and ‘Sindbad’.

The festival begins tomorrow at 3pm (BST) and after an inaugural address by Saraf on Stage 2, it then launches into ‘Cinema Kal Aur Aaj’ with Javid Akhtar and Manoj Muntashir. Sessions will be in Urdu with English translation where possible, Robbins said.

Jashn-e-Rekhta is supported by The Bagri Foundation.

Most people across Pakistan and Northern India speak the same language and can understand each other, but the scripts are different, and though Urdu is also used in India, in written form, it’s not as widely as disseminated as Hindi, in its Devanagari (Sanskrit) form.

Both languages belong to an Indo-European family but Urdu, like Arabic is written from right to left, while Devanagari is like English, left to right. Urdu uses a Persian-Arabic (Nastaliq) script and is Persian in origin – and Persian is part of the same Indo-European branch of languages and therefore related to Sanskrit.