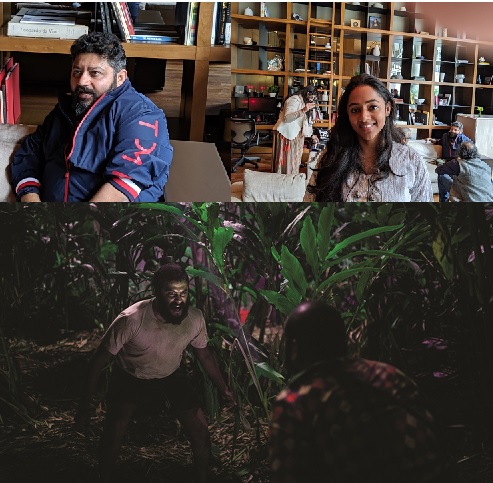 Different and mixing fable and fantasy, this should stir you…

While it might be billed in some quarters as a horror flick, it is according to Pellissery himself, a satire, and the story is expanded from a short story.

In some ways it’s very simple, a buffalo escapes slaughter and becomes the focus of people who want to capture and many who want to eat it.

“A bull runs wild and the entire village is turned upside down, mentally and physically,” Pelliserry told us just after the world premiere of the film at the Toronto International Film Festival last month.

The film starts off in one place – Pellissery said it’s quite acceptable to laugh at the reactions of the various protagonists and their desperation to capture the bull.

As the film progresses, you realise it isn’t a laughing matter – lives are at stake and intense rivalries have been sparked.

The film escalates in tension and violence and has a thrilling and incredibly staged climax – worth watching just for this!

“It’s that connection between men, mud, and animal and a cycle (of events which have their own momentum),” Pelliserry chuckled.

“It took a while for us to create,” revealed Pellissery.

He had the idea for ‘Jallikattu’ some time back, but he had to shelve it because getting the bull correct on film proved tricky – and he went off to make two more features before ‘Jallikattu’ became his seventh film.

*Spoiler alert about the bull itself…

The bull is mechanically operated – there is someone inside who operates it and is strong enough to control the shell.

“There is minimal VFX (special effects,” said Pellissery. “We worked on it (the bull) for a long time.”

It’s very convincing and adds to what is a dark film in essence – and about human passions – or should that be animal passions.

It’s really very imaginative and as Pellissery said, it starts in one place and ends in quite another mixing – fantasy, horror, suspense and possibly even some primordial time travel in there.

While it is violent to some degree, he argues that it is necessary to show the characters’ intent and beliefs.

“It’s not about creating something violent- it’s about what is required to deliver the major impact and in this film that is violence.”

He also said the violence in the film needs to be seen in the context of life generally.

“You look around and you will see violence 100 times more in daily life,” he asserted.

It should be said that the violence in ‘Jallikattu’ has purpose and meaning and shouldn’t put you off on its own.

Pellissery’s previous film, ‘Angamaly Diaries’ was also recognised for its violence, but was critically acclaimed and proved to be a box office smash.

Kerala and the Malayalam film industry have been enjoying something of a resurgence domestically and internationally – Venice (in August) premiered ‘Chola’ by Sanal Kumar Sasidharan who hails from the same state.

“There’s a lot of freedom in Kerala,” said Pellissery. “And there is an intelligent audience.”

The market may not be huge (in comparison to Bollywood and commerical Hindi cinema), but there are producers willing to finance films that challenge and are experimental, said Pelliserry.

For actor Santhy Balachandran, who plays the character of ‘Sophie’, it was a huge thrill to work with Pellissery.

“I was very excited when I got the call, I’ve seen most of his films and wanted to work with him,” she revealed to acv at TIFF.

While two male characters dominate the film – she is seen as something of a prize and a woman who has aspersions cast upon her character; Sophie is independent and lives life the way she wants.

For Balachandran, the film is raw and naturalistic: Pellissery does not rehearse too much and almost all on set have worked with him before and many of the crowds are made up of non-professionals.

She is a rising star and ‘Jallikattu’ is her second film, having made the transition from stage to screen; she continues to act in the theatre.

For her, the film goes to the very heart of what it means to be human.

“Where do you draw the line between humans and animals? Is that line even there…?”