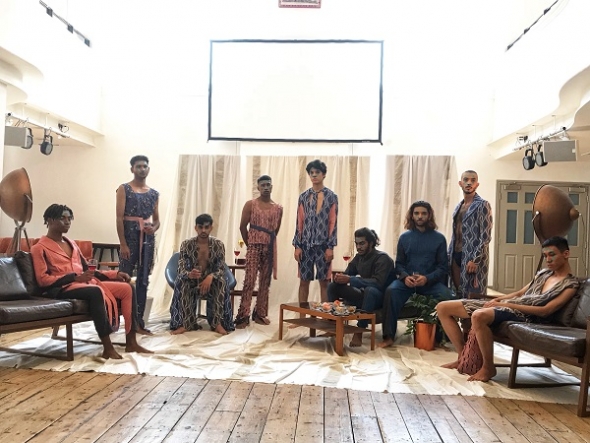 From faux feather alternatives to biodegradable fabrics, eco-chic for men has arrived…

IT’S BEEN JUST six months since London based British Bangladeshi menswear designer Rahemur Rahman made his debut at London Men’s Fashion week which we covered here on www.asianculturevulture.com.

Since then the Central Saint Martins BA Fashion Menswear graduate has continued to work relentlessly on his mission to create sustainable ethical clothing made in Bangladesh.

He represented the country at The British Council’s International Fashion Showcase at Somerset House and picked up the Outstanding Achievement Award at the British Bangladesh Fashion & Lifestyle awards along the way.

His SS2020 collection was launched again at the bi-annual celebration of menswear in the capital on Saturday (June 8) at Hanbury Hall, just off Brick Lane in East London.

It was a venue that Rahumur chose himself after he felt it represented his brand and ethics.

Speaking to www.asianculturevulture.com, he said: “When the British Fashion Council approached me to exhibit as part of their showcase at their main venue I politely declined.

“It was important for me to remain at this end of Hanbury Street, it’s almost where you can draw a border line. This side is where traditional Bangladeshis and their community cafes are, and it’s where my grandma knows – whereas the other side represents gentrification and I wanted to be on the side where I grew up.”

Feeling connected with community is a large part of Rahemur’s work and he’s currently collaborating with a brand in Dhaka to create sustainable casual clothing for the capital cities young fashionistas.

For his own label too, his focus is on creating clothing that is ethical, natural and sustainable that doesn’t harm the earth. He said: “The idea is that you should be able to bury any of this. Everything is natural, made from the dyes to the fabric itself which over time will decompose and hopefully even create a new tree.”

Standout pieces in this latest collection include a silk block print fabric based on a design he found in the V&A Museum archives that date back to West Bengal before it became Bangladesh, and which he used for inspiration and a striking laser cut fabric; designed to be his ‘ethical alternative’ to wearing feathers.

He explained: “I was thinking about how to feel opulent and how people wear like wearing feather boas to feel that way, so I created a version for people who don’t wear animal products, allowing them to feel opulent too. It took a while to create but the final design moves and looks textured just like real feathers.”

And with that he’s whisked off to his next interview. There’s certainly no shortage of interest in what Rahemur is creating, with sustainability being the buzzword for many aspects of modern living, his ethical brand is paving the way for a new type of menswear that puts the planet and its people at the heart of it. There are lessons for all of us…