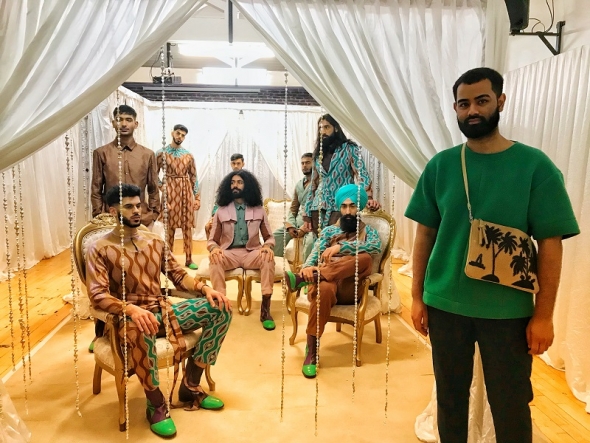 LONDON FASHION WEEK MENS may not attract the same level of coverage as the main event, but it’s equally as impressive.

It’s a fashion extravaganza in the capital that celebrates and showcases the creativity that goes into menswear design in the UK.

If you’re a fashion-conscious gent, it’s where you’ll find inspiration for your wardrobe for the coming season.

Amongst this year’s participants is British Bangladeshi Designer Rahemur Rahman who debuted his colourful heritage infused line at the Kobi Nazrul Centre, just off Brick Lane in London on Saturday (January 5).

Speaking to www.asianculturevulture.com at the event, about the influences behind his stylish and sauve collection, Rahman said: “Interiors of the last 1980s and early 1990s is where my initial ideas came from.

“I grew up in East London on the Isle of Dogs in a council flat and we had a typical British home with all the aspects people would recognise like damask wallpaper, but we also had nuances of our South Asian culture which I loved.”

Colour is a key component in Rahman’s work and his striking palette features pastel pinks and mint greens juxtaposed against rich teal hues and a retro brown, just like the home in which he grew up.

Rahman admitted: “I took a photo of my mum against our wallpaper as my starting point but she doesn’t know because she’s unaware that I’ve kept old photographs and memories.”

Inevitably, when one thinks of Bangladesh and fashion, the garment industry does spring to mind.

Thankfully, the British Bangladeshi Fashion Council which launched Bangladesh Fashion Week London three years ago are changing these perceptions by creating opportunities for independent designers to get recognition on an international level.

This is something Rahman is passionate about.

He told acv: “I really don’t believe in the ready-made garment industry, it’s breaking us a country.

“But I do believe in culture and the heritage of textiles and that’s what I’m supporting.

“I’m behind all the women and men who are working in small workshops continuing traditional techniques whose jobs are getting depleted, so I work with the artisans from fair-trade organisation Ananya.

“As designers we have to try our best to give them work before they give up and become Uber drivers.”

The London Fashion Week Men’s collection was designed to with a tilt to South Asian men across the diaspora, whatever their religion or ethnicity.

Rahman cast models who were Indian, Bangladeshi, Pakistani and Nepali to represent the diversity of the subcontinent itself and a certain shared heritage.

He said: “The whole collection is about togetherness. Within South Asia there is so much division, but actually everyone can be part of the story just by being together. That’s also reflected in the way my showcase features music from Leo Kalyan, a queer composer and Roker, the footwear designer whom I collaborated with to design the boots that give the finishing touches to my vision.”

They’ll be another change to see Rahman’s work again at the International Fashion Showcase by The British Council at Somerset House, London, from February 11-25. He has been selected as one of 16 emerging international designers of talent and will represent Bangladesh.