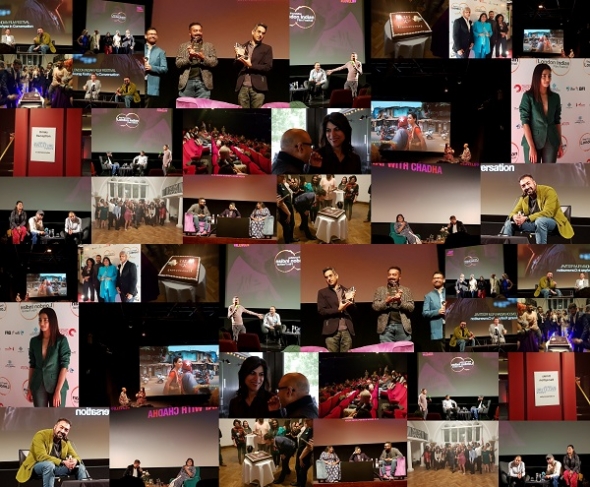 MARKING 10 years of the London Indian Film Festival was a big thrill and a highlight of the nine-day South Asian film extravaganza in the capital for us.

Five years ago, when we were less than a year old in July 2014 (11 months to be precise), we hosted a reception for the LIFF film, ‘Hank and Asha’ at the ICA. We made one of our very first videos.

Ten years on, we’ve both come a long way, as it were.

Cary Rajinder Sawhney, founder and executive director of LIFF, told ACV founder Sailesh Ram about his idea for the festival in 2009 and met him at the BFI Southbank to discuss. Ram was editor of Eastern Eye then. It’s great to think Sawhney and LIFF have got to 10 and Sawnhey bagged an MBE in the process this year.

Our reception for the film, ‘Sir’, and its screening at the BFI Southbank on Sunday, June 23 was a terrific event, made all the more special by the excellent support of LIFF and Benugo’s relatively new riverfront balcony bar.

It premiered in Cannes last year during Directors’ Fortnight and we were fortunate enough to have covered it – though we held our interviews with director Rohena Gera and leads Tillotama Shome and Vivek Gomber for the UK release… alas, it still doesn’t have a UK deal, but at least LIFF brought this undoubted little gem to these shores. Gaylene Gould, head of BFI events, did a grand job with the lively and informative Q&A and the audience certainly got stuck in too. It will be interesting to see what Gera does next…

Her film picked up the audience award in Birmingham for the festival edition up there, and staving off the competition from ‘Article 15’ the anti-caste cop drama which has been convulsing some parts of India, while still doing very decently in metros and other areas of the country.

Writer-director Anubhav Sinha spoke to us about why he felt compelled to make this film and it hasn’t been easy – away from the interview, he told us about standing his ground with Indian censors who initially wanted lots of cuts and were leaning towards an outright ban. He went to a higher level, and they were far more sympathetic and laid the groundwork for its eventual release at the end of last month around the world through Zee Studios.

Sinha’s film took the prestigious Audience Award from the capital’s edition of LIFF and he told us he is set to make a film about gender violence next.

Directors hitting it out of the park – if you’ll excuse the expression – came also in the form of Anurag Kashyap and Gurinder Chadha.

Those who listened intently to Kashyap’s musings with fellow director Peter Webber at the BFI Southbank on Friday, June 28 cannot have been disappointed. Often dubbed India’s Quentin Tarantino, the director (who also acts and has a cult following in Tamil cinema), was incredibly frank about substance abuse, relationships, and mental health. He does everything at huge speed – whole scripts take him just two or three days. He shoots films like a guerrilla filmmaker – the admissions, both professional and personal, offered a real insight into a film personality who still has much to offer and has already achieved so much.

The impact of ‘Manmirziyaan’, his second big studio film after the flop that was ‘Bombay Velvet’ , was somewhat muted, as a slew of #MeToo accusations surfaced via social media and Kashyap was inadvertently caught up in it because director Vikas Bahl was accused of impropriety and was part of Phantom Films, which he had helped Kashyap to create along with director Vikramaditya Motwane and producer Madhu Mantena. Media reports in India earlier this year stated that Bahl has subsequently been cleared of any wrongdoing, but the company was wound up in October 2018.

Kashyap didn’t get into this very much, and did so in a manner of passing only – but it’s clear it was a difficult time and the success of ‘Sacred Games’ has helped him to put that whole episode behind him.

On the same day in the morning (June 28), Kashyap was joined at Bafta, Piccadilly by fellow Netflix web series filmmaker, Richie Mehta. Both ‘Sacred Games’ and ‘Delhi Crime’ have enjoyed wide critical and popular acclaim.

It was a wide-ranging discussion with Ashanti Omkar, BBC Asian Network broadcaster and film expert, moderating the discussion. Both spoke expansively about the nuts and bolts of their productions and touched on the system that has fostered a thriving and separate sector which probably does not exist to the same extent in Britain.

However, Netflix’s recent acquisition of a part of Pinewood Studios will change that. In India, a whole ecosystem has developed where producers are investing in productions with a view to selling on to Netflix or Amazon Prime, which has a far bigger reach in India. Mehta said he submitted his project (as it was then) to 10 producers, and they all came on board, and got their money back and more with the Netflix deal announced at the Sundance Film Festival (though figures were not disclosed) earlier this year.

‘Saturday Afternoon’ is Bangaldeshi Mostofa Sarwar Farooki’s remarkable one-take film loosely based on the Holey Artisan bakery attack in Dhaka in July 2016. Chilling and well-acted, Farooki wanted to ask deeper questions about what sort of society produced the perpetrators. It might be a little too black and white for some and the hatred for the one Indian who evades immediate capture raised other questions. Nevertheless, Farooki’s film reminded acv of ‘Hotel Mumbai’, which chronicles the 26/11 Mumbai attacks, but has a more nuanced picture of what produces such terrorists – who are fanatics and hate anyone different to them.

Gurinder Chadha was very open about her beginnings in, Chai with Chadha, on June 22, talking to film journalist, Mike McCahill at Picturehouse Central in Piccadilly, London. She revealed that she was able to put down a deposit on a bungalow for her parents with the £32,000 she got for making ‘Bhaji on the beach ’ (1994). McCahill did well to get her onto casting and finding talent (Parminder Nagra, Keira Knightley and Archie Panjabi, all in one film – ‘Bend it like Beckham’ 2002 ) and ‘Angus, thongs and perfect snogging ’ (2008), but the conversation was a little too lop-sided about the past and not the present – with ‘Blinded by the light’ (to be released next month in the UK) hardly mentioned.

Finally, the festival in London closed with Ritesh Batra’s ‘Photograph’ – anyone expecting a repeat of ‘The Lunchbox’ may have been very disappointed.

‘Photograph’ does have merits – both Nawazuddin Siddiqui and Sanya Malhotra are excellent but the film, an usual and mostly unarticulated romance between a Mumbai street photographer and middle class college girl, is too slight and stretches credulity in what is still a realist-led fable. ACV saw it at its world premiere at Sundance – the audience there clearly loved it. Batra’s general direction and Tim Gillis’ and Ben Kutchins’ cinematography is delicious and saves the film at times from being excessively ponderous.

India does need to be challenged on some of its prevailing social mores – but both ‘Sir’ and ‘Article 15’ do it with gusto and flair – the former subtly and gently, the latter, courageously and unflinchingly…

Here’s to another 10 years of LIFF… ! (Sailesh Ram, editor of www.asianculturevulture.com)