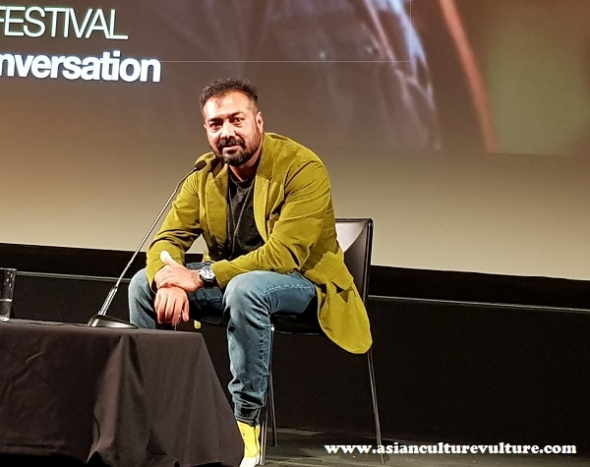 IN WHAT was probably one of the most candid in conversations with a film director at the BFI Southbank, Anurag Kashyap opened up about his struggles with mental health and how he dealt with it.

He also talked about what drove him as a filmmaker, saying it was one form of therapy and it was clear his passion and commitment to telling stories started early and was prompted by bullying, abuse at school and a difficult relationship with his father.

He was very honest and frank, talking about his inability to hold down relationships (he has been divorced twice and has a college-age daughter), and his alcohol and drug abuse.

Just under two years ago, he disbanded his successful film company, Phantom, following a scandal in the wake of #MeToo allegations aimed at fellow and founding partner director, Vikas Bahl. Bahl has been more recently cleared of any impropriety, but the fallout was deep and took its toll on Kashyap.

Understandably, Kashyap did not talk about this particular episode, but it appeared to form the backdrop to another difficult time in his life and his issues with mental health, depression and substance abuse.

The precise timeline for these battles was not always clear in the talk.

He told the audience about a period in the west, not long into his filmmaking career when he was experimenting with drugs and abusing alcohol – it sounded like an escape from problems in India where his early films faced bans and/or censor cuts.

It was ‘Dev D’ (2009), a film inspired by the classic and original ‘Devdas’ that allowed him to recover himself and now he splashes out on shoes as a way of dealing with his personal demons.

However, later on in the BFI talk with fellow director Peter Webber (‘Girl with a Pearl Earring), he said: “Everybody loves to work with me – I don’t have a problem with that, but I can’t keep a relationship and I can’t keep accounts, two things that absolutely don’t work.”

He said he was a giving person, but a person who knew him well suggested that he found it hard to take what might be willingly offered in return and Kashyap said a ‘balance’ was hard to strike and affected his way of working.

He joked that it was simple in that he always took what was on offer (the audience laughed) – but the problem was deeper and more about his insecurities.

“The fear of depending on someone strikes my moviemaking – I don’t depend on anyone,” he revealed. “Emotionally also, I don’t want to depend on anybody. Professionally it works for me.”

He said he didn’t trust drugs or medicine to help him and instead, and at that time, looked for a counsellor who treated people in a different way.

“Eventually I found one who figured out that I have an affinity with water, so I swim every morning and that is my therapy.”

He started writing short stories when he was seven or eight, inspired by the many books he devoured from comic books to Hindu texts such as ‘The Mahabharata’, he found at home or in the school library.

It helped him to deal with bullying and abuse when he was young, though he didn’t elaborate on this subject or what form the abuse or bullying took.

He was at a boarding school in Delhi and his father, an engineer, had borrowed money to send him there.

Kashyap senior wanted his son to go into IT or a similar field, but the Varanasi-born Kashyap fled to Mumbai, harbouring an ambition to be creative and loosely dreamed about being involved with films.

In Mumbai, he started writing TV soap operas and become a film script doctor – in a talk at the Jaipur Literature Festival in 2018 acv attended, he told the audience of over 1,000 people about hanging out at the Prithvi Theatre (made famous by the Kapoor family) and getting work there.

He got to know filmmakers through his writing and got his first break through auteur Ram Gopal Varma. His early films, including his debut feature, ‘Paanch’ (2003) attracted the ire of censors and he faced obstacles in getting them released, and sometimes had to resort to the courts, funds permitting, to get them out in India. Some films got to international film festivals but he pointedly advised a filmmaker, during the Q&A part from the floor, not to make films for festivals.

“It is simply a means to an end. Your films will find an audience,” he advised.

Earlier in the day at Bafta in Piccadilly, he discussed his Netflix series, ‘Sacred Games’ in a little more detail along with fellow Netflix series creator (showrunner) Richie Mehta who made ‘Delhi Crime’ about the infamous gang rape in city in December 2012.

The difference between the two is that Kashyap’s nine-part series was commissioned; Mehta’s was picked up as it hit the Sundance Film Festival in January of this year and dropped onto the global streaming platform in late March this year. ACV covered it.

Kashyap, at the Bafta discussion, also talked about his way of working – which is a bit like a guerrilla filmmaker, assembling the camera and the actors almost surreptitiously and separately.

“I didn’t have any money,” he said by way of explanation, and not wanting to draw any attention to what he was doing. At the BFI, he told the audience he says yes to projects and then works out how they can be delivered.

He has also a smaller parallel acting career and was asked about it by moderator Ashanti Omkar, a BBC Asian network broadcaster and film journalist, at Bafta.

Kashyap made light of his work in front of the screen, telling the audience he far preferred being behind the camera.

“But sometimes the money is too good and helps me to fund my next movie,” he quipped.

Kashyap’s best known film in the west is probably ‘Gangs of Wasseypur’ an epic two-parter that first premiered in Cannes in 2012, and featured in LIFF later that year and went onto secure worldwide distribution.

The filmmaker has produced many movies too and has had 10 features make the Cannes Film Festival, either as director, writer or producer. He helped to produce India’s most successful foreign film in recent years, ‘The Lunchbox‘, whose director, Ritesh Batra has a new film, ‘Photograph‘ which closes LIFF this evening.

Among Kashyap’s two most recent releases as director are ‘Manmarziyan’ and ‘Lust Stories’ which is available on Netflix, and both hit screens in 2018.

The festival continues in Birmingham until Monday (July 1) and then continues in Manchester, Halifax and Stockport until July 8.
For tickets and information, please see: http://birminghamindianfilmfestival.co.uk/

Privacy & Cookies: This site uses cookies. By continuing to use this website, you agree to their use.
To find out more, including how to control cookies, see here: Cookie Policy
← ‘Article 15’ – Why I had to make this film about caste violence, director Anubhav Sinha tells acv on day of world premiere at LIFF
‘Healed’ – Manisha Koirala, putting your best foot forward, changing the narrative in Bollywood; capital and masters; and the message and travels of Guru Nanak… →