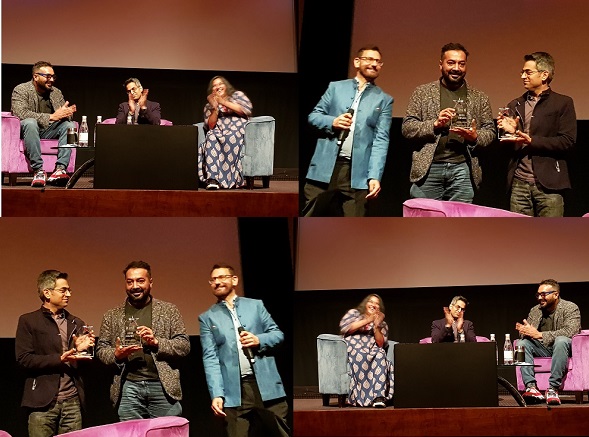 DIRECTOR Richie Mehta – the director and showrunner for the successful Netflix series, ‘Delhi Crime’ told a BAFTA audience this morning he was taking time out to recharge.

“Don’t be a showrunner and a director,” he warned, speaking to filmmakers, writers and others assembled at Bafta in Piccadilly, London today, as he and fellow Netflix series filmmaker Anurag Kashyap, also one of India’s best-known independent feature filmmakers discussed, Making an Indian web series – with Ashanti Omkar, BBC Asian network presenter and Indian film expert as the moderator.

Kashyap is here in London as a guest of the London Indian Film Festival (LIFF) and is set to discuss his work at the BFI later this evening with director Peter Webber (more on Kashyap and this talk on acv tomorrow).
Kashyap’s film, ‘Yellow Boots’ (2010) came to LIFF and the fest is celebrating its 10th birthday this year.

Both filmmakers were presented Icon awards by Cary Rajinder Sawhney, LIFF founder and executive director at the end of the 90-minute talk.

ACV was among the first people to watch ‘Delhi Crime’ earlier this year – two episodes were screened at Sundance Film Festival in its episodic strand – and just before its screening in Park City, it had been announced that the seven-part police procedural drama about the infamous Delhi rape case had been acquired by Netflix.

Netflix has now commissioned series 2 and 3 on the success of Mehta’ s original – but he has himself stepped back from directing them. Mehta told acv just before the talk, he needed to take a break and is still exploring subjects for his next work.

The new series follows the same format and is understood to feature some of the same characters as in the first ever ‘Delhi Crime’ and as the title suggests continues to mine stories from real-life Delhi criminal cases.

This morning, Mehta spoke about some of the challenges behind making the first series and what drove the real-life cop, Vartika Chaturvedi, who is essentially the main protagonist of ‘Delhi Crime’.

It’s widely acknowledged that without Chaturvedi (played by well known indie actor, Shefali Shah), the Delhi rape case would not have been solved so quickly. The accused were put through a fast track trial and jailed and five of the seven men still face the death penalty. One committed suicide in jail and another was a minor (17) and served the maximum jail time (three years) in a reform facility.

Mehta’s work is wholly derived from interviews with policemen and policewomen at the very heart of the investigation into the Jyoti rape and murder case.

A personal family member high in the Delhi police force encouraged Mehta to make a film about the investigation and allowed him access to files – initially he hadn’t been focused on Chaturvedi and conducted many, many interviews to build a picture of the investigation.

“But about 15 policemen I spoke to told me said you have to speak to her,” Mehta revealed.

Kashyap whose ‘Sacred Games’ for Netflix is a screen adaptation of Vikram Chandra’s novel of the same name, commended Mehta on ‘Delhi Crime’ and said; “It is the most empathetic portrayal of the (Indian) police I have ever seen.”

Mehta pulls you in on a very human level, showing officers’ lives outside the investigation – Chaturvedi’s own college-age daughter is desperate to leave Delhi and sees her place at a US university as a way out of a city and a country that is less than sympathetic to young ambitious, and independent women like herself.

Mehta revealed this daughter storyline is based on a real cop – but not Chaturvedi, whom he said is now stationed in the north east of India.

Similarly, a cop – who is trying to get his daughter married and meets a family in the hope of arranging the marriage – revealed to Mehta that was what he was doing just before he started to work on the case. Mehta told the audience that once the man had revealed to the other family he was a policeman, they didn’t take the proposal forward.

One of the series’ great strengths is allowing audiences to see and understand the pressures Indian cops often are under. While the general perception is that many are corrupt and not much good, Mehta shows some are extremely dedicated and trying to do the right thing.

Mehta said that originally he had not thought much about the title, and that they usually come to him in the edit.

Just days before its world premiere at Sundance, a member of his team suggested ‘Delhi Crime Story’ like ‘American Crime Story’ – but after the Netflix deal, he agreed it could just be ‘Delhi Crime’.

He told the audience too about the issues around subtitling and dubbing – it was revealed to him by Netflix that about 90 per cent of the audience who would watch his film, would do so in their native tongue – thereby making the subtitling – and long arduous process Mehta did himself – almost superfluous.

But both directors and the audience agreed that something is lost with dubbed material. They, however, accepted the fact that dubbed films reach far bigger audiences and in countries like India, it is the predominant practice (as opposed to the English-speaking world generally).

Mehta discussing the role of Chaturvedi in the investigation was sure that without her the criminals would not have been brought to book so swiftly.

“She went down to the hospital – not all cops would do that and she saw her (Jyoti), maybe for only two seconds, but it was enough for her to feel like this was an attack on all women.”

The London Indian Film Festival continues until Saturday, June 29. There are only returns now for the closing gala film, ‘Photograph

Privacy & Cookies: This site uses cookies. By continuing to use this website, you agree to their use.
To find out more, including how to control cookies, see here: Cookie Policy
← UK Asian Film Festival 2019: Bollywood icon Zeenat Aman – “no age appropriate roles” and gala opening film ‘Hamid’ review…
UK Asian Film Festival 2019 – Zeenat Aman, Bollywood star of yesteryear: ‘I am a feminist’ – as fest opens today… →