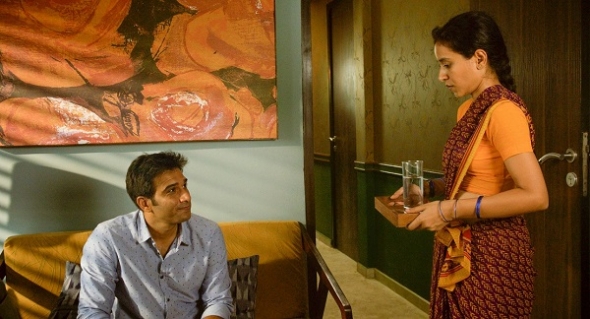 www.asianculturevulture.com is supporting today’s screening at the BFI Southbank as part of the London Indian Film Festival. ‘Sir’ had its world premiere at the 71st Cannes Film Festival and is a poignant ode to love and longing…(Spoiler alerts)

ONE OF THE MOST REMARKABLE films that acv enjoyed seeing at the Cannes Film Festival in 2018 was ‘Sir’ (‘Monsieur’), the debut feature by Rohena Gera, which was screened as part of the 57th Semaine De La Critique (Critics’ Week). It’s a delicate love story between a maid and her employer. (More on this later).

Now it’s part of the London Indian Film Festival (LIFF) and the final screening takes place today (Sunday 5.15pm) at the BFI Southbank for which www.asianculturevulture.com is a partner.

‘Sir’ is the story of Ratna (Tillotoma Shome) who arrives from the village to work as a maid to Ashwin (Vivek Gomber), a rich kid at his flat in Mumbai. Through their interaction, the film explores caste and class politics in India, relationships between the sexes, friendship and asks whether love can blossom between two people across the social divide.

Shome – whom audiences will know as the maid, Alice in ‘Monsoon Wedding’ and Gomber is the producer/ actor of ‘Court’, share a wonderful on screen chemistry – he is the rich young man suffering from melancholia and ennui while she has joie de vivre and get up and go.

The relationship is delicately constructed around the rituals and life in the household and not much is said, she brings him water, tea, cooks his dinner and tells him about her story.

She is a widow, and is interested in learning ‘tailoring’ while he – SPOLIER ALERT – has just been jilted by his girlfriend and is supposed to be a writer – but really seems to be suffering from depression.

As Ashwin (Gomber) learns more about her, he finds himself attracted to her, they live in the same house, she has her space and he has his, yet the gulf between them seems insurmountable.

Rohena Gera, the director whose first feature film this is, said: “I grew up with home help and I struggled with it, as there is racism and segregation within the home.

“I’ve grappled with this class difference that exists in India all my life. When I was a child and I lived in India and we had live-in help in the house, and that was how we grew up.”

Gera, who was born and grew up Pune, later went on to study creative writing at Stanford University, California and then did her Masters in Fine Arts at Sarah Lawrence College in New York, said: “As a child there was someone who was my nanny, and she took care of me and I was very close to her, but there was clear segregation.

“I always had trouble with this dynamic, even as a child and I didn’t really know how to understand it. I then went to study in the US for my undergrad, and I was at Stanford talking about ideology and philosophy, and then I would come home, and everything was the same.

“It was very difficult coming in and out of India, and as much as you might want to change things you can’t change them over night. I kept asking myself – what can we do?”

India has a domestic workforce of 40 million people roughly – mostly women who work informally with no rights in conditions that could amount to modern slavery. They have no minimum wage or health care or any type of social security and are totally dependent on their employers

“I hope my film will spark debates about how we treat these women – and more generally all exploited people. How to change things? I asked myself this question all my life. My film will probably disturb people, but I hope it will give hope to others.”

Although the film does draw attention to the life of domestic workers, Gera has made a love story between two people who are equal despite, their social circumstances and asks whether this can happen and if the status quo can be challenged in a country like India.

Along with directing, Gera has also written the screenplay for ‘Sir’, and began her creative career working in literary affairs with Paramount Pictures in New York.

She has written scripts for Hindi cinema directors and also wrote more than 40 episodes of the successful television series, ‘Jassi Jaisa Koi Nahin’ (‘There is no on like Jassi’) based on the original Colombian tele novella, ‘Yo soy Betty, la fea’ – which became ‘Ugly Betty’ in America.

Gera has also made a documentary ‘What’s Love Got to do with it?’ (2013), a feature looking at love and marriage in modern India.

Lead actor Tillotama Shome spoke to acv at the International Film Festival and Awards Macao (IFFAM) in December. She was a jury member at the festival and told us in an interview: “I like doing a film where I am uncomfortable and I remember reading the script and feeling uncomfortable. What you feel about the film or the end of the film reveals a lot about you, something will change.”

Following the premiere in Cannes last year, ‘Sir’ (‘Monsieur’) received the Gan Foundation Award for Distribution which was given to Diaphana Distribution, the French distributor of the film.

“Love can be a form of resistance. It is the message of this delicate film which invites us to dream further, to go beyond the roles attributed to us at birth, to live our utopia, to see it one day, to come.” said Dominique Hoff, general delegate of the Foundation, at the time.

The film has been released in US and Europe (France, Germany, Switzerland, The Netherlands, Hungary, Italy and Germany) and is due out in Argentina, Sweden and Japan whilst a DVD came out in June, so UK audiences are in for a treat.

‘Sir’ has already notched up over 12 awards, including Best Film and Best Actress at the New York Indian Film Festival, 2019; four audience awards (at the Saint-Jean De Luz Festival, 2018, Festival Du Film De Cabourg, 2018 to name a few), Perhaps it may win LIFF audience award too!