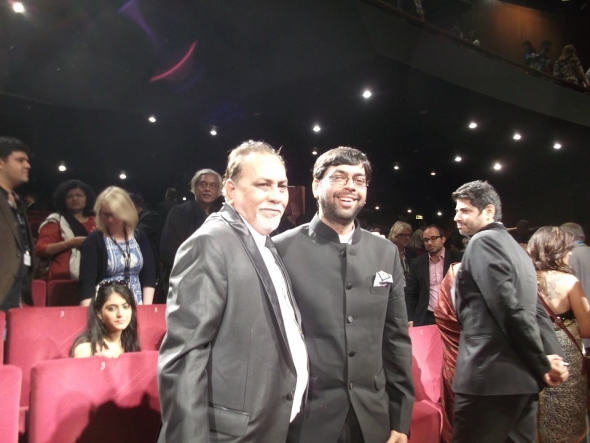 THERE was a sense of elation and excitement at the Cannes Film Festival today (May 20) as the curtain came up on India’s only selected entry into any of the official competitions for features here.

Kanu Behl, the director and several members of the cast of “Titli” took centre stage at the Debussy theatre in Cannes at its first screening.

There were huge cheers and ringing applause and shouts of “bravo” as the film finished and the final credits rolled (see video below).

Behl as a first time director is up for a possible Camera d’or. The Un Certain Regard section recognises rising talent and great promise.

He told www.asianculturevulture.com “It is about family and it just happens to be about a family of criminals.”

“Titli” takes place in east delhi and in the home of three brothers and their widowed father.

Their main source of income is carjacking and they are led by eldest son, Vikram.

‘Titli’ refers to the youngest – played by Shahshank Arora in his first major screen role – who is keen to break free from the violent clutches of his two elder siblings.

He was so named (meaning butterfly) by his late mother. She desperately wanted a girl but stuck with the name despite giving birth to her third son.

Reaction after the film

There is a twisting plot and the film revolves around Titli’s plan to break free and give his new wife, Neelu, the life she so desperately craves. But all is not what it seems.

At almost every level, the characters are compromised and have agendas of their own and there is a sense in the story of the sins of the fathers coming back to haunt them.

This is the reality of India for some Indians, and it isn’t at all pretty and the film has a dark edge, which is somewhat softened by an unexpected and optimistic ending (anything more and the film’s integrity might be questionable).

It’s well made and accomplished despite being from a first time director and containing many non-professional actors. It is co-produced by Dibaker Banerjee, and his production house, DBP Production and Yash Raj Films (India). Banerjee is regarded as one a new generation of Indian directors making non-Bollywood movies in India.

Behl, who co-wrote the Indian cult hit, “Love Sex Aur Dhoka” (2010), talked to www.asianculturevulture.com about the experience of making the movie – which is improvised in large parts, allowing for a more naturalistic and ‘documentary’ style narrative.
Behl has spoken about this in an interview to be published shortly on www.asianculturevulture.com; he also talks about what led him to the world of “Titli”, the reaction in Cannes and what he is doing next.

Main picture: Kanu Behl (right) with father Lalit who plays patriarch in ‘Titli’ after the first screening at the Cannes Film Festival 2014

The layout of this article has been changed 22.08.2017 (in line with a change in hosts and coding)