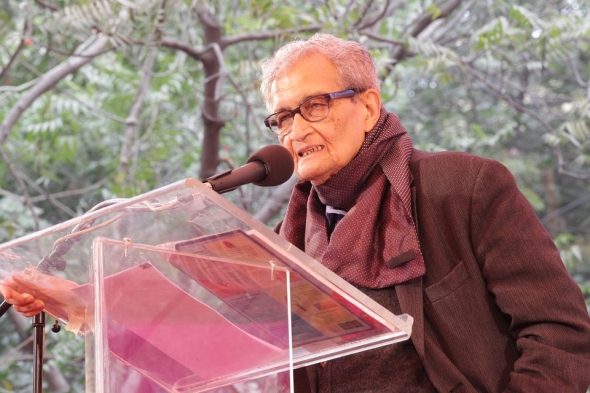 THOUSANDS of people who love books and the world of ideas were treated to hearing some of the biggest names in their fields on the opening day of the Jaipur Literature Festival today.

Billed as the world’s largest free literary festival, organisers expect to welcome more than 200,000 people to the festival, which takes place at the Diggi Palace in one of India’s oldest and most popular tourist cities.

Also attracting a substantial audience was Irrfan Khan, the Bollywood-Hollywood star who grew up in the city.

Most events were full with standing room only as many Indians took advantage of the opportunity to hear and be close to some of the literary world’s most exciting names.

Dr Sen’s opening address very much concerned itself with India and its politics (in what will be an election here).

Steinem spoke passionately about the need for both women and men from around the world to join together in the struggle for gender equality.

Aslan spoke about his American upbringing amidst the tensions of Iranian-American relations and Franzen on how he turned his back on the advice most writers hear when they first start out, “don’t tell, show”.

But it was undoubtedly Sen who was the star for the large number of Indians at the festival.

He was accorded a standing ovation for his allegorical, playful and humorous ‘a wish a day for a week’.

Dr Sen delighted the crowd with his imaginary conversation with “the god of medium-sized things”, who was in a position to grant him certain wishes.

On the left and liberal, the much travelled professor of economics delivered a simple but compelling agenda for change.

He called on Indians not to be defeatist and said the solutions to their problems lay with themselves and it was not a hopeless task.

He held up economic progress in the southern states of Kerala and Tamil Nadu as examples of this.

“Indians can do things if they put their minds to it,” he declared.

He said there needed to be more of an emphasis on the humanities in the Indian education system.

It was a point he elaborated on in a later session with UK publisher John Makinson, urging India to reform its educational system.

“Hardly anyone studies Sanskrit or ancient Persian or Urdu,” he lamented. “There is a bias towards business-orientated studies.”

He said he wished there was a “pro-business, pro-market party that was not parasitic on religious politics”, referring clearly to the Bharatiya Janata Party (BJP), which very much appears poised to take the over the government in May after a General Election. Most commentators expect the BJP to win but govern in coalition.

The party’s prime ministerial candidate, Narendra Modi, remains one of the most divisive figures in Indian politics.

Dr Sen said a secular right-wing party had existed shortly after independence but had disappeared and needed to be revived.

For him too, not enough attention was being paid to the really poor or destitute.

Too many of the country’s resources were lavished on the middle-class in the form of subsidies from diesel to cooking fuel, he argued.

He reminded his audience, a third of the population had no access to electricity and 50 per cent of Indians continued to defecate in open spaces because they had no toilets.

Food subsidy programmes and employment schemes on the other hand registered not even a per cent of the government’s total spending, while electricity and fuel took up at least one per cent.

He also called on the parties of the left in India to abandon their desire to fight “American economic imperialism”, accusing them of fighting an “antiquated” battle that the rest of the world had ditched years ago.

He caused much mirth too when he called on “the god of medium things” to effect “the reversal of the reversal”, referring to a recent Supreme Court decision, reinstating section 377, outlawing homosexual relations in India.

His musings were all prompted by recent news reports that India had joined an elite global club.

He said it was not immediately apparent what this club was – it turned out to be a particular form of satellite which was described in the paper by its serial number, GS18-14.

It highlighted for him too the role of the Indian media which was not focused enough on the country’s problems of destitution and abject poverty.