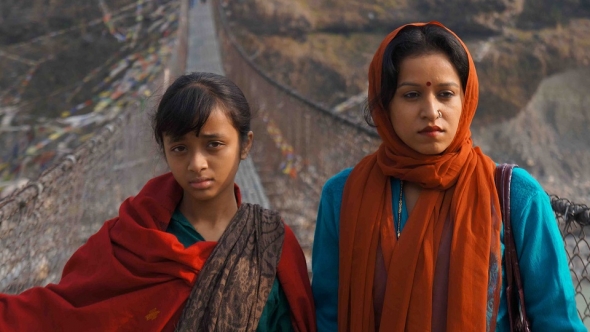 Europe’s biggest and best South Asian film festival hits our screens next month and www.asianculturevulture.com has something important to announce in relation to this…

MORE than a little Hollywood glamour is coming to this year’s biggest and best platform for Indian and ethnic films in Europe.

Star of “The Fall” and “The X-Files”, Gillian Anderson is among the top names to grace this year’s fifth London Indian Film Festival, which opens on Thursday, July 10 at Cineworld on The Haymarket, London.

Anderson stars in “Sold”, produced by Oscar and BAFTA winner actor Emma Thompson. A fictional tale based on reality, it courageously and dramatically uncovers the grim child trafficking trade between Nepal and Kolkata.

There is also the much anticipated big screen outing for TV “Mad Men” star Jon Hamm. His appearance takes the festival’s gala centre screening with Disney-produced, “Million Dollar Arm”, based on the real life story of two Indians recruited to professional baseball in the US.

And to mark this year’s fifth anniversary, and the great work the festival has done in promoting both Indian and British Asian films, there’s a special event we are hosting.

www.asianculturevulture.com has partnered with the London Indian Film Festival to present, “Hank & Asha”, a delicious award-winning romantic comedy, charting the joys and travails of modern dating. The film is a big favourite of those who have been lucky enough to see it!

It won the audience award at Slamdance, one the of the US’s biggest and most prestigious independent film festivals last year and www.asianculturevulture.com and the London Indian Film Festival are very proud to be hosting its European premiere at the Institute of Contemporary Arts (ICA) in London on Friday, July 11.

We are delighted to be welcoming the film’s director James E Duff to the ICA for a Q&A following the screening of the film.

You can win free tickets in an exclusive www.asianculturevulture.com competition and attend our very own special VIP drinks reception following the European premiere.

Details of the competition are HERE.

Another one of the top names to be attending the festival is Bollywood singer-actor-director Farhan Akhtar.

The versatile and multi-talented Akhtar, who so memorably reprised the role of Indian athletics legend Milkha Singh in the biopic “Bhaag Milkha Bhaag”, is likely to be in revelatory mood at his screen talk at the BFI Southbank on July 16.

Also giving a unique insight into the Indian film industry will be cinematography supremo, Santosh Sivan.

The much decorated Sivan has a wide filmography, encompassing regional Indian cinema in both Malayalam and Tamil, as well as such work on the acclaimed, “The Terrorist” (1998) Shah Rukh Khan’s “Asoka” (2001) and Gurinder Chadha’s “Bride and Prejudice” (2004) and the Aishwarya Rai starrer, “Mistress of Spices” (2005) set in the Bay Area of San Francisco and directed by Paul Mayeda Berges, Chadha’s husband.

A film that has been much anticipated in the UK after being showered with praise and plaudits, including an audience award at Toronto International Film Festival last year is director Anup Singh’s “Qissa: The Tale of a Lonely Ghost” We spoke to him then. It comes to the festival on July 12 with festival favourite from 2013 Irrfan Khan in the central role.

The eight-day film extravaganza closes on July 17 with the world premiere of “Hemalkasa” – a tribute to the social activist and reformer Prakash Baba Amte, who as a doctor went into interior Maharashtra and helped to treat tribals, setting up a number of pioneering projects. He will be played by Indian star Nana Patekar.

As well as the films, there will be a chance for industry professionals to network, exchange ideas and make vital connections, with special events at BAFTA and ‘Guru Lounges’.

The winner of the Satyajit Ray Short Film Competition will also be announced at the festival’s close and a screening of the entries will take place at the ICA on July 15.

Among the other film highlights are Pakistani thriller “Anima State”, “Apur Panchali” which tells the story of what happened to the little boy (Subir Banerjee) who played Apu in Satyajit Ray’s iconic “Pather Panchali” (1958); “Shongram”, about love across the religious divide as the stirrings for Bangladesh become ever louder and more violent in 1971.

Also on the billing is “An American in Madras” is a documentary about American-born filmmaker Ellis R Dungan, who goes onto become an important figure in Tamil cinema in the 1930s, despite not knowing any Tamil; “Sulemani Keeda” (‘Writers’) features two young writers who dream of making it big in Bollywood and has a number of stars playing themselves in cameo roles; and “Ulidavaru Kandante” (‘As Seen by the Rest’) is a Kannada language film that explores five interconnected stories and pays homage to “Sin City”, “Pulp Fiction” and “Rashomon” to name just three of several referenced.

The main sponsors of this year’s London Indian Film Festival are Queen’s Award for Enterprise International Trade winner Sunmark Ltd, producers of Pure Heaven brand and founding sponsor Grange Hotels. The festival is also grant funded for by the BFI Film Festival Fund. You can see other supporters (including us) here.

Selected highlights from programme at a glance (for full programme, please see http://www.londonindianfilmfestival.co.uk/programme.htm)