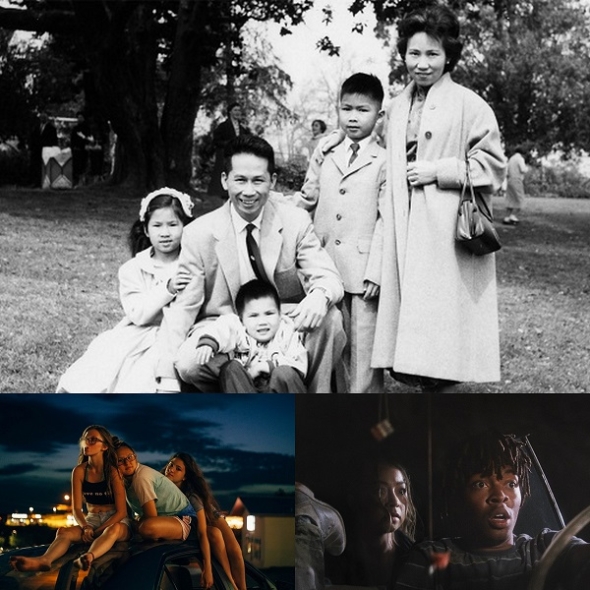 IF YOU LIKE powerful, profound and moving documentaries about writers – you will love this.
There isn’t anything not to like – directed by the late James Redford (who died in October 2020 from cancer and is the son of Sundance founder and Patron Robert), this was clearly a labour of love.
If you have seen Tan as acv has (at the Jaipur Literature Festival 2017) talking – you will recognise the charming personality, whose family history makes for both compelling reading and viewing.
Redford’s skill is to bring to visual life much of what is covered in Tan’s book of the same title as this film, published in 2017.
This is a great American story – be in no doubt.
Tan’s parents left China emigrating to the US and raised a family – but both her father and older brother died within weeks of each other, also from cancer. She and a younger brother and mother then spent time in Europe before returning to the US.
Tan only learnt about her half-sisters in China significantly into her adulthood – her mother had been the fourth wife of a ridiculously wealthy and vile man.
Using home cine film, video and family portraits, this is all stitched together with great skill and effect and Tan’s own insightful, sometimes emotional narrative pushes it all along nicely.
It is quite the story – if you wrote a novel with these elements, readers would revel in such an imagination.
For Tan, it is reality and so too is her worldwide fame and wealth as an author – whose journey began with a novel, ‘The Joy Luck Club’ in 1989. Excerpts of the film released in 1993 appear in this film along with illustrations and drawings – including some of Tan’s own.
It’s beautiful, if a tad drawn out by the end. Still, it is well worth watching.
ACV rating: **** (all out of five)
First screened on Tuesday (February 2)

TO BE UTTERLY frank, this wasn’t on my radar, but as what happens when you’re physically at a festival, sometimes there is a window*.
And into that digital window dropped ‘Cusp’. It looked like a US teen coming of age saga centred around three 15-year-old girls living in Texas. It wasn’t fiction, but a ‘cinema verité’ style documentary depicting the 2019 summer for three girls.
It was an extremely hard watch – this is reality for three girls, whose families do not have a lot of money, and are trying to a find a sense of themselves, amidst the perils of difficult family relationships, sex, abuse, toxic masculinity, drugs and guns.
These subjects all form an almost inseparable backbone narrative of their own – as the girls are never far away from them.
Young filmmakers Parker Hill and Isabel Bethencourt have produced an unflinching and mostly sympathetic portrait – but to some like this critic, it is still a bleak presentation. This assessment is more about the choice of content and editing, and not an aesthetic judgement – there is some stunning photography and the friendship is well documented.
ACV rating: **½
First screened on Saturday (January 30)

ZANY, comic, and screwball, ‘First Date’ was fun, if a little light on being about anything very much.
It should have been the movie that fell into my window (*see above).
We do all need films like this – and in its two young central characters – ‘Mike’ or ‘Mikey’, played by Tyson Brown in his first ever speaking role – and ‘Kelsey’ reprised by Shelby Duclos, we have two winning and very likeable leads.
The premise is quite simple – slightly tongue-tied and socially awkward Mikey musters the courage to ask fellow high school pin-up and boxing enthusiast Kelsey out on a first date. To impress her, he feels he has to have a car and purchases a shake-rattle-metal-and bone 65 Chrysler and in doing so gets himself mixed up in some weird goings-on, an eccentric crime syndicate, deranged cops and an unusual and very long night. You have been warned. Fun.
ACV rating: ***
First screened on Sunday (January 31)

Privacy & Cookies: This site uses cookies. By continuing to use this website, you agree to their use.
To find out more, including how to control cookies, see here: Cookie Policy
← Bollywood asianculturevulture vibes – It’s all going OTT and how Akshay Kumar shoot has got everyone talking…
Black, Asian and ethnically diverse theatre artistic directors and cultural leaders write open letter and call for diversity to be part of dialogue as government considers revival of sector… →