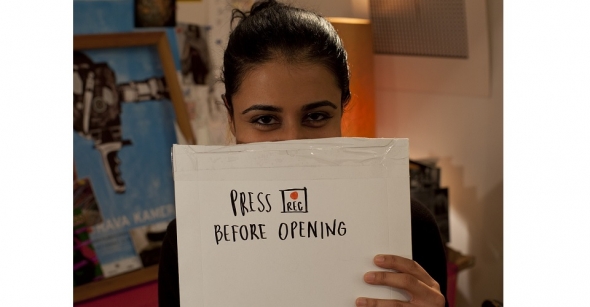 TO MARK this year’s fifth anniversary, and the great work the London Indian Film Festival has done in promoting both Indian and British Asian films, there’s a special event we are hosting.

You can win A PAIR OF TICKETS to the European premiere of “Hank and Asha” at the Institute of Contemporary Arts and a www.asianculturevulture.com VIP drinks reception after the film’s screening at 6.30pm on Friday, July 11.

You can alternatively send a mail to editor@asianculturevulture.com with ‘Hank and Asha’ in the subject line and say how you came to know about us and leave a contact telephone number.

To qualify for the grand draw, you must do any of this by 10am on Friday, July 4. We will notify the winner only by Tuesday, July 8. You must be 18 and resident in the UK.

More details about the film below.

www.asianculturevulture.com has partnered with the London Indian Film Festival to present, “Hank & Asha”, a delicious award-winning romantic comedy, charting the joys and travails of modern dating.
The film is a big favourite of those who have been lucky enough to see it!

It won the audience award at Slamdance, one the of the US’s biggest and most prestigious independent film festivals last year and www.asianculturevulture.com and the London Indian Film Festival are very proud to be hosting its European premiere at the Institute of Contemporary Arts (ICA) in London on Friday, July 11.

We are delighted to be welcoming the film’s director James E Duff to the ICA for a Q&A following the screening of the film.

A special preview of the film will be published on www.asianculturevulture.com very shortly…what are you waiting for? We’d love to see you!

Here’s a trailer…enjoy! Good luck and see you on the other side!

Privacy & Cookies: This site uses cookies. By continuing to use this website, you agree to their use.
To find out more, including how to control cookies, see here: Cookie Policy
← ‘Not Today’s Yesterday’ – Seeta Patel’s Bharatanatyam ‘fairy tale’ has important story to impart …
‘The True Cost’ – killing for fast fashion? UK Asian Film Festival (Tongues on Fire) and The Circle host powerful screening…. →