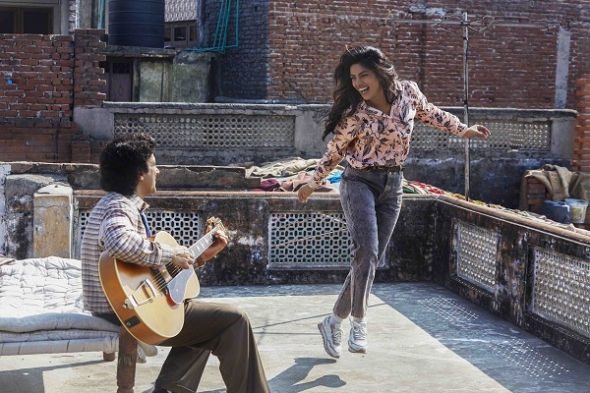 FILM lovers get ready – London Film Festival (#LFF) is almost upon us!

It all gets under way next week on Wednesday (October 2) with a film to warm the coldest of hearts – ‘The Personal History of David Copperfield’.

With Dev Patel in the lead role it cannot go wrong – and it doesn’t.

We saw it at its world premiere in Toronto at the Toronto International Film Festival (TIFF) earlier this month. We got to speak to Patel and director Armando Iannucci and some of the other leads. There’s an all-star British cast – that includes Hugh Laurie, Tilda Swinton, Peter Capaldi and Ben Whishaw – to name just a few.

It’s a joy – and Patel was born to do it… the six-year-old in him could not have dreamt that one day his name would be in bright lights playing ‘David Copperfield’ – but Iannucci translates Dickens’ wisdom and essential decency (and wit and comedy) to our own time with skill and art.

There are four screenings in all – you can see one on the same evening as the Gala Opening but at a later time at the Embankment Garden Centre (next to Embankment Station) – there’s an afternoon screening the next day at the same venue and one final showing at the Empire next Saturday (on October 5). Our review is here.

Another film we covered in Toronto and is something of a late addition (we believe – it is not listed in the LFF brochure) is the film, ‘Harriet’.

British US theatre Tony-award winner Cynthia Erivo gives what could well be a career-defining performance in this film about the great anti-slavery hero that is Harriet Tubman. Born a slave, she freed herself against the odds and risked her life several times to return to the South to collect members of her family and others determined to seek a better life. Inspiring, awe-inducing and uplifting – don’t miss it or Erivo – has Oscar written all over it!

Of the big releases at TIFF, the Indian film, ‘The Sky is Pink’ leads the Indian charge.

It’s not quite clear what talent from the film will head to LFF – Priyanka Chopra Jonas is not on the official LFF celebrity/talent list.

Chopra plays the mum character, while hubbie is essayed by Farhan Akhtar, who talked to us about his role in this interview at TIFF. It’s a love story – with terminal teenager patient Aisha Chaudhary, played by Zaira Wasim, narrating the story of her on-screen parents.

Of the other South Asian films making their way here – there’s also ‘Axone’ (at 6.15pm on the opening day, October 2 at Tottenham Court Road); ‘Jallikattu’ takes you to a heart of darkness of Conradian proportions with Kerala ‘bad boy’ (as described in the LFF brocuture) director Lijo Jose Pellissery in the director’s chair. Pellissery is a pussycat in real life – we have an interview with him, where we explore his cult horror offering. The film screens on Thursday (October 3) and Saturday (October 5).

‘Made in Bangladesh’ charts the journey of garment workers from anonymous units of production to defiant and proud women who won’t be trampled on and find a voice. It hits LFF next Monday on October 7 at Vue in Leicester Square and then again at the NFT, Southbank on Tuesday (October 8).

This absolutely charmed TIFF and now has the chance to do the same in London – the gentle but evocative and powerful ‘Bombay Rose ’ comes to LFF. It had its world premiere at Venice in August.

A few years in the making and an animated labour of love about Bombay, dreams and stardom and star-crossed and cross-cultural love, it’s an ode to a different era altogether. It gets a special presentation – next Saturday (October 12) at Soho, and then again on Sunday (October 13) at Vue in Leicester Square. If the weather is awful – seriously, transport yourself to another world altogether. You will be seduced.

Speaking of seduction, ‘The Gold-Laden Sheep and Sacred Mountain’ promises heady views of the Himalayas and a tale that both exercises mind and soul. It screens on Sunday (October 6) and next Tuesday (October 8).

Last but certainly not least, can you afford to miss Rubika Shah’s ‘White Riot’?

There was a time when musicians such as Eric Clapton sang the praises of Enoch Powell and considered repatriation a noble cause. Out this unholy musical mess, Rock Against Racism emerged, turning young people away from nationalism and dodgy haircuts to love and upliftment of all. See it on Saturday (October 5) at Soho, or Sunday, the next day, at Prince Charles Cinema in Leicester Square.

10 films to see at LFF – in no particular order...
The Personal History of David Copperfield (Sold Out, so 11 here); Harriet; The Sky is Pink; Bombay Rose (review to come); Made in Bangladesh (review to come); Jallikattu (director interview to come); White Riot; Jojo Rabbit; Honey Boy; Rocks ; Bacurau

All listings and further info: https://whatson.bfi.org.uk/lff/Online/