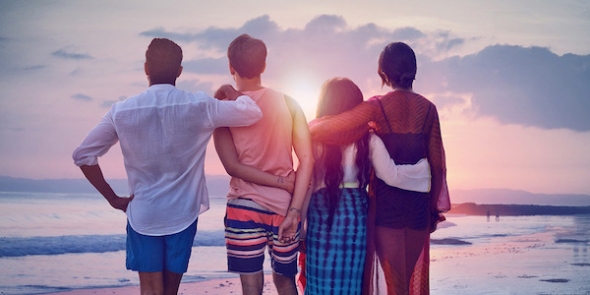 It’s not as morbid as it sounds and is lifted throughout by Aisha’s quirky, funny, cheeky voice…

DIRECTOR Shonali Bose is making something of a name for herself in tackling subjects most Indians would shy away from at very the outset.

Her last film dealt with disability as ‘Margarita with a straw’ (MWAS), released in 2015 and following film festival premieres in Toronto and London, explored the trials and tribulations of someone with cerebral palsy (Kalki Koechlin playing the lead part).

This film, ‘The Sky is Pink’ (‘TSIP‘) explores death and a life tragically cut short by illness but only in name as a headline that gives you some idea of what it is about.

It actually goes deeper and asks some difficult and awkward questions, which many Indians (and not just Indians, it should be said) tend to avoid…

Aisha Chaudhary is the young person in question, quite early on in the film, she reveals her own demise.

It’s no revelation – as she is describing her parents’ journey essentially from meeting to having children and losing them – to being two people bound together by an essential bond, despite the huge setbacks. At one level, the film is about this – sustaining and nurturing a love that will be challenged and tested, but this film goes deeper than just this.

Both ‘MWAS‘ and ‘TSIP‘, also exhibit a cheeky and playful tone on the subject of sex. In ‘TSIP‘, Aisha refers to her parents’ sex life and at one point asks her mother (Aditi, played by Priyanka Chopra, about her parents’ first time together).

In MWAS, the lead character wants and nurses the desire to have an active and fulfilling sex life and does indeed achieve her ambitions and manages to leave behind her hang-ups and neuroses surrounding her own physical disability. (Realistically, it is not about overcoming such issues in a fairy-tale way, but managing and accepting them).

In TSIP, similarly, Aisha, has a very practical outlook on life and it’s quite disarming – yes, she is going to die, but her point is to make the most of her time here – and it’s a very heartwarming and uplifting tale on that score.

She becomes a motivational speaker, writes and paints a lot and starts to have an impact on others and reminds them powerfully, that life is for living.

All of this is beautifully handled on an emotional level in the film – no one goes over the top and the grief and distress is always punctuated by humour and an essential love that exists between Aisha, her parents and her sibling.

They are a tight family unit as many Indian families, large and small, are. Her nicknames for her parents is just one of the many small things that endear you to her in the film. She calls Mum ‘Moose’, Dad, ‘Panda’ and her older brother ‘Giraffe’.

Chopra Jonas and Farhan Akhtar and Rohit Suresh Saraf (as Aisha’s older brother) are all good. Akhtar is the lynchpin and has the most screen time, it seems. He’s pitch perfect.

But the real star is Zaira Wasim as Aisha. She really imbues a quiet charm and power and her overlaid commentary is one of the reasons why this films works and holds together.

It does jump about a bit in time, going from 2015 for a segment and then back to 2009 and hops about more than once.

In the end, it doesn’t matter too much because the final stretch is all one time period and you have begun to care about this family and its fate, even though you know what is coming.

It’s this that gives this film its essential strength and power – the four as a family have won your heart. And you appreciate just how much pain there will be when Aisha does shuffle off her mortal coil.

Bose doesn’t avoid the pain of that – but her skill is to remind us that life not only has to go on, but this family would be letting Aisha down, if it remained in mourning and sadness – that is not what Aisha wants. Everyone is cherishing the live lived…

In our short interview on the red carpet (see below please), Bose makes some powerful points.

We need to talk about death, sex, relationships, feelings and families more than we currently do.

In a sense, she is urging us to stop hiding behind these taboo subjects – if we want the fulfilling life as Aisha says, more or less, we have to seek it without fear – and despite a short time here, she has left a legacy. A wonderful one which Bose’s film does justice to – on many different levels.

•It’s a shame that Wasim no longer wants to act and renounced her career as being incompatible with her faith. She certainly gave no hint of this when she spoke to acv in December at the International Film Festival and Awards Macao – IFFAM) and her talent in this film is there for all to see.

The Sky is Pink Red Carpet

Privacy & Cookies: This site uses cookies. By continuing to use this website, you agree to their use.
To find out more, including how to control cookies, see here: Cookie Policy
← Waltham Forest Mela musical extravaganza and more as London Borough of Culture seeks to entertain…
‘Noises Off’ – Meera Syal steals show in riotous revival of near 40-year-old Michael Frayn play… →